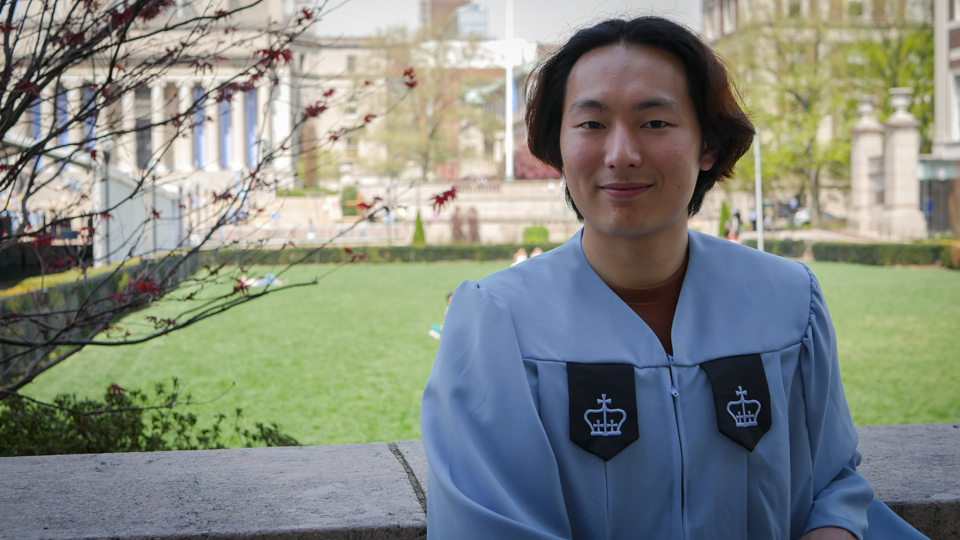 Joon Baek, CC ’21, reflects on his Columbia journey and his time advocating for international students on the Columbia College Student Council.

Last summer, Joon Baek, CC ’21 and president of Columbia College Student Council, woke up to dozens of texts from other students regarding the new U.S. Immigration and Customs Enforcement rules that threatened deportation and banned reentry for students whose institutions were operating entirely online. By the end of that day, he had organized an emergency town hall meeting for international students at Columbia. By the end of that week, he was speaking at a press conference with New York Attorney General Letitia James.

Baek’s start on CCSC was far less tumultuous. After joining in the spring of his first year, Baek had to return home to Seoul, South Korea for the two years of mandatory military service required of all male Korean citizens. While Baek began his studies at Columbia in the fall of 2015, he returned to the United States in 2018 under a new president and an entirely different landscape for international students.

“When I came back as a sophomore, I realized two things,” Baek said. “First, a lot of people I knew beforehand had either graduated or were about to graduate, so I [needed] to start reaching out. Another thing I realized was that … there were a lot of visa-related issues that I had to go through, and that kind of got me interested in, OK, like, why is ... responding to my emails so hard, so hard to reach out, why are these kinds of processes so convoluted. So that’s how I got interested in advocating for international student causes.”

“It was a new position, which basically meant that I [could] bring new ideas and new initiatives onto the table. It wasn’t defined by what previous people did—I really like that sense of flexibility,” Baek said.

Baek’s time as a student-leader also revealed the extent to which many international students share a profound sense of common identity that goes beyond their ties to Columbia or shared nationalities. He points to the particular sense of camaraderie that was built under the Trump administration and the accompanying legal and policy battles as experiences that made the community feel that its existence at Columbia was a tenuous reality.

“Even before Trump got elected, there always has been an undercurrent of xenophobia in American politics. You know, I wouldn’t say Trump invented [that],” Baek said. “But one thing is definitely sure is that his presidency really made … less welcoming American people.”

Among the many challenges for international students which Baek sought to ease, he focused on unraveling the bureaucratic hassles associated with securing work authorizations for internships and post-graduate opportunities. Among his other initiatives, his favorite accomplishments include the creation of a summer course for international students with internships so that they could follow the stipulations of their student visas, which made the entire process and cost of securing work authorization much simpler. He also highlighted leading the student council virtually as they secured policy goals to ease mental and financial burdens on students.

Solidifying changes in University policy was often difficult, and one of Baek’s favorite strategies was catching administrators by surprise at University events.

“When I first joined the Council, [it would be] writing op-eds for Spectator, or going up to the administrators at these fancy events and say, ‘Hey, can you make this course?’” Baek said. “And it’s like ‘Oh!’ you’re kind of caught by surprise at a John Jay event—those kinds of meetings with administrators to try to get things done.”

In addition to his accomplishments on CCSC and in advocacy for his “international family tree,” Baek used his time at Columbia to pursue varied interests. When asked about the most important aspects of his time at Columbia, he cites experiences as wide-ranging as eight semesters with the experimental theater group Latenite and a religion research project with professor Mark Taylor.

As for his motivation during difficult times at the University?

“The bottle guy [on Low Steps], somehow,” Baek replied. “He always gave me hope and purpose. Whenever I was fed up with my finals, I see that guy do his flip that goes into this trash can, and I’m like, ‘You know? Maybe life is worth it.’”