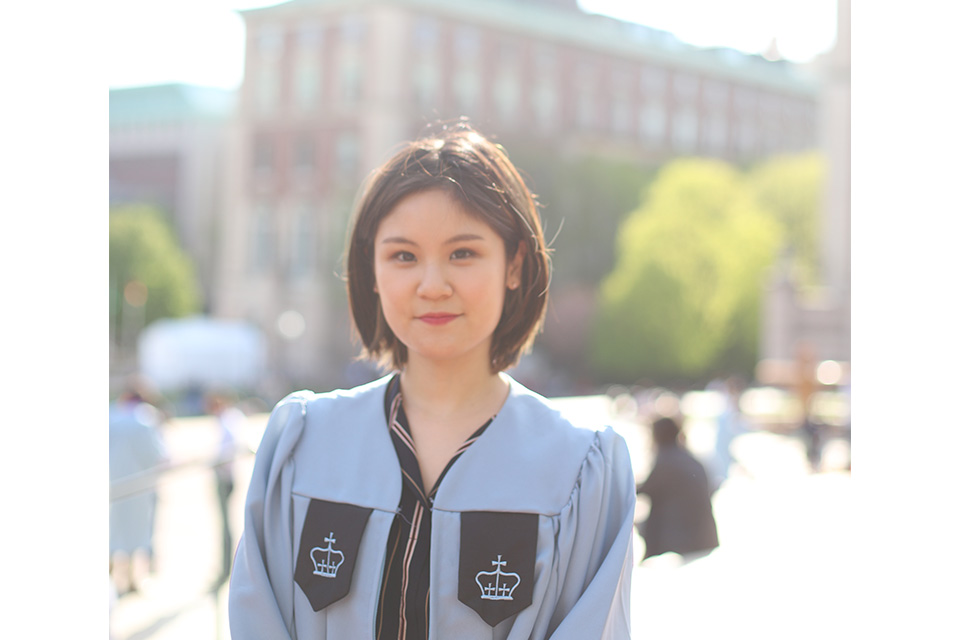 Audrey Oh, CC ’21, wrote her senior thesis on the history of Columbia’s Center for the Study of Ethnicity and Race. “A Protest, Ongoing” examines the “Origins and Historical Challenges of Columbia University’s Ethnic Studies,” particularly the 1996 student hunger strike that caused the University to establish the department.

“When I began this project, I expected to find something of the following: a revolutionary lineage of student activism culminating in a strike that was so impactful as to convince a dogmatic academic institution to change its long-set ways,” wrote Audrey Oh, CC ’21, as she reflected on her senior thesis project. “What I got is something much different.”

Oh is graduating this year with a degree in race and visual culture offered by the Center for the Study of Ethnicity and Race. Her thesis, “A Protest, Ongoing” examines the “Origins and Historical Challenges of Columbia University’s Ethnic Studies,” particularly the 1996 student hunger strike which led to the University’s establishment of the department.

Upon moving to Columbia from South Korea, Oh struggled to find her place and her major at Columbia. “It was all completely new. I had a huge culture shock, a long, long, long, confusing adjustment period where I felt like an outsider to the school, to the city, to everywhere” she said.

In CSER, Oh found a sense of belonging.

“I remember coming into my first introduction to comparative ethnic studies class, which was a global core then, and sort of having this strange moment where I didn’t feel at home anywhere else but in that specific classroom and that specific space and community.”

As a student in CSER, Oh sees herself as “a product of a lineage of the student activism that has continued on since the early mid-1900s to ensure that there is an anti-hegemonic or anti-white-supremacist education in Columbia.” Her process of investigating this lineage for her senior project involved reading about the ethnic studies movement that spread across America in the 1960s and 1970s. Oh also consulted the Spectator archives and the Rare Books and Manuscripts Library at Columbia to learn more about the 1996 activism at Columbia. She then interviewed several alumni who participated in these demonstrations.

Engaging in this research has transformed Oh’s perception of the department. “I realize that the outcome of the ethnic studies protests does not come from the administration. It comes through the individuals who have fought and are still fighting for ethnic studies,” she wrote. “This, in my opinion, is how ethnic studies survives and preserves—its students, as scholars and activists who sit down, notice, analyze, challenge, doubt, share, and struggle against the systems of oppression, altogether become part of this ongoing protest.”

“A Protest, Ongoing” investigates the link between student activism and the establishment CSER, a department that the University was initially against. Through her research, Oh discovered a historical trend of University opposition to progressive causes, culminating in the creation of CSER, which she calls a “center that was built on the foundations of disruption.”

Oh’s research transformed her understanding of the University’s internal practices. “The fact that the school was so active in ensuring that the students don’t get this kind of education was really mind-blowing to me but at this point, I wouldn’t say it’s too surprising” Oh said.

Activism is woven into Columbia’s institutional fabric, and Oh acknowledges that students continue to fight for contemporary reforms. Her historical thesis research informs present-day student activism, and she hopes “the administration will break from its own very outdated tactic and pattern of simply just letting the student organizers and student activism die out as activists finish their education, graduate, and go on their different journeys.”

Oh has also learned to find the humanity in activism and the unexpected connections that arise from student mobilization. “I came to realize that administrative change is not the only aftermath of student organizing, there’s huge friendships that form, there’s solidarity and there’s like a more general agreement among the students on a specific issue like tuition strikes and like actually really paying and being there for our graduate workers,” she said.

The decision to use University resources to conduct research on past institutional failure, particularly as a means of fulfilling the requirements of a University degree, is inherently subversive, Oh thinks. She urges others to follow in her footsteps. “I think there’s enough motivation for students to actually conduct this kind of research, and it should be happening because in a way the research concerns you, very directly,” Oh said.

Oh is a proponent of student activism of all types. As she leaves Columbia, she hopes students will continue to fight for change at all levels and in all capacities. “Even if you’re not at the forefront of the student movement, think about small ways to participate and listen,” Oh said. “That’s all that the student activists are fighting for: one more student agreeing to their demands and agreeing to their causes.”