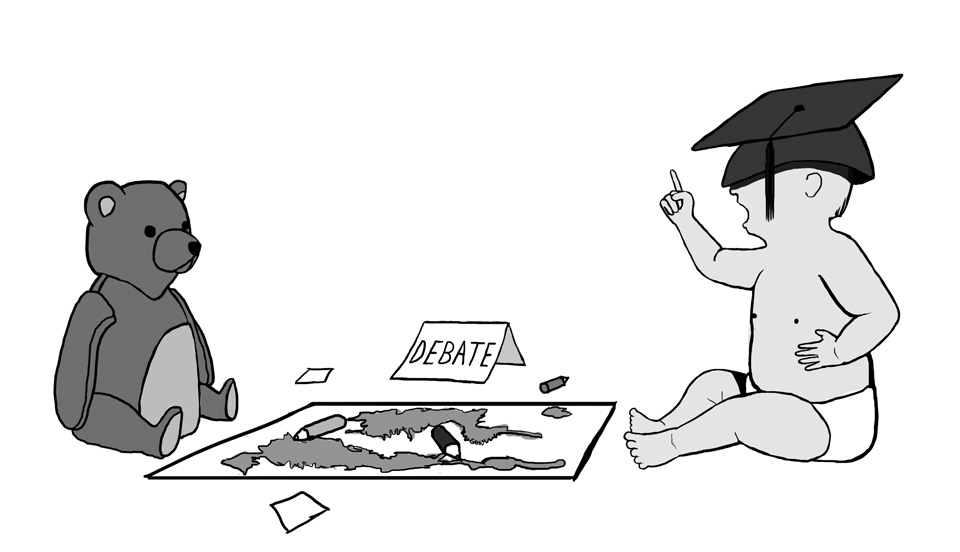 Last week was a busy but sad week for the rendition of the Israeli-Palestinian conflict here at Columbia. Hillel's Student Center for Israel and Zionist Thought put on a student debate about the topic of Zionism, and the Students for Justice in Palestine—along with the Native American Council and other groups—held a panel discussion on education in the Palestinian territories. But while both events happened physically on the same campus, they took place in different worlds: These two events operated with their own vocabulary, co-sponsors, and audience. Last week revealed something we all know to be true, even if we publicly refuse to admit it. When it comes to challenging issues, especially political ones, students at Columbia fail to stray beyond party lines and put aside partisanship for the sake of academic rigor and intellectual openness.

On Nov. 10, Garin Lavi: Hillel's Student Center for Israel and Zionist Thought­—a student group that looks to include all opinions about Israel and Zionism in the conversation—hosted a debate co-sponsored by the Israel establishment at Hillel (full disclosure: I planned the event and spoke on the panel). The debate brought together five students with a range of views on the Israeli-Palestinian conflict. Such voices included Israeli citizens, people who are religious but in doubt of Zionism's legitimacy, and students fully supportive of the American Israel Public Affairs Committee. The panelists engaged in open and heated discussion over the justifications for Zionism, claims of racism, and the connection between Zionism and the land between the river and the sea. But where was the Palestinian perspective? I had attempted to find a Palestinian voice, but my search was mired by the obvious discomfort that surrounded the issue from all sides. And why were there only Jewish—and mostly religious—students in the crowd? Were there any non-Jews, let alone Palestinian students, who were interested in hearing the arguments?

Two days later, the Students for Justice in Palestine hosted "The Miseducation of Settler Colonialism: Challenging School Curricula," part of an annual Right to Education week. The panel featured a Gaza resident involved in researching the Palestinian educational system; a facilitator at alter-NATIVE education, a group aimed at encouraging Native American students to consider pursuing higher education; and an SJP student activist. The event was instructive. Rarely do I have the opportunity to hear from a resident of Gaza in person, to understand the identity struggles of the Native American community, and to consider the educational hardships of Palestinian children born into a conflict that they did not start. Around 75 students attended, but the audience was hardly diverse. Only a handful of pro-Israel students had bothered to attend, and an overwhelming majority of the audience was affiliated or sympathized with SJP and the co-sponsoring organizations. Where was the rest of the Columbia community? And where was the educator from Tel Aviv on the panel to address Israeli school curricula from the Israeli perspective?

From Garin Lavi and SJP's perspectives, these events were successful. But judged on a more challenging rubric, one measuring changing student opinion in the long term and the overall presentation of the conflict here at Columbia, these events achieved little and revealed something worse. It unveiled the unhappy reality that even in 2013, 60 years after the conflict began, two hostile and disconnected camps exist at Columbia. The conversation is not only on the ground in Jerusalem and Ramallah, where bullets and stones fly daily, but also on our own college campus, where we pride ourselves on tolerance, understanding, and virtue. What does it say about our community when the issues that permanently divide people in the real world fare no better on campus—our temporary home and outlet for uncensored, non-political, genuine discourse?

I will not ask Palestinian students to talk to the Israeli soldiers oppressing them, nor will I ask Jewish students to engage with those who seek their state's destruction. But can we not, as Columbia students, discuss the issues that divide us? If the goal of the university is to train citizens capable of a broad view of the world, then our university is failing. We are failing. And it isn't only the events in the Middle East that divide us. The relationship between the campus Democrats and Republicans, for instance, is no better.

On Monday night, for the first time in recent history, there will be an event on campus that presents an alternative to this academically lachrymose picture. Dorm Room Diplomacy: Columbia University, a new chapter that I have been privileged to lend a hand in getting off the ground, seeks to do all that we have been collectively failing to in regards to the Middle East. Looking to actively engage every perspective in discussing the region, DRD hosts weekly video conferences with students in both America and the Middle East. Tonight DRD: Columbia will launch its first event, a roundtable student discussion on America's current and future role in the region. It looks promising. But the event's success depends on students from all sides being brave enough to come and sit at the table.