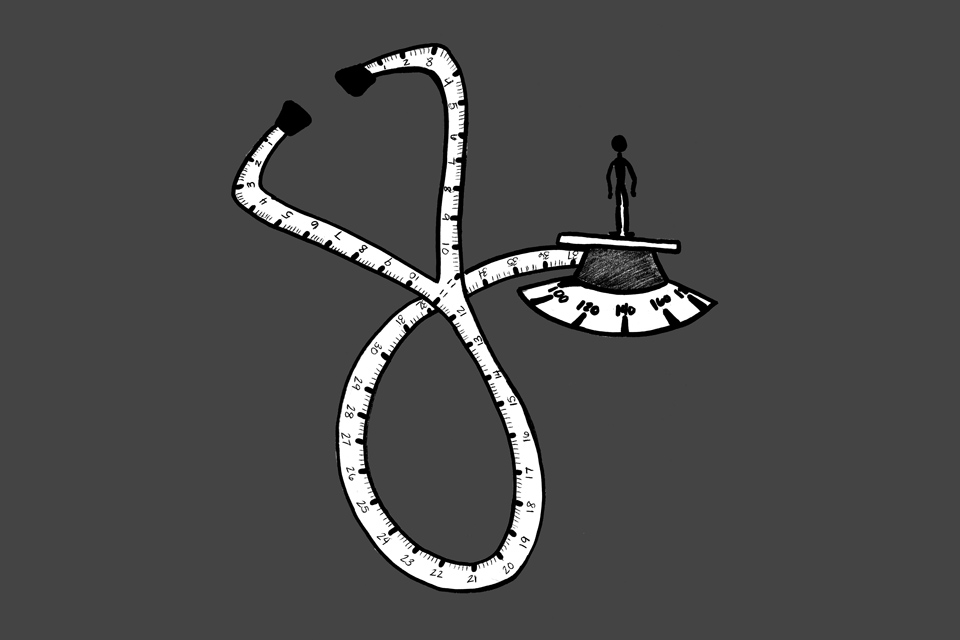 "So it says on your record that you have a history with an eating disorder."

"Yes," I sputtered. I know it's true, but no matter how many times the nurse practitioners read it to me at Barnard Student Health Services, it still feels uncomfortable.

"All right, well, we have a new policy where we have to weigh you once a year. I know we weighed you in the fall, but let's just do it again."

For years, these numbers ruled my world. Every day I would step on the scale, and that determined my worth—which is why in my second year of recovery, I refuse to weigh myself. In the fall, a nurse read the same medical history to me. She told me the same policy, and I stepped on the same scale. I thought I was stronger than the numbers. I've recovered, I thought, it won't bother me. But of course, the number was higher than I thought. Immediately I felt weak and out of control.

Unsure of how to address my weight, the nurse escorted me to the front desk and asked the receptionist for the number of the nutritionist, without even looking at me. The receptionist didn't get the hint. She kept repeating, "But she's here to talk about birth control. I don't understand what you're saying to me." At the time I brushed it off, unsure of what to make of it.

So this spring, I was resigned. I complied, even though I was unsure as to why I was being weighed twice in one year. I stepped on the scale, and as the nurse tried to tell me the number, I shouted, "LA LA LA," like a five-year-old, but I still heard the number.

When I stepped off the scale, she said, "Well, good work. You've lost 10 pounds from the fall, but your BMI still counts as overweight. We have a new policy that states that if your BMI is overweight, you have to be tested for diabetes."

All I could think about was the fact that I had lost weight from the fall, so that made being "overweight" OK. At least I wasn't my previous number. But it wasn't until I left Health Services that I started to really digest what had happened.

It is understandable that Barnard and Aetna are testing for diabetes—BMI is currently how our health is assessed. But the way in which Health Services is handling the topic of weight prevents students from using Barnard's resources.

This isn't specific to me: Health Services should be more well-versed and sensitive when approaching these issues. I talked to several other students, and even students without eating disorders, like Sarah Caputo, BC' 15, have expressed that they've felt stigmatized by Health Services. Caputo exemplified this when she told me that: "Knowing that I will be told I am overweight ... made me so nervous to go to Health Services that I put off getting a flu shot for three months."

A Barnard first-year shared with me that she went to Health Services because she was worried she had suffered a concussion playing rugby. It was her first time going, so her temperature, height, and weight were taken. Then, after diagnosing the student with a concussion—a head trauma—the nurse made it a conversation about her weight.

"Factually, what she was saying was not all wrong, but at that moment I was in pain, scared because I knew I was going to get behind in my school work, and so overwhelmed," the first-year said. "I'm an adult—I came to the doctor for something both specific and serious and felt almost blindsided by the latter half of the interaction."

This incident is by no means unprecedented. Another friend, a Barnard senior, went to Health Services to get paperwork signed for a shoulder surgery. After having her BMI measured, she interpreted the nurse's facial expression as "disgust" as the nurse wrote down the number and asked whether the student exercised. The student informed the nurse that, yes, she exercised. Her upcoming surgery was, after all, to repair a sports-related injury.

The student told me, "She [the nurse practitioner] scowled and said, 'OK, well, do you have a healthy diet?' At this point I was mostly just upset that she made all of these strange assumptions. Every time I've been to Health Services since then, I've been super nervous about what the doctor or nurse will say about my weight, even if I go in for something completely unrelated."

The war on fat is a national one—the concept of health at every size is unfathomable to most. American children are being weighed at school, in front of all of their peers, and their BMIs are being stamped on their report cards. Children are being taught to fear fat and to measure their worth by their weight. In a recent study, the Campaign for Commercial-Free Childhood found that 70 percent of normal-weight high school girls are dieting because they feel overweight, and I can assure you that this sentiment does not disappear the minute they arrive at college.

According to its website, Barnard's Primary Care Health Service has three goals: "To provide excellent clinical health care in a sensitive, non-judgmental and responsive manner. To promote the health of body, mind and spirit within the student community. To educate students to become knowledgeable and effective users of health care."

I think my own experience, and the experiences of so many others, have been counter to Health Services' very mission. Because of the judgmental and insensitive manner with which nurses have handled weight, students feel discouraged from taking advantage of the health care provided. Staff should have a level of clinical sophistication and sensitivity when addressing eating disorders—a common medical problem—and weight. This institutional body-shaming needs to end, so that everyone at Barnard can feel safe in their bodies at the place that is supposed to heal them.

The author is a Barnard College junior majoring in American studies. She is a co-organizer of Body Positivity Week at Columbia.