Integrating art and science by balancing the creative and the analytical

Integrating art and science by balancing the creative and the analytical 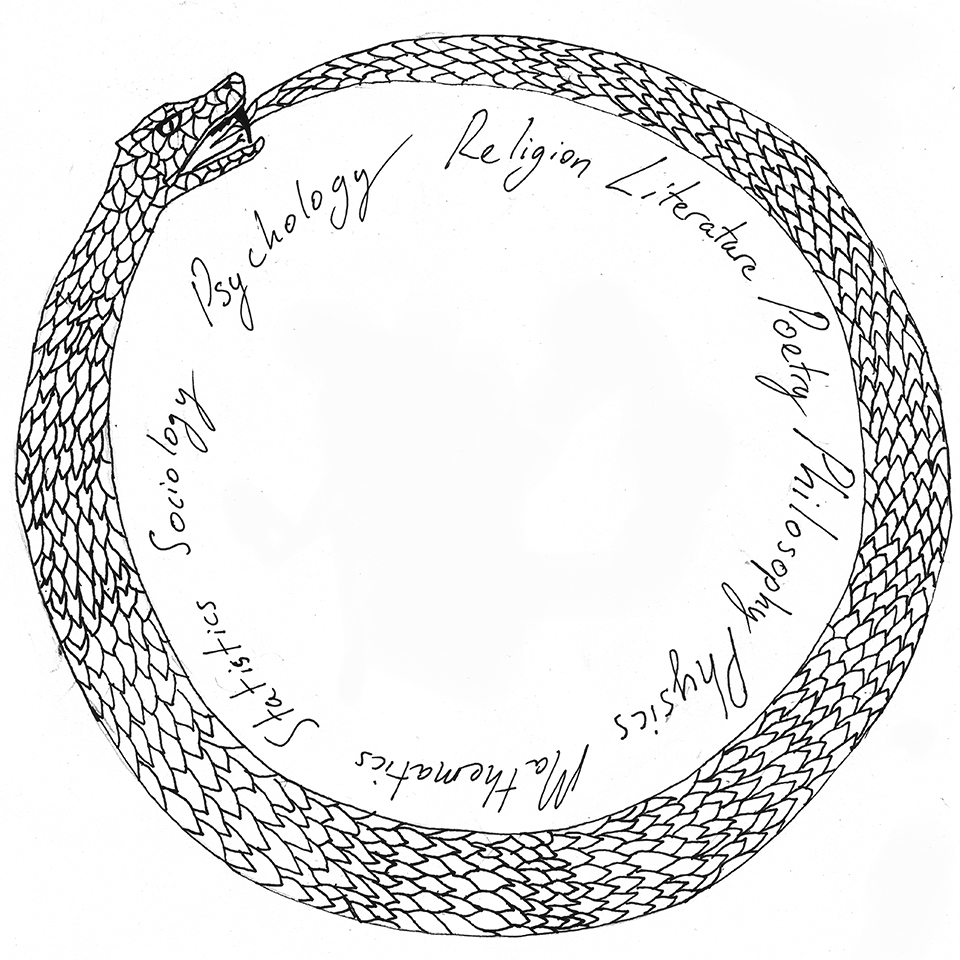 A large off-white tablecloth was stretched unceremoniously over the Wien lounge fireplace, secured at fraying corners with Scotch tape and employed as a makeshift projection screen for "Ouroboros"—one of acclaimed artist Ali Hossaini's latest works of visual poetry. This past Friday's screening featured a deceptively modest setup. Arranged by the Columbia Science Review as part of its annual Science and Art Exhibit, it garnered an equally modest turnout: Only 15 or so undergraduates (some there by accident, some not) were in attendance to enjoy the scaled-down version of Dr. Hossaini's 3D video installation. Merging cosmic, biological, and cultural imagery, "Ouroboros" formulates an integrative chronology of natural history, from the Big Bang to the advent of Big Business, and approximates (pretty convincingly) what a fresco in the "Cathedral of Science" might look like.

The sparse audience and subdued venue made for a highly intimate sort of setting, and we were able to approach the artist with a tide of thoughtful questions, which he fielded gracefully. When asked to offer his opinion on the perceived—and habitually perpetuated—divide between art and science, Dr. Hossaini's answer was particularly resonant. Art, he explained, can operate as a kind of vector—a diagonal, a perfect intermediary—between the objective and the subjective axes, between subjects explored by the empirical sciences and those typically excluded by empiricism (namely literature, philosophy, and religion). He went on to point out an intrinsic similarity between the arts and the sciences, in that good science has a requisite creativity to it: Rigor or discipline will always be secondary to an imaginative hypothesis—an elegantly innovative thesis.

This seems like a self-evident truth: Progress requires imagination, and it takes an incredibly creative—perhaps even aesthetically inclined—mind (Darwin, Einstein, so on) to decipher the workings of less-than-intuitive natural phenomena. In practice, though, art and science are still considered to be largely separate domains, even if they often have the same goal in mind. Both are concerned with developing novel interpretations of the natural order or human experience, and both are limited only by the imagination of the practitioner. Yet artists and scientists still find themselves cordoned off into discrete categories. We need to dissolve the false dichotomy by realizing, per Dr. Hossaini's suggestion, that raw creativity in art (visual, verbal, musical) and ingenuity in science are really two sides of the same coin.

The first and last frontier of interdisciplinary education is to facilitate some interchange of instructional principles between the arts and sciences. In particular, the creative element of science (and the aesthetic element too) are painfully neglected under the current pedagogical status quo. Systems of objective education have a great deal to learn from subjective fields, and while the deficit in meaningful exchange is obvious, little effort has been made to integrate analytical and creative forms of instruction.

The didactic architecture of undergraduate science education, which has persisted for almost a century, is quite good at honing analytical machinery but generally unconcerned with fostering ingenuity or creativity. We should look to humanities-based instructional approaches, which consistently provoke discussion and artistic reinterpretation, for ways to improve the system. Reflecting on my three years here at Columbia, I can, in all honesty, recall only a handful of hard-science courses that forced me to invent the right questions, instead of pushing me relentlessly toward right answers in a predetermined framework. For all its hair-tearing textbook-distilled assessments, the existing science-course archetype requires very little novelty—only a great deal of raw computational power.

[Related: Science has an important role to play in the fundamental human questions of the Core]

You might argue that this brand of education is formulaic only because it needs to be. The aim is to provide us with bare-bones analytical tools that we might learn to apply creatively somewhere down the road (in graduate school, in industry, or during trial-and-error research). But why restrict ourselves in this way? It is possible to address real-world pitfalls and variables, to instruct cooperation, discussion, and creativity, while also laying down the requisite technical groundwork.

The growing field of narrative medicine presents a tentative model for this kind of integrative approach, supplementing instruction in the logistics of biomedical science and practice with adaptive, emotionally grounded storytelling. Here, artistic and scientific ingenuity are realized simultaneously. By merging subjective self-expression—via the written or spoken word—with the usual diagnostic techniques, this approach produces physicians whose creativity and empathetic range are as robust as their analytical abilities. Narrative medicine is a powerful example, too, of how the arts can be enriched when they open themselves to realities of applied science. Stories told by physicians like Atul Gawande now comprise their own genre of popular literature.

But fledgling disciplines like this one have yet to broach the tried-and-true undergraduate formula. We hold fast to the old boundaries between creative and analytical modes of education at our own expense. It isn't enough, ultimately, to place the arts and sciences side by side—there must be some strategic give and take if we want to be truly interdisciplinary.

Kevin Bi is a Columbia College junior majoring in biochemistry. He serves as an executive board member of the Columbia University Wind Ensemble. Primate's Per-spec-tive runs alternate Tuesdays.