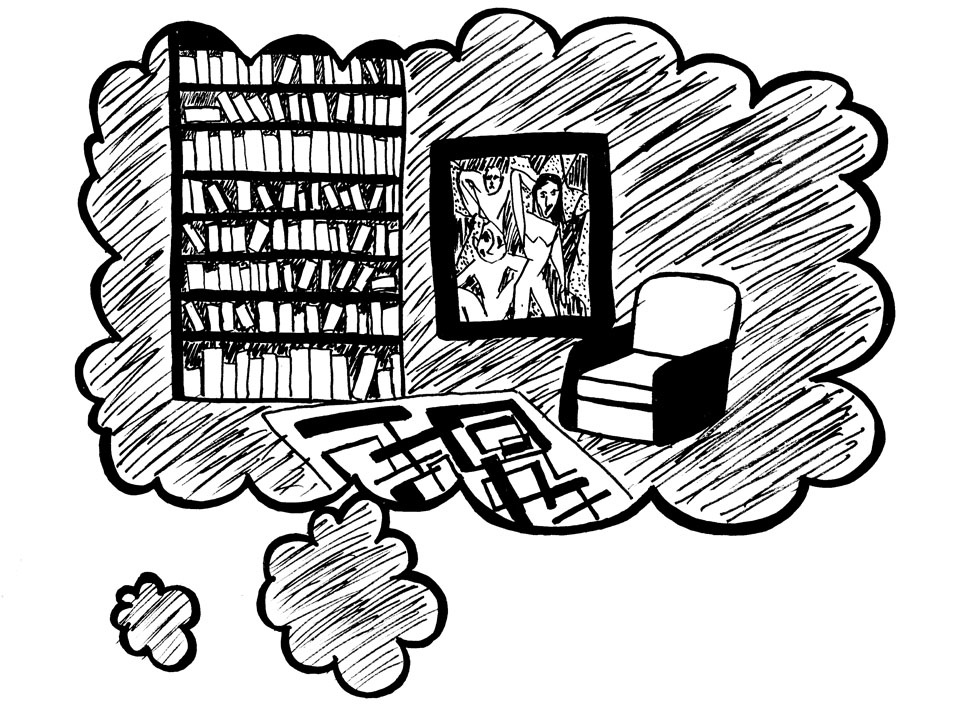 It's got big leather armchairs with brass detailing. Everything is forest green. There are velvet curtains. It's vaguely Butler-esque. There's a fireplace on the right hand side and floor-to-ceiling bookshelves. Each book represents a thought that I've had, a memory that I really enjoy, or an idea that I like to turn over in my hand every so often. Maybe I'm in the middle of class and I have a revelation (as one does in those ever-inspiring seminars). However, because I'm a "good student," I decide I don't have time to flesh it out at that moment. Instead, I bind it in leather and add it to my shelf.

Whenever I have free time, I'll pick a book off of the shelf and take a seat on my big leather couch. Maybe another time I'll pick a memory out of the stack and relive it. Every now and then I'll peer out the two stained glass windows at the front of the room, which keep the noise outside (that noise being whatever conversation I've checked out of) to a dull roar. This is my "headspace." And in my opinion, it is the most underrated place to hang out at Columbia.

There aren't many things that it pays to be on this campus more than being an extrovert. When you first arrive here, you'lll get a serious case of FOMO (fear of missing out) and you'll try your darndest to remedy it because, hello, how else are you going to be able to convince everyone back home that you are having the time of your life?

Extroversion comes in handy as a first year—especially when everyone's being the boldest, chattiest version of themselves and seeing where they do and do not fit in. But taking the time to stake out not only your own place in the Columbia community, but also a space for yourself in your own mind, can yield unexpected rewards when school gets back in session and all the chaos and stress catch up.

Studies have found that extroverts are understimulated by nature and need much higher doses of social interaction to feel good, whereas introverts are, by nature, overstimulated and have a very low threshold for gratification through social interaction. Think of it this way: Extroverts get their energy from living outside of themselves, among other people, doing things in groups, talking and sharing and creating with other people in the outside world. They don't spend very much time in their headspace because the walls are unpainted and there's not much furniture, and no one else is there. It's boring to them so they prefer to hang out outside of that space and it stays uninhabited for the most part—like a vacation home.

Introverts, however, hang out in their headspace a lot. They may feel drained after attending a party where they talked to lots of people, or if they've just been out in the city and bustle all day, or if there's just one too many people in the group conversation in the dining hall. Every time they go to their headspace, it becomes more and more lived in: They may add a painting to the wall (a new favorite they learned about in Art Hum) or lay down a rug. It's a second home, and that's where they go to recoup, check in, and spend some time with themselves when the outside world becomes too much to handle.

Everyone knows the feeling of being so comfortable with someone else that you can sit in silence with them and not feel the need to fill the air with conversation, but it's interesting to see how many people are incapable of doing the same thing with just themselves. This is what makes your headspace so necessary. It's a refuge from stress and overstimulation—a place for putting together and taking apart your thoughts. Getting used to hanging out in your own head (upside down in an armchair), and observing the outside world (from those stained glass windows that you could call eyes) can be a valuable safeguard against the outward loneliness we all eventually feel on this campus.

I know this all sounds hokey and nauseatingly abstract and like I've had too much time on my hands this summer, but just humor me, OK? Any time you find that you've checked out of a conversation, you've just stepped inside your headspace and maybe just didn't realize that that's where you were. Next time you find yourself in this place though — probably when your Lit Hum teacher is lecturing on the redeeming qualities of Augustine (spoiler: there are none) — take a second and have a look around and start to make it a place in which you'd like to spend more of your time. In between settling into your new clubs and putting the finishing touches on your dorm room, take time to figure out what your headspace looks like and hang out in it every once in a while as well, and maybe you'll find that your favorite place to be on campus is everywhere and nowhere all at the same time.