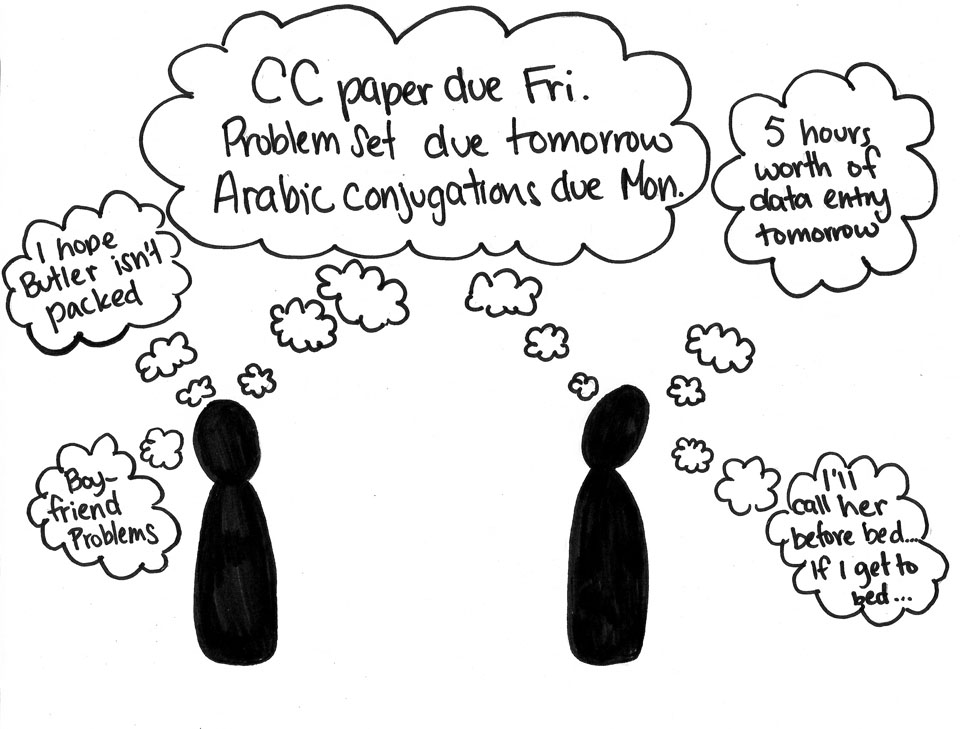 For some students, working while attending school is an "enriching experience" that gives purpose, teaches responsibility, and serves as an invaluable, and arguably low-intensity, introduction to adulthood. For other students (like me), the "invigorating" taste of adulthood was acquired long before it should have been. The novelty of "challenge" that comes with balancing work and study wore off on me long before I got to Columbia. Specifically, I've worked a job (sometimes two) consistently since my first year of high school. I've had to compromise my education in favor of a paycheck for long enough that the real novelty here would be the concept of needing to focus only on my studies.

Back home, splitting my time between work and school was an unavoidable necessity because there was no appeals process I could make to my mother's paycheck when my "demonstrated need" inevitably increased. However, Columbia, unlike my mom, has a spectacularly fat endowment of $8.2 billion as of 2013, which makes the elimination of work-study expectations for low-income students seem like a serious possibility. Or, in the case of the University of Chicago as of last week, a definite reality.

The University of Chicago announced a slew of changes to its financial aid policy through a new "No Barriers" initiative. Some of these revisions include "eliminating loans, waiving the application fee, and providing additional funding and support for low- and middle-income students."

Now you may be thinking, "But doesn't Columbia do all of that already?" And the answer is yes—it has for some time. I'm not going to pretend like I'm some kind of economics whiz because, frankly, I'm awful with numbers. But I can venture a guess that Columbia's endowment is in no way exhausting itself. As far as the "additional funding and support" goes, Columbia can certainly afford to do more by following in UChicago's footsteps and eliminating the work-study expectation for its low-income students. These low-income students could then focus their energies more sharply on the academic demands of Columbia.

I'm not saying I shouldn't have to work because I'm an entitled brat who's above those public school plebs. That's just wrong on so many levels, and I'm not above doing work where work needs to be done. But if low-income students (many of whom are familiar with the hard-earned dollar) can finally, or for once, not have to shoulder work responsibilities—especially in this considerably more demanding environment—why are we still expected to do so?

Most low-income, working students who have made it to Columbia have done so at a relative disadvantage to their fellow students who did not have that additional hurdle of work to jump. Why, then, should we be expected still to jump these hurdles while our nonworking classmates continue in their obstacle-free lane, maintaining the gap created even before we had the means to close it? Yes, the argument can be made that work is done in other ways, like internships, but even so, there is a fundamental difference to be noted in the nature of the work and the motivations behind it. There is a difference between choosing to work and needing to work.

Similarly, there is a difference between students pursuing internship work, which cultivates practical skills in their field of interest, and students being made to sit behind a desk to "earn" the money the school has set aside for them. A concession must be made for the fact that many work-study students don't mind their jobs and may even genuinely enjoy them. They should be allowed to work if they so choose—but that's the part that matters: having the choice to take on work-study, but also having the choice to focus solely on your studies without incurring financial repercussions.

Columbia's removal of the federal work-study expectation for low-income students would likely have a larger effect that would reach other colleges and universities. The dated formula used to determine how much money is allocated yearly to each school results in a disproportionate amount being given to "elite private universities or selective public flagships," whose student bodies are comprised of a comparatively small number of low-income students. In fact, according to National Journal, "at 11 of the 20 institutions that received the most federal money in 2012-2013, less than 25 percent of undergraduates received need-based federal Pell Grants."

This means that students from backgrounds similar to mine, who are not as lucky or fortunate to attend Columbia (and instead attend community colleges or large public institutions), see very little of this money, and, as a result, must often work additional (not to mention less flexible and student-friendly) jobs to make up for the meager work-study rewards they do receive. For them, some work-study is better than no work-study, where eliminating the student employment obligation of already disadvantaged low-income students is not a viable option. For Columbia, however, the choice is not the same.

If a school with as many resources as ours can afford to absorb the burden of student employment expectations on its low-income students (of whom there are relatively few), why shouldn't it–especially when other students in a less-privileged position, at schools not fortunate enough to have this option, can benefit from the change as well?