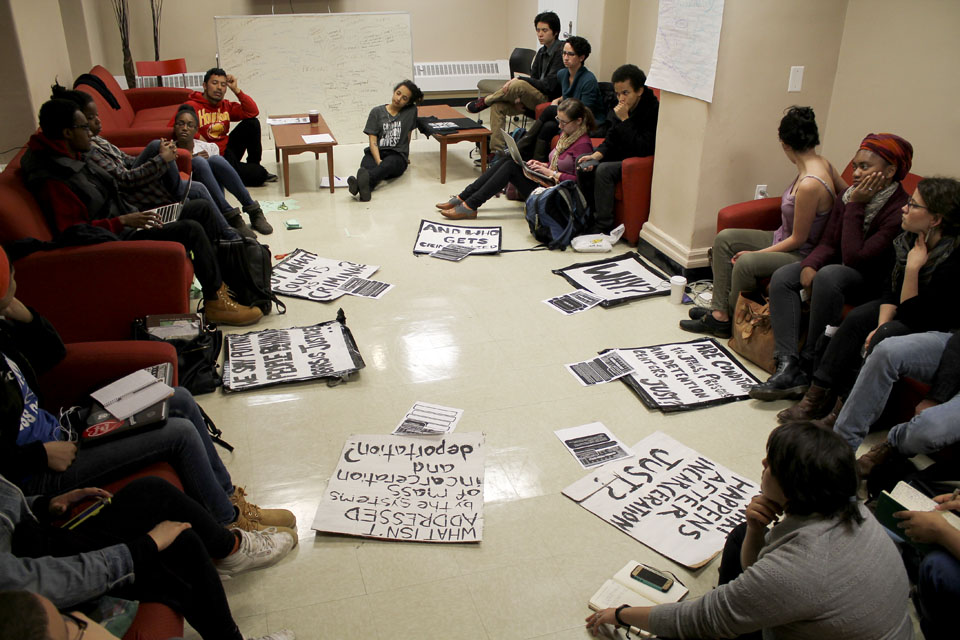 Despite sending multiple letters to University President Lee Bollinger and gathering more than 1,000 signatures on a petition, Columbia Prison Divest has been unable to secure a meeting with Bollinger.

When Columbia's financial investments in the private prison industry (worth over $10 million, according to data from December 2013) came to the attention of a group of students, we wrote an open letter to University President Lee Bollinger voicing how disturbed we were that our university was literally profiting off of people being locked up. Our letter, delivered on Feb. 3, 2014, called on Columbia to divest from the industry and requested that our president confirm a time for us to meet with him about the issue.

In the 261 days since we sent that letter, we have gathered over 1,200 signatures on our petition, hosted dozens of educational events for the Columbia community, and organized alongside countless students, faculty, and community members. We still have not met with President Bollinger.

Our initial meeting request was deferred to the University's Advisory Committee on Socially Responsible Investing. Despite serious delays, miscommunications, and egregious failures on the part of ACSRI, President Bollinger has repeatedly referred us to the ACSRI as Columbia's "diligent process" for dealing with divestment. That process is unresponsive and ineffective.

Since its conception, the ACSRI claims to have considered six requests for divestment.  They declined to recommend more than half of these requests, including the widely supported initiative to divest from fossil fuels, despite the fact that 73.7 percent  of students in Columbia College supported the ballot initiative. In this way, the committee has shown little regard for student concerns and has failed to uphold its commitment to promoting socially responsible investments. Furthermore, as a diversionary, bureaucratic process, the ACSRI has made it more difficult for students calling for ethical management of our university's investments to be heard.

Columbia Prison Divest has been meeting with representatives of the ACSRI since the launch of our campaign in February. We communicated with then-coordinator Ursula Bollini throughout the spring semester and delivered an extensively researched presentation to the entire committee on April 8. Over the summer, we scheduled and confirmed a second presentation to take place on Oct. 6. The ACSRI gave us a long list of questions and topics to research for this presentation, and asked us to plan an informative and public panel on prison divestment to take place at the end of October. Accordingly, we compiled this research and invited outside experts who would be available to speak about the private prison industry, mass incarceration, and the human rights violations that are committed every day in for-profit detention centers.

However, in the fall we found it very difficult to communicate with the ACSRI and were finally told on Sept. 29 that both Ursula Bollini and Committee Chair Jack McGourty had left, and that the process would be set back with no indication of how much of a delay there would be. We have since been informed that the ACSRI is still working on finding a new chair. Our scheduled presentation was pushed back to mid-November and our panel has been postponed with no proposed date. As of Oct. 1—a month after school had started—the committee had held exactly zero meetings, according to Gail Hoffman, the treasurer. There is currently no chair of the ACSRI, and therefore no process for us to engage with.

We feel that there is no accountability to students who are continuously told to stick with "the process." The ACSRI's criteria for divestment are summarized in three points: there must be broad consensus on the issue within the University community, the merits of the dispute must clearly lie on one side, and divestment must be more viable and appropriate than communication and engagement with company management. There is no doubt that private prison divestment meets these standards.

In our April presentation for the ACSRI, we explained the ways in which mass incarceration and private prison companies are neither humane nor cost-effective. Moreover, private prison companies have a fundamental interest in increasing incarceration in order to maximize profit, and this takes precedence over crime reduction, safety, and basic human rights. Recently, women incarcerated at a private detention facility in Texas filed a federal complaint against guards for sexual harassment and assault. Such accusations are appallingly common in for-profit detention centers, and we think that this is a direct violation of not only Columbia's liberal rhetoric but also of the ACSRI's own ethical guidelines.

The committee specifies on its website that it follows two basic definitions of human rights, both of which shape its understanding of social responsibility. One of these definitions is Article 5 of the United Nations Declaration of Human Rights, which states that "No one shall be subjected to torture or to cruel, inhuman or degrading treatment or punishment," which is precisely what many prisoners at such facilities are subjected to.

The ACSRI's miscommunications and ineptitude have demonstrated that it is not able to uphold the values and processes that it puts forward. Both the ACSRI and President Bollinger need to be accountable to students engaging with their recommended process, given the fundamental brutality of for-profit incarceration and the urgency of divestment.

This op-ed was authored by Columbia Prison Divest.