Being a better neighbor to Manhattanville

Being a better neighbor to Manhattanville 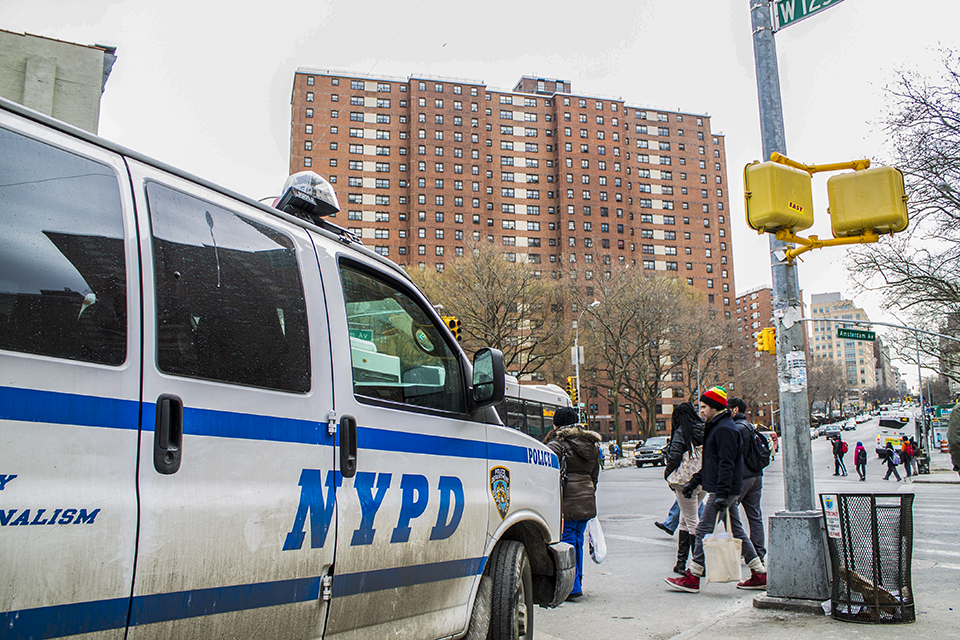 This summer police conducted one of the largest raids in NYC history. Over 100 residents of Manhattanville and Grant houses were arrested, largely for alleged involvement with gangs and gang-related crimes.

As first-years are finally getting acclimated to life at Columbia, their peers down the street face the possibility of spending the rest of their lives behind bars. One hundred and three young men and women from the Grant and Manhattanville houses have been charged with 145 counts of various crimes—including gang assault, conspiracy in the first degree, and second-degree murder— in the wake of the largest gang raid and arrest in New York City history.

Last Thursday, friends and families of the accused gathered in a courtroom downtown as 39 of their children were brought before the judge. They were joined by dozens of concerned community members and student activists. In an emotionally charged scene, defendants stood before the judge (out of confinement for the first time after more than five months at Rikers Island), and mothers saw their children in chains and out of reach.

At the hearing, family members, organizers, and activists called for justice for the young lives that hang in the balance. Members of Columbia's activist community turned out in solidarity, brandishing signs that read,"CU students stand with Grant" and "Raids don't keep us safe." Michelle Doles, a community member and mother of defendant Paul Washington, summarized her position with words that capture the perspective of people living in poor communities of color across this country: "The police aren't protecting us—they're trying to throw us away."

Whether or not we agree with Doles' statement, the criminal proceedings resulting from the Manhattanville raid fit within a larger context and conversation about Columbia's expansion into the West Harlem and Manhattanville neighborhoods. Our University's expansion is a complex and divisive issue that will be the subject of debate for years to come. As members of the same community with very different resources and opportunities, we must engage on this issue together.

We must not downplay the longstanding and violent feud between residents of the Grant and Manhattanville houses. It should go without saying that Columbia students and all members of our community have the right to the safety of their person and property. Violent criminals have no place in our greater community. But we must remind ourselves that these 103 are merely accused. We should be wary about coverage that portrays the accused as criminals before they have their day in court.

For years before June's gang raid, antiviolence community organizers beseeched politicians, nonprofits, and even Columbia administrators for resources to help keep kids off the streets with jobs, after-school programs, and recreation spaces. Sadly, local politicians, the New York City Housing Authority, and the Columbia administration ignored calls for help. Leaders in these communities were thus unsupported, and in the meantime, the NYPD and the Manhattan District Attorney's Office prepared the case that led to this summer's raid.

Immediately after the raid, Vice President for Public Safety James McShane announced in a University-wide email that Columbia is "actively supporting an enhanced police presence in West Harlem." Crime and violence exist in and around the University—indeed, sexual violence on our campus has received national media attention. But increased policing will impact non-affiliates more than Columbia affiliates. Columbia's expansion into Manhattanville as a whole has had a far more tangible effect on non-affiliates than affiliates. The Columbia community has ignored the circumstances of others living in our midst for too long.

In the wake of the raid, longtime residents and student activists have increased their collaboration. While they want justice for these incarcerated youths, they are also looking to the future to ensure that the next generation of children growing up in the Grant and Manhattanville houses does not face the same fate.

As their neighbors, we hold a stake in their future—now more than ever. Our greater community must work together to find peace.