The lion, the witch, and my wardrobe

The lion, the witch, and my wardrobe 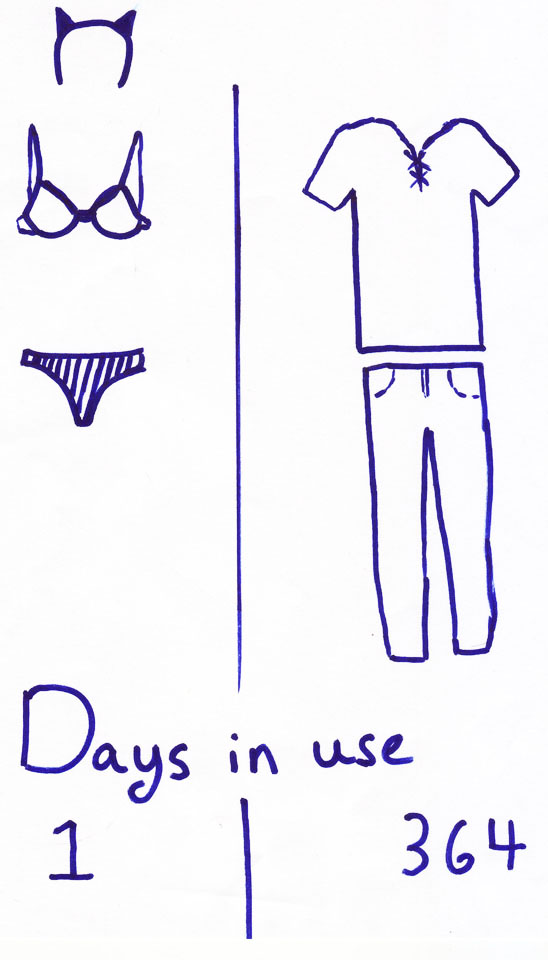 I was in the middle of an over-caffeinated editing spree last week when one of my friends burst into my room, forehead veins bulging, to inform me of the latest breaking news in her life: "My Tinder date invited me to a Halloween party in Williamsburg, and I have no idea what I want to dress up as."

This particular friend is no stranger to Tinder—she's had dates in ramen bars, coffee shops, and on one memorable occasion, a Bushwick rooftop. But all that experience flew out the window with the introduction of the game-changing Halloween component. We were stumped as to how she could pull off a last-minute costume that was equal parts clever, flirtatious, and Williamsburg-appropriate—but, like, in an ironic way.

We nixed Velma Dinkley and Cher Horowitz. The children's book character Madeline was axed almost immediately. She declared Daria Morgendorffer a no-go because the whole blazer-and-glasses social misfit look was too similar to her regular taste in clothing. But as our spreadsheet of Halloween costume ideas grew in length—with my essay still idling—I found my mind stubbornly drifting back to thoughts about my own style. If Cher was contrived and Daria was uninspired, then what kind of unflattering adjectives did my own wardrobe bring to mind?

A few days ago, I caught up with one of my friends from a Chinese immersion program I attended this past summer. We met up at a panini shop. She was gussied up in leather pumps and a tailored blazer for some finance event in Tribeca. I felt underdressed in my leggings and combat boots. "When I first saw you standing on the street corner," she told me, chomping away at a glob of melted mozzarella, "I could hardly recognize you. I was like, who's this hipster chick?"

I stared at her, mystified, holding my own greasy chicken pesto panini. Then I remembered that she had really only known me for those two weeks in Beijing, when my wardrobe consisted of sneakers and generic T-shirts. I'd never wear those clothes at Columbia. They were for the Sporty Spice version of me who traipsed around Beijing this summer.

As I considered it, I wondered how dissimilar I was from a dress-up doll. Was I Beijing Paulina or Barnard Paulina?

We all feel inclined to dress a certain way to fit our Columbia personas. This isn't to say that all Columbia students dress the same way or have the same style sensibilities—we obviously don't. For many Columbia students, college is an opportunity to experiment with clothing and present their uncensored selves without having to deal with the censorship of strict dress codes.

This campus has borne witness to deluges of dinner jackets and boatloads of boat shoes. Its washing machines have cycled through an overflowing surplus of sweatpants, each pair bearing a different logo and design.

At Columbia, I've attended more than one icebreaker that's asked me what my go-to outfit is. My answer is pretty simple: a button-down, black skirt, black tights, black boots. These are the clothes I find myself gravitating to now, during the fall semester of my sophomore year at Columbia. But if someone asked me the same question while I was studying in Beijing, I probably would have given them an outfit of shorts and a T-shirt.

The change isn't so much correlated with my sense of style as it is with my environment. New York City has inspired me to take far more sartorial risks than Phoenix ever did. But although both style and wardrobe are liable to change, they shouldn't be conflated. Identity is reflected in style, and the two are intertwined. Identity, like style, is multifaceted. Just because I've changed out of sneakers into black boots doesn't mean that my style or identity has been altered.

Halloween is an opportunity to step outside your comfort zone. Donning lingerie and animal ears might feel liberating to someone who spends the other 364 days of the year in denim jeans. Some people love sinking their teeth into fake vampire fangs and accessorizing themselves with fake blood. Still others enjoy investing money in elaborate Lord of the Rings elf ensembles (complete with pointed ears). Much like my hallmate, people focus so much on dressing unlike themselves on Halloween that they forget that their identity ultimately isn't defined by the clothes they choose to wear.

Our wardrobes change—sometimes hourly—with season and setting. Our style, on the other hand, is evolving right alongside our minds, personalities, and maturity levels. This evolution is a slow, complex process. It's impossible for me to "come as I'm not" to Halloween parties when what I am is so much more than a button-down, black skirt, black boots, and black tights.

My hallmate and I eventually succeeded in throwing out all of the ideas on our costume list but one. She'll be gracing the Halloween party of her latest Tinder conquest dressed up as Suzy Bishop from Moonrise Kingdom. Yesterday, I helped her with the blue eyeshadow for her costume.

"You know, it's funny," she told me. "I could totally see myself wearing this in real life."