If you go to Orgo Night, you're part of the problem

If you go to Orgo Night, you're part of the problem 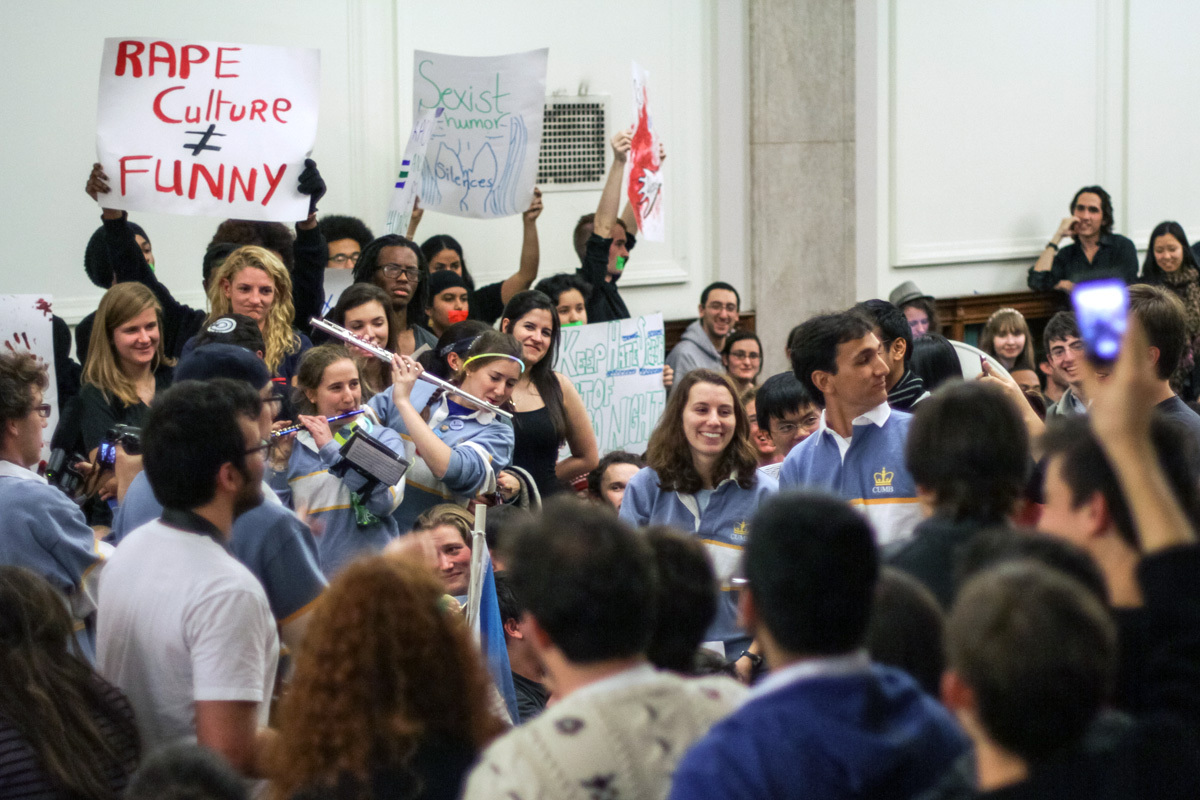 Earlier this semester, the Columbia University Marching Band published a series of recruitment posters. One of them transposed a photo of Nicki Minaj's album cover for Anaconda where she is crouched on the ground with her butt exposed in a thong. In its original form, the album cover is a statement about sex positivity and one woman's control over the depiction of her body.

As an advertisement for CUMB, the image became a gross representation of white supremacy. The poster featured the enlarged photo of Nicki Minaj with a frog photoshopped over her face, along with two white men in black shorts hitting her butt cheeks on each side with a gong mallet. In one image, CUMB managed to completely disregard the history of slavery and the history of black women not having control over their own bodies (most frequently at the hands of white slave masters). They also disregarded how black women would feel seeing this image around campus, as CUMB essentially told them (just like American history has told them) that their bodies are not theirs.

This is just one example in a history of racist and sexist posters. Last spring, they distributed a poster making light of the Malaysia Airlines tragedy, using a picture of an airplane with the caption "FLY LIKE PAPER, GET LOST LIKE PLANES." The punch line here is literally national tragedy and the deaths of hundreds of Malaysians. For students of color, this poster, like countless before it, was an awful reminder that this campus is not for us.

Every semester after Orgo Night, some students leave Butler feeling miserable and triggered and have to turn to one another for consolation while our peers celebrate. Those who protested Orgo Night in 2012 by putting tape over their mouths were met with hostility and left feeling even more traumatized, even more hopeless that the community would understand them. This happens year after year, and yet nothing changes. The marching band's posters and "jokes" continue their violence, and the administration stays silent.

Columbia's administration has failed students of color, time and time again. When black and brown students held a peaceful die-in at the Tree Lighting Ceremony last Thursday, half a dozen NYPD vans lined up on Broadway within the 15 minutes that we were on the ground. Columbia neither supported us through nor apologized for the NYPD's unnecessary presence. The protest called attention to the recent decisions to not indict Darren Wilson and Daniel Pantaleo for the murders of Michael Brown and Eric Garner, but the protest also confirmed just how Columbia views its students of color. A large group of black and brown students congregated, and the NYPD turns up almost immediately. Nevermind that we were there peacefully protesting for justice—we were dangerous.

Yet, in the same vein, administrators simply asked CUMB members to consider canceling Orgo Night after students were adamant about it at an open forum the day before. Was it news to them that Orgo Night is alienating for some students? CUMB hosts this event every semester, and every semester students protest it. Yet their hate speech is sanctioned while students of color and their speech are literally policed. Administrators should not have asked CUMB to cancel Orgo Night. They should have canceled it outright. Our safety is not up for negotiation.

We asked administrators to listen to us, to acknowledge us, and to protect us. Their failure to do so is proof of what most students in attendance at the open forum already knew—that the administration does not care about its students of color, its queer students, or its trans students.

People of color, queer people, and trans people know better than anyone that comedy can be unifying and even liberating. We laugh at ourselves as a coping mechanism. We laugh at our oppressors because sometimes it's all we can do. It's not funny for white people, straight people, and cis people to laugh at us while still benefitting from their privilege, while they continue to ignore our pain, and without being our allies. These "jokes" allow them to position themselves yet again in positions of power over people who are forced to constantly doubt our presence and our value on this campus, in this city, and in this country. Equal opportunity comedy is bullshit. Just because the marching band makes fun of everyone does not excuse their racism, sexism, violence against queer people, or their violence against trans people.

A predominantly white group and a predominantly white administration cannot be the ones to determine what is acceptable, and what spaces are safe for students of color, queer students, or trans students. This is a campus where yellowface is a regular occurrence, where sororities caricature Mexican culture for fun, where the NYPD shows up when black students gather.

Many people have come to Orgo Night's defense, claiming that it is a Columbia tradition that unifies the student body. But who is it a tradition for? Who does it unify? The unification of predominantly white students who think it's okay to laugh at the trauma we feel on a daily basis is literally the creation of an unsafe space.

This criticism extends to more than just whoever writes the marching band's jokes, or to whoever reads them out. Those of you who attend, have a few laughs, feel a little uncomfortable about a rape joke—you are part of the problem. Attending, enjoying, and celebrating Orgo Night perpetuates the alienation and marginalization of students of color. Your participation is violence, and your laughter complacency.

Note: Editorial Page Editor Mikhail Klimentov, CC '16, recused himself from the editing of this piece because of his involvement in the Columbia University Marching Band.