The most commonly ignored rule at Columbia

The most commonly ignored rule at Columbia 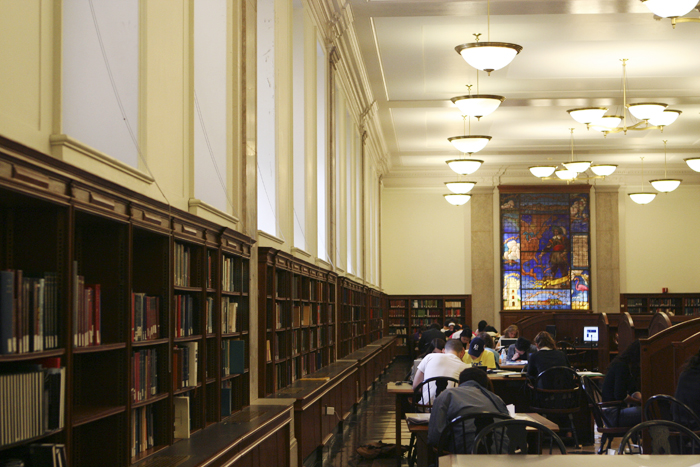 Let me ask you an uncomfortable question: Do you get irritated by the smallest sounds? If so, take comfort. You are not alone in this world. High sensitivity to sound is a disorder known as misophonia, literally "hatred of sound," and it is one I am acutely aware of every time I enter Butler Library.

A library, you ask? Why would a library, of all places, be full of irritating sounds? Those of us who have but once taken off our headphones in Butler know the answer to this bizarre question: Our library is pretty loud. Within its mandated but unenforced silence, there is a secret world of student struggles that you hardly imagined could exist.

Many things happen in Butler Library. Momentous conversations mark the start, end, and climax of student relationships. By as much as a whisper, you learn how many of your peers have finished their papers before you. A sigh can tell you whose deadlines have been met, missed, or rescheduled. Whether we like it or not, many of us spend a great part of our lives in this overcrowded Acropolis where misophoniacs, like scribes, are doomed to keep track of the tales.

In a strange way, Butler reminds me of communal apartments in the Soviet Union, in which multiple families would share a kitchen and bathroom. The communal apartment, according to Russian émigré writer Joseph Brodsky, "strips off any illusions about human nature. By the volume of the fart, you can tell who occupies the toilet, you know what he/she had for supper as well as for breakfast." By analogy, there are quintessentially Butler-esque sounds—such as sighs, whispered complaints, and mastication. They, too, communicate embarrassing things about our student lives.

I pause at the last one. Butler has a lounge and "green" spaces where one is allowed eat. But apparently they do not seat enough, a fact that becomes painfully obvious during exam week when the building is filled to capacity, and Blue Java pound cake and three cups of extra-large café au lait turn every other table into a picnic. Distracted by the chewing, you start reading into people's eating habits, social class, and other facets of their lives, instead of the material you set out to conquer.

Once, during finals week, I overheard my desk mate's sigh of unprecedented concentration. I tolerated it at first, but when his friends came and started a jolly conversation to relieve the stress, I finally mustered the courage to confront them. In exchange, I got a sincere apology and… a brownie. The sugar could not dilute the bitterness of irony. What I really wanted was respect for library rules, and now I was invited to join in their breaking? Thanks for the thought, but no thanks.

When I am unable to concentrate on my work, I desperately ponder alternatives (Avery? Lehman? NoCo?) My single in John Jay is generally a good place to study but parties on my floor can change that. I am already a somewhat regular apparition in the lounge, a pajama-clad spectre kindly asking the residents to tune down their 1 a.m. merriment. And they listen, for which I am grateful.

But having said all this, I inevitably return to Butler. Why? For, just as with the residents of my floor, I believe we are a compassionate community that can overcome the temptation to break rules. Butler need not have a "headphone" tradition-turned-prerequisite. We can create privacy within our treasured and legendary public space. Not to sound like CCSC, but I believe that we can make Butler the desired study space of every student… even the occasional misophoniac.

But all of this is simply to say, let's not talk or eat in the library when we're not supposed to. If not for others, then for our own privacy's sake.

The author is a Columbia College first-year student. She is a member of the Residence Hall Leadership Organization.