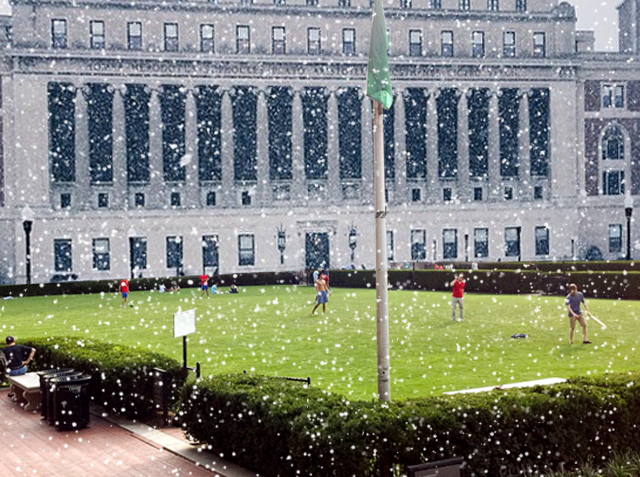 Though New Yorkers were arguably spared the worst of the Nor'easter that hit the city on Jan. 26, the weather saga continues. All of last week, temperatures fluctuated wildly, from an outright balmy 40-degree high to a snowstorm for which a weather advisory cautioned against travel on account of heavy snowfall and icy road conditions.

These instances are part of a larger-scale pattern of extreme weather—and yet Governor Andrew Cuomo, along with other politicians, refuses to acknowledge the role of global warming. In a press statement on Monday, Jan. 26, he commented vaguely, "there is a pattern of extreme weather that we've never seen before." In this statement, Cuomo recognizes that things are different, but fails to cite global warming as a direct cause, a stance consistent with his comments in the wake of severe storms in November: "I don't want to get into a political debate at this time about climate change causes, et cetera. Forget the causes. Is it global warming? Is it reliance on fossil fuels? Forget the causes. What is inarguable is the result."

Can we afford to abstain from the global warming "debate" in the wake of recent events? Extreme weather affects many severely, and some provisions such as New York's well-publicized Code Blue Procedure, which calls for increased street outreach efforts during inclement weather, are effective at extending resources. Although such efforts are well-meaning, seldom are they effective on the kind of long-term basis required of global warming-fueled climate change. Increasing trends toward meteorological and hydrological extremes demand both consideration of our undeniable role in climate change and more nuanced thinking about how the city will manage the risks and adapt to change.

For instance, Kevin Trenberth, a senior scientist in the climate analysis section at the National Center for Atmospheric Research, has stated that the amount of water vapor in the atmosphere is approximately 10 percent higher than normal, and about half of this can be attributed to climate change. When cold land air collides with warmer offshore air, the result is a perfect condition for heavy storms. How will the city cope with more snow, and on a more consistent basis than ever before? Will we continue our slipshod practices of importing our snow-melting salt from Chile? Will provisions be made to clean the snow, or will it simply be allowed to accumulate detritus? And finally, at what threshold will New York finally adopt policies that serve as a check on our role in accelerating climate change?

The New York State Energy Plan, which aims to create a blueprint for uniting the public and private sectors to create a clean energy economy, has been under revision since early 2014. Thus far, no changes have been made to the stipulations for building weatherization have been made. The Community Risk and Resiliency Act requires applicants to State programs to demonstrate that they have taken into account "future physical climate risks," but specific action items are left unnamed. And although there have been notable improvements in the array of heat and power technologies at our disposal, few are endorsed by the NY State Policy, and none are legally required.

It is crucial that we consider the implications of global warming—which are nothing short of massive—when determining city planning. The important question is when will our politicians, in concrete terms or policies, meet this challenge.

The author is a Columbia College sophomore majoring in History.