Club sports and the tyranny of impending prostate exams

Club sports and the tyranny of impending prostate exams 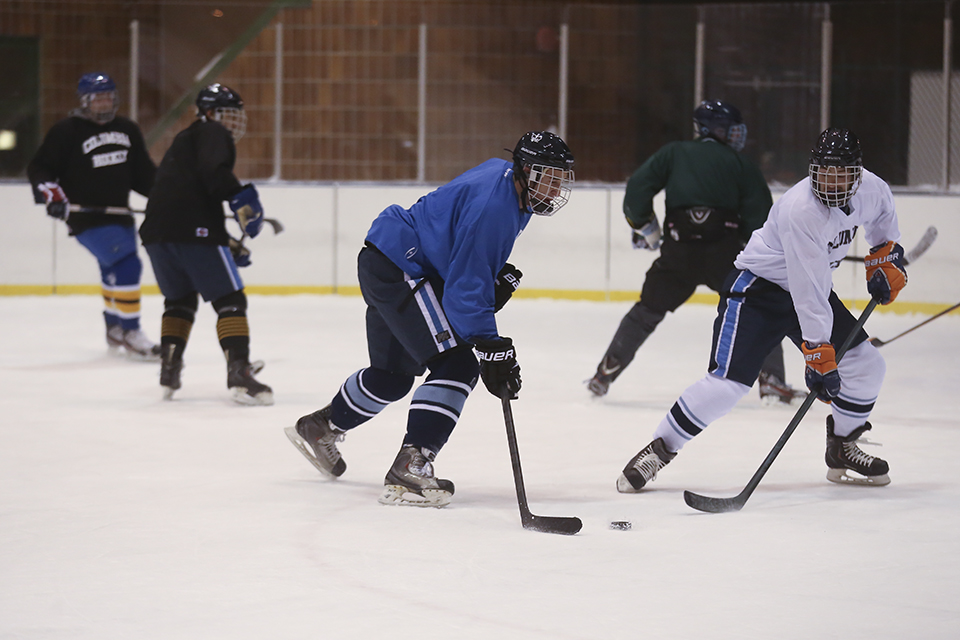 NEWARK, N.J.—Columbia University Club Hockey, also known as CUCH, pronounced "cooch" by the initiated, drowned the third-place Stevens Institute of Technology Ducks 6-5 at the AmeriHealth Pavilion on a Danny Caccs shot from the low dot, 16 seconds into the five-minute overtime period. As soon as the puck hit the back of the net, the CUCH boys hopped the bench, tossed their gloves, sticks, and buckets into the air, and mobbed their teammate, leading scorer, and assistant captain. The team's playoff dream had life.

Caccs still sports a snapback from his first hockey team, the 1996-97 Vaughan Rangers Mini Mites. When we are beating up on our opponents at the Ice Hutch (an inflated bubble that houses an ice rink, tucked into a corner of the city that only hockey players know intimately), Caccs lobbies the coaches to skip the ice resurfacing between the first and second periods so that we can all hit the bars a little bit earlier. Games don't start until 10 p.m., so the trade-off between hockey and campus life is real. Late-night ice slots are cheaper, and at best our attendance consists of a couple of friends, plus an assortment of cardboard cutouts of mid-2000s sports stars, like Hideki Matsui, stuck to the walls behind the net.

Caccs is one of the handsiest forwards I ever played with in my now 15-year hockey odyssey. And so, before he scored the game winner against Stevens, he gave the puck one extra stick handle, contemplating his release for a split second before letting go of that little black rubber dream called hockey that we have all been chasing since our parents first propped us up on skates so many years ago.

What does it mean for a club hockey player to dream? Not so long ago, the CUCH boys were a bunch of starry-eyed kids shooting pucks in the backyard, pretending to score game winners to win Lord Stanley's Cup. But now we play club sports. The national anthem and player introductions at our games are more ironic than illustrious. For all of us club players, boyhood dreams of making it to "the show" skated headlong into reality somewhere between puberty and our junior years of high school.

That's not to say that some of us aren't actually good. Heck, Caccs, Benji, and a few other guys on the team put up some cartoonish stats this season. I like to think that they could have played somewhere. But maybe that's just because, deep down, I'm still a kid shooting pucks in the backyard, wishing that I could have "played somewhere."

At the beginning of the season, we traveled to a "somewhere" in the hockey world—Brown University—to compete in the Ivy League Club Hockey Championship. Though we finished third, we were the only team to defeat Harvard, whose players showed up wearing tracksuits that went "swish-swish," immediately healthy-scratched their weaker players, and (hilariously) unveiled a self-purchased tournament trophy because, well, Harvard.

Despite a promising start to the season, we skidded into Metropolitan Collegiate Hockey Conference play on a four-game losing streak. Although CUCH finished the last nine games of our season with an 8-1 record, which included defeating all five opponents after the Christmas break by a combined score of 42-16, our fate was already out of our hands. We needed Kings Point, one of the bottom-feeders in our league, to pull out a minor miracle against County College of Morris, or no playoff berth for us. An email received at 8:33 p.m. laid the dream to rest: 5-1, CCM.

The dream of club sports has nothing to do with delusions of a hockey career after CUCH. No, the dream in club sports is not quite so boyish, and it's much more familiar to the average Columbian who wonders why anyone would ever sacrifice their Friday nights to play in front of Hideki and the cardboard cutout gang.

We don’t want to let go just yet.

We want to hold onto that puck just one stick handle longer, produce just one more episode of the fake talk show turned van tradition called “CUCH After Dark,” and put off the inevitability of graduation, career, marriage, mortgage, fatherhood, prostate exam, retirement, funeral. Life only speeds up after you hang up the skates. Before you know it, you are a college senior holding onto that little disk of vulcanized rubber called memory, knowing that you have to let it go. Just one more stick handle. Just one more shot. Just one more goal. We jumped the boards, celebrated one last time with our teammates, and life went on.

Julian NoiseCat is a Columbia College senior majoring in history. He is the president and captain of the Columbia University Club Hockey team.