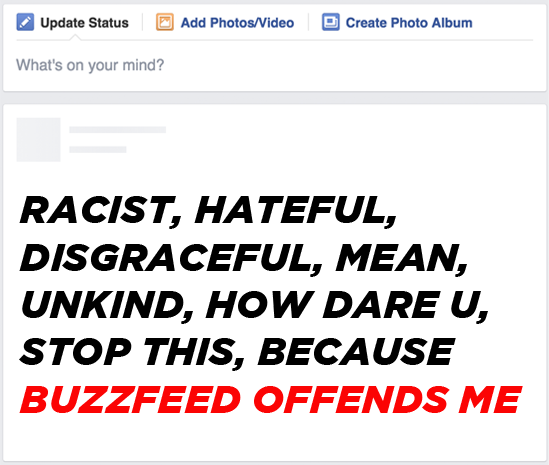 This is for the high school English teacher who pulled me out into the hallway to ask me if I plagiarized a paper that had received an A.

This is for the countless people over the years who have told me, at times when I was angry or upset for one reason or another, that I was "acting so black right now."

This is for the white guy who told me "I know you're educated––you graduated from my high school."

This is for the girl who told me the n-word was fun to say and that I shouldn't be so offended when she affixed it to the beginning of my given name.

I was recently informed that my decision to share a Buzzfeed article, which photoshopped an unamused Kanye West into pictures of white people making poor decisions, was an exhibition of racism, and that, furthermore, as a graduate of a predominantly white high school, I should know better. This spiraled into a heated debate on my Facebook wall, in which I was told that the article was the most racist thing ever seen and that, in being racist against my oppressors, I lost my fight against oppression.

As I thought about my complicitly in pandemic oppression in today's culture, I began to wonder: Can racism be minimized to a simple question of intent and effect? The Buzzfeed post in question was written by two white males—both staff writers—so I think it's fair to infer that it was not their intent to be racist toward white people. But, as it was made more than apparent to me, the identities and intent of the authors do not change the fact that the article's content was offensive.

I understand that it's not really correct to extrapolate the featured idiotic behavior (such as marrying a horse or cooking Ramen noodles in a bathtub) to an entire race of people. But I wish that, like those who found the post offensive, I could get to a point in my life at which a Buzzfeed article is the most uncomfortable part of my day. I wish this were a world where, as a person of color, I could conjure and choose my battles against oppression at will. Instead, this is a world where the only author of color on my Contemporary Civilization syllabus was the first to be cut at the beginning of the semester. After two years of the Core Curriculum, I have yet to read a work written by a someone considered an outlier. But never mind that. Recent events have established the fact that a white man can kill a person of color with impunity, but please, tell me more about how an article on Buzzfeed hurt your feelings.

Long before our generation was born, the concepts of good and bad were assigned the labels of "white" and "other." I ask: Is it possible to oppress and offend the same people who modern society favors? Recently, the "other" has become fetishized and envied by typically oppressive groups, transforming marginalization into a trend that everyone wants to be a part of. Rather than owning privilege where it is blatantly present, oppressors have taken to shrinking from responsibility for their own words and actions by searching for reasons to be offended. Thus, Buzzfeed articles are seen as vitriolic propaganda, all the while serving as a distraction from the main problem: that governing what can and cannot be said about white people is an exertion of the privilege that some are so eager to forget. By arguing that something is racist because it is out of line, one acknowledges the fact that there is a line of order in place.

The simple, glaring difference between racism toward people of color and racism toward white people is this: The former is accepted as normal and the latter is not. To say something that offends white people is an egregious error, but that the marginalization of any other group of people is omnipresent in newspaper headlines, TV and movies, magazines, and other media—no one bats an eye. Black protesters are thugs; white protesters are lauded as proud sports fans. A key facet of the definition of racism is that it has become second nature to dismiss marginalized people by labeling them as abnormal, uncultured, or inappropriate. However, the slightest hint of ill will toward white people, be it a Buzzfeed article or the lack of a white history month, is sufficient grounds for uproar.

I want to be clear that I do believe there are people who are prejudiced against white people. I am also not denying the existence of closed-minded people that blame all past and present white people for their problems. I am not one of them. The distinction between prejudice and racism is important because racism is an institution that is inherently tied to our politics, media, and culture, while an individual's prejudice really does not have enough power to catch on or to victimize large groups of people. Because racism is a result of the system that white people have founded, they cannot be victims of racism—though, I still can't figure out why they would ever want to be.

Vivi Hyacinthe is a Columbia College sophomore majoring in English and a devout follower of the church of Yeezus Christ. Her column, Marginalia, runs alternate Wednesdays.

To respond to this column, or to submit an op-ed, contact opinion@columbiaspectator.com