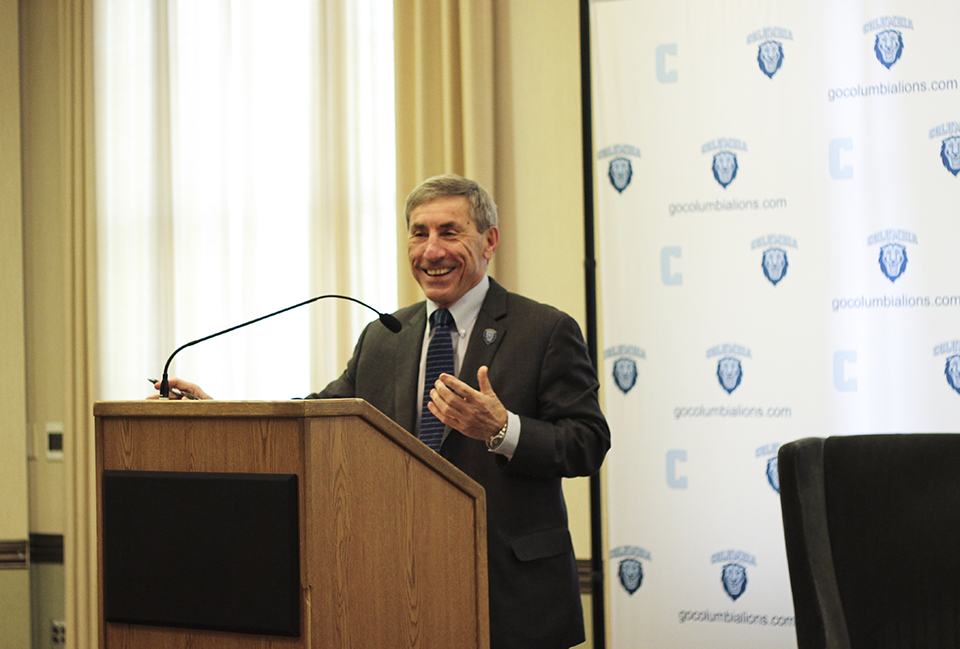 It's hard to imagine Al Bagnoli in Columbia blue.

After all, for the last 23 years, Columbia and the Bagnoli-led Penn have been polar opposites. Everything that Columbia football hasn't been since the early 1960s is exactly what Bagnoli has always been. If Columbia hopes to keep its fledgling program afloat, let alone make it anything other than a large embarrassment to the Ivy League, Bagnoli is just the guy to take over.

In his time as head coach, Bagnoli symbolized Penn football's overwhelming success. Nine Ivy League championships. 146 wins—21 of them against Columbia. While the last 14 games of his Penn tenure went decidedly wrong, the Quakers' longtime coach was everything for which Penn Athletics could have asked.

Meanwhile, Columbia, as you know all too well, has been the nail to Penn and Bagnoli's hammer. A plethora of losses. Consistent off-field distractions (hello racist and homophobic tweets!). Accusations of player abuse. All within the short three-year tenure of former head coach Pete Mangurian. It's not as if it was much better before Mangurian. The Lions happen to have held  the second longest losing streak in Division I football history during the 1980s.

In 1991, Bagnoli brought his Division III Union squad to Penn for a preseason scrimmage and proceeded to wipe the floor with the Red and Blue, making a lasting impression on the Quakers' brass. Essentially the same thing has happened with Bagnoli and Columbia, although it has been the last 18 years of regular season victories by Penn that captured the Lions' attention.

Winning. That is what defines Bagnoli. He may not have the same exact fire he had as a graduate assistant at Albany in the 1970s, but he still knows how to win. No matter where he goes, no matter what players or coaches are alongside him, he finds a way.

It isn't any one coaching philosophy that does it. Bagnoli's teams have ranged from offensive juggernauts to shutdown defenses to everything in between. Any person who stays in the same job for more than 30 years needs to learn how to adapt, and adapt he has, winning all the while.

Beyond that, Bagnoli has been a man of character. He may not have been loved by every player that came through Union and Penn, but all the players he worked with had great respect for him. Off the field, Bagnoli guided his team through two tragedies: the suicides of Kyle Ambrogi and Owen Thomas in 2005 and 2010, respectively. After those two events, it was the then-Penn coach that kept everything together while making sure each of his players had the support they needed. It was this ability to personally connect with players that further separates Bagnoli's program from Columbia under Mangurian. Almost immediately, Columbia football will be a much better atmosphere thanks to the addition of the longtime Penn coach.

"My first goal is to make football fun again," Bagnoli told the crowd of players at his introductory press conference on Tuesday. "You'll hear me say this all the time, but practice has to be the best two hours of your day.

"At Penn, the players called it 'adult recess' or 'adult play time.' I want that to be the case here, too."

However, while football will finally be fun again at Columbia, don't expect the wins to be plentiful, at least at first. The program isn't going to be remade into a winner overnight just because of the presence of a good coach.

Heck, even Bagnoli's last couple squads at Penn fell flat despite a strong set of coaches in charge. Ultimately, it will come down to the players, both the ones who are wearing Light Blue now and the ones Bagnoli and his coaching staff are beginning to recruit.

Watching the press conference on Tuesday, you could see the fire returning to Bagnoli. The man who at times was worn down by the attention of his final season is beginning to regain his edge. That edge, that fire, that indefinable quality that sportswriters always describe in top-flight coaches is what the 62-year-old coach needs to recruit players to what is currently a broken program.

For the next few years, it will be Bagnoli's job to mold Columbia into what he has previously molded Union and Penn: an atmosphere where winning is learned and subsequently expected. Only when that atmosphere has been created will Bagnoli truly fit in Columbia blue.

Steven Tydings is a junior in the Wharton School at the University of Pennsylvania. He is the social media director and a senior staff writer for the Daily Pennsylvanian.