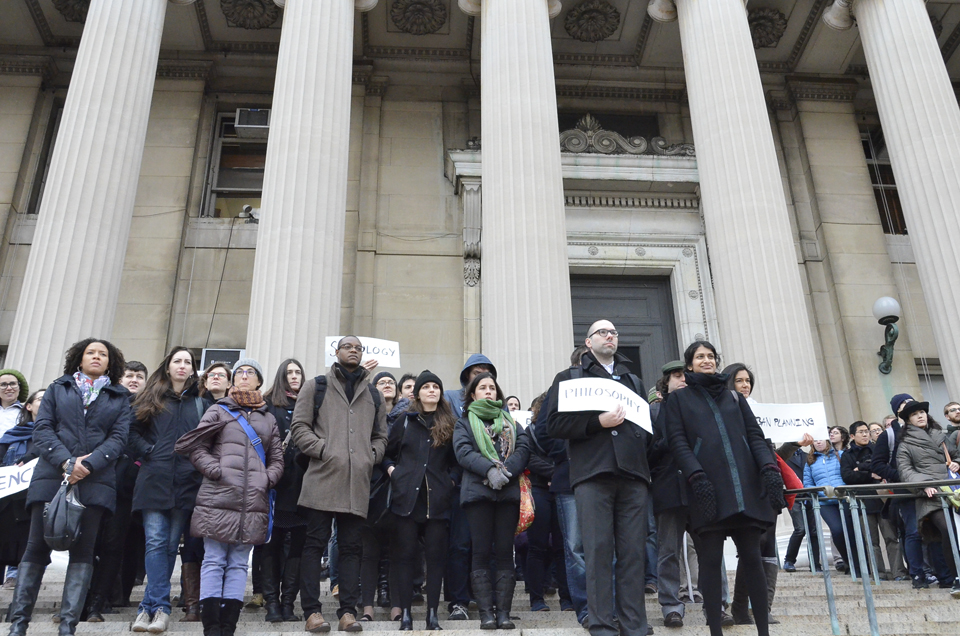 Graduate Workers of Columbia University, the union representing graduate workers at Columbia, is currently in the process of petitioning the National Labor Relations Board to recognize graduate workers' right to collective bargaining. However, even without having gained recognition, the mere fact that our union is organized and represents a large majority of graduate workers across the many schools and departments on campus means that we already have power. We are starting to see that power manifest itself in a number of ways.

As a graduate worker committed to the unionization campaign and as my department's representative to the Graduate Student Advisory Council, I have been able to see how unionization is already affecting graduate quality of life. Since the current campaign began, the Graduate School of Arts and Sciences has doubled the childcare subsidy. The administration is in the process of increasing parental leave from eight to 12 weeks. Dean Carlos J.  Alonso has passed the word on to GSAS departments that stipends will be raised this year.

Given Columbia's history of anti-union campaigns, these changes should come as no surprise. As graduate organizing started to gain momentum during the previous campaign for unionization at Columbia in the early 2000s, we saw the administration suddenly agree to set minimum stipends for the first time ever. In 2002, just weeks before the union election, the administration suddenly announced an increase in minimum stipends. Before the last campaign began, graduate workers paid the full cost of health care for dependents. Then, as the union gained more and more grad student support, the administration began covering 50 percent of dependent costs.

Of course, GSAC has been attempting for years to persuade the administration to address the serious problems so many of us face, from late paychecks, to unmanageable rent, to a lack of adequate health care coverage. I have been attending GSAC meetings throughout most of my time at Columbia, and from day one I have heard longtime GSAC members describe their experiences of powerlessness, of being bounced from administrator to administrator, or being outright ignored as they sought basic improvements to graduate student life. But ever since the union became a visible presence on campus, we've seen the administration suddenly start to have time for graduate students. We've seen them start to give in to a few of our requests.

There are two forces behind the improvements that we are currently witnessing. Despite administrative opacity, GSAC—which counts many strong union supporters among its members—has been working steadily to make graduate students' lives better. This has been especially noticeable in the improvements that the GSAC Quality of Life Committee, in partnership with union members from outside of GSAC, has made to parental benefits. Their efforts exemplify what can be achieved if graduate workers both within and outside of recognized student organizations commit to working together. However, if the last unionization campaign is any indication, we may soon see challenges to this partnership.

We can expect to see the administration push union supporters to divert their attention from unionization and toward GSAC alone. We can expect to see the establishment of "alternative" structures—student governments, for example—for liaising between administration and graduate students. And we can expect that, in all of these cases, we'll be asked to throw our lot in with organizations that are permitted to advise and propose, but which lack the power to ensure that their demands are met.

I urge all of us to be ready for such anti-union activity and to be ready to explain the changes that we see to our colleagues in the context of this longer history and larger administrative strategy. I urge all current and future student groups to continue working to achieve change together. We must insist upon maintaining our productive interorganizational relationships if we want to continue to be able to improve graduate life at Columbia.

Additionally, I urge us to recognize that the changes we are seeing, while welcome, are not enough. It does not replace the real voice and security we would gain through collective bargaining. $2,000 in child-care subsidy represent about 20 days at best in New York. We still don't have real dental care. Even the highest graduate workers' salaries are fairly low. On top of all this, the recent changes focus on the Graduate School of Arts and Sciences. GWC seeks a more secure, sustainable quality of life for graduate workers not only in GSAS, but also in the School of International and Public Affairs, Columbia University Medical Center, the Graduate School of Architecture, Planning and Preservation, the School of Social Work, the School of the Arts, the Journalism School,  Columbia Business School, and Teachers College.

The more we continue to commit to reaching across institutional divides, whether among student organizations, departments, or schools, the more power we will have to continue making a material difference for the better in our own and our colleagues' lives.

The author is a third-year Ph.D. student in the department of English and Comparative literature. She serves as her department's Graduate Student Advisory Council representative.