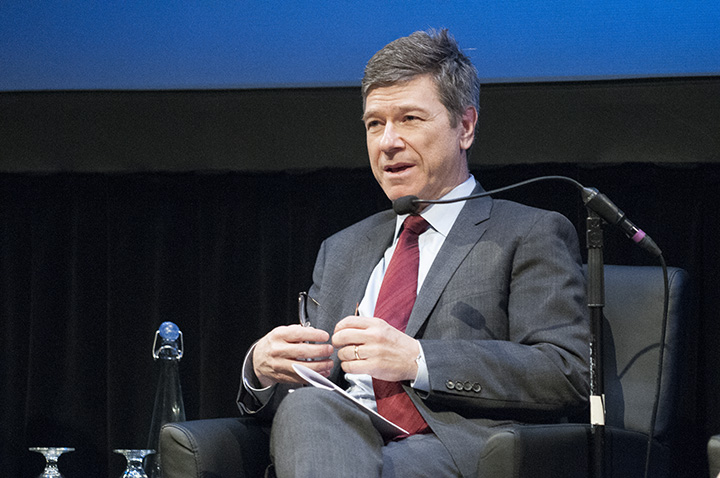 Jeffrey Sachs, director of Columbia's Earth Institute, along with other members of the Institute, chose not to sign an open letter to University President Lee Bollinger calling for divestment.

In the Spectator article "Some Earth Institute faculty members decline to sign divestment letter sent to Bollinger," Steven Cohen, the Earth Institute's executive director, is quoted, contending that to "worry about institutional divestment" is "vaguely hypocritical" because "everybody here uses fossil fuels—our homes, our cars, our entire civilization is based on it."

There is no hypocrisy, vague or otherwise, in noting that our systems of production and transportation have, with no small help from vast taxpayer subsidies and corporate-funded propaganda, made fossil fuels virtually mandatory in everyday life. This process has been, in no small part, a product of state-subsidized investments, which unload the costs onto the public; and campaigns of deceit to cast doubt on climate-change reality—on the part of private corporations as well as oil-soaked nation-state autocracies like Saudi Arabia and Russia.

These institutions have led the world into economic growth that rests on internal combustion engines and greenhouse gas emissions. All the while, as journalist Mark Schapiro has written, "The world's 3,000 biggest companies, according to a U.N. Environment Program report, cause $2.15 trillion in annual environmental costs, most of which are not accounted for in their profit/loss statements." It's a great deal for the companies.

The serious question is how to resist business models whose success depends on rendering our civilization unsustainable. These corporations continue to acquire hundreds of billions of dollars' worth of oil, gas, and coal reserves, even as rising sea levels eat away at Pacific Island nations and threaten countries such as Bangladesh, where by 2050 (within the lifetimes of almost all our students) they are likely to flood one-sixth of the land and displace about 18 million people.

"How do we replace fossil fuels with renewable energy?" professor Cohen asks. Obviously it will be no easy matter, but neither was it an easy matter to expose tobacco as a lethal addiction or to undermine apartheid in South Africa. In both cases, stigmatizing the corporations that encouraged and profited from a devastating course of action by divesting from their stock was an essential step—not a be-all-and-end-all, but immensely valuable.

Such a step has been taken by the world's richest sovereign wealth fund, Norway's Government Pension Fund Global, worth $850 billion, which last year sold shares of dozens of coal mining companies, tar sands producers, cement makers and gold miners because of the environmental damage they cause. Moreover, Bank of England Governor Mark Carney has repeatedly warned that "the vast majority of [carbon-based] reserves are unburnable" if global temperatures are to be kept from rising an unbearable 2 degrees Celsius over pre-industrial levels. Most of their assets may prove "stranded"—unusable. All the more reason why fossil fuel companies could well be, on strictly financial grounds, bad investments.

As one of the faculty circulating an Open Letter to President Bollinger and the trustees—a letter already signed by more than 200 faculty and staff—I am glad that professor Jeffrey Sachs, the director of the Earth Institute, agrees that divestment from fossil fuel holdings is "one possible option that needs to be considered." In his own recent op-ed, written with Lisa Sachs, he said something stronger: that "divestment by leading investors sends a powerful message to the world that climate change is far too dangerous to accept further delays in the transition to a low-carbon future. Divestment is not the only way to send such a message, but it is a potentially powerful one."

In their op-ed, they prefer an "ethically responsible and practical alternative to divestment," namely for institutional investors like universities to become "active, engaged shareholders to help persuade companies to adopt climate-safe policies." They advocate, among other things, pushing the companies to "pledge to leave business groups that lobby against effective climate policies," to "end any exploration and development of unconventional reserves," and to "demonstrate" that their investments remain "good" investments.

Of course Big Oil companies will say that their shares are "good" investments. Of course they say they do "good" for the world. They have consistently done so during years of funding climate-change denial and fattening on unacknowledged subsidies. Despite some hoopla in the last decade, they have mainly discontinued their own short-lived renewable energy projects. Why would it be anything but naive to trust their PR departments now?

"I think that if I were a long-term investor," professor Cohen said, "I would stay away from something like fossil fuels because ultimately I think someone is going to come up with a cheaper substitute for it." But the University is precisely a long-term investor. It must not chase the returns of the moment. It has a moral and intellectual stake in resisting a corporate business model that blithely ignores the research and teaching to which Columbia, as an institution of higher learning, is devoted.

Of course, as professor Cohen says, divestment is "a symbolic issue," but in the real world of institutions and politics, symbols count. When a powerful ignoramus like Oklahoma's James Inhofe, chairman of the Senate Environment and Public Works Committee, tosses a snowball in the Senate Chamber to make the ridiculous point that the coldness of this winter refutes global warming, he knows symbols matter. But also, more constructively, when Stanford divests from coal company stocks, the news resonates. Resonance is the lifeblood of politics.

Symbols count. Stigmas count. When corporations are massively irresponsible, and politics stalls in an attempt to counterbalance them, who else but the University is going to step up to say that the science we teach and practice is not to be blithely ignored? The time is long past when it suffices to tiptoe politely up to the fossil fuel giants to see if they will now pledge, after years of obfuscation, to respect climate science.

The author is a professor of journalism and sociology at the Journalism School. He is the chair of the Ph.D. program in communications.