We are not waiting

We are not waiting 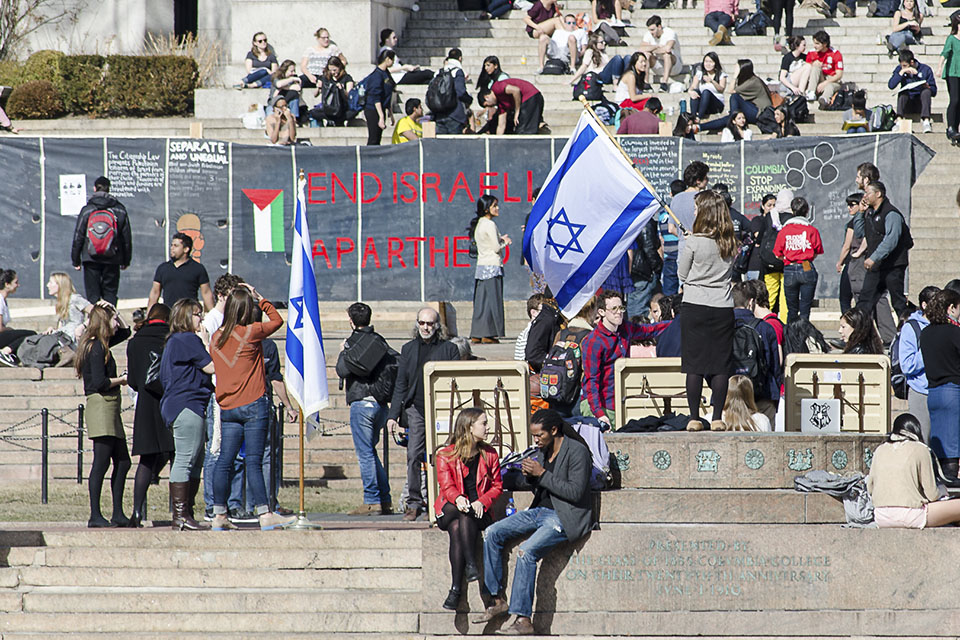 For the first time ever, there is a Jewish voice standing in solidarity with Students for Justice in Palestine at the annual Israeli Apartheid Week on College Walk. Although in previous years Aryeh—formerly known as LionPAC—occupied the Sundial, Jewish Voice for Peace now stands there, calling for equality and self-determination for all people in Palestine/Israel. Though our chapter is new at Columbia, these Jewish voices have always existed; now, we are shattering the illusion of a Jewish consensus on the policies and actions of the State of Israel.

Since our formation last semester, we have created an alternative community for Jewish students who have felt alienated by Hillel, the dominating force in Jewish campus life. Hillel International's Israel Guidelines prevent serious criticism of Israel by prohibiting groups that "delegitimize, demonize or apply a double standard to Israel" or "support boycott of, divestment from, or sanctions against the State of Israel."  This is a deliberate silencing of a growing number of Jewish students who they claim to represent and, as such, we are unable to express our beliefs within the supposed center of Jewish life on campus. Instead, we've created our own.

On Tuesday night, JVP gathered to discuss the week's events and what we have experienced so far. We shared anecdotes about conversations with passers-by and advice for how to deal with vitriol and hate speech. Sitting in that room together was a powerful reflection on what was, for many of us, our first experience of Jewish solidarity in Palestine activism; there was a collective sense of belonging and pride. It has been an incredible joy for us to build a growing community that combines our Jewish values with our commitment to justice in Palestine.

To our dismay, there have been attempts to drown out our nascent voice. We are disappointed by Aryeh's flyering campaign, an attempt to delegitimize our work by asserting that JVP makes the problematic claim of speaking for all Jews. We are a voice that is Jewish, not the voice of the Jews. It is precisely because "no one group ... is the definitive 'Jewish voice'"—as Aryeh so correctly put it—that JVP exists. Until this week, the impression has been that groups like Aryeh or entities like Hillel speak for all Jewish students. Our voice—a Jewish voice that demands an end to Israeli apartheid—has never been heard on this campus, so now we're standing at the Sundial to make sure it is. The question of who can speak for the Jewish people is one that is inextricably linked to our argument. Unlike JVP, the State of Israel has claimed this ability since its establishment, and Israel has committed atrocity after atrocity in the name of the Jewish people. We must take action. We unequivocally support and echo the Palestinian civil society call for a boycott of, divestment from, and sanctions against the State of Israel until it ends its oppressive policies against Palestinians and certainly until it stops using our Jewish identity to justify them.

At our table on College Walk, we've set out to discuss issues that have not been fairly considered in the Jewish community, such as the Palestinian right of return, to speak for themselves and the fact that Israel is an apartheid state. These issues have not been adequately addressed because, until now, there has not been a Jewish group dedicated to broaching them. It is infuriating that our voice as Jews has more legitimacy on this campus than that of Palestinians, some of whom risk their ability to return home to speak up about the injustices they face. Nevertheless, we accept this responsibility to open up dialogue within the Jewish community. This is a historic moment for American Judaism and we hope that Columbia's Jewish community will join us on the right side of history. We are not waiting.