Reflecting on a culture of intimidation

Reflecting on a culture of intimidation 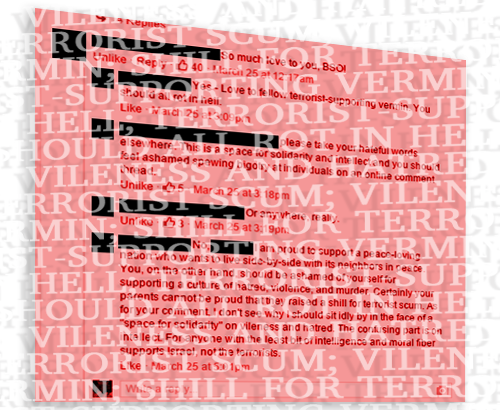 Graphic by Alan Smithee
By Darializa Avila-Chevalier and Yousr Shaltout | April 3, 2015, 8:30 AM

On Tuesday, March 24, Columbia Students for Justice in Palestine held a panel discussion entitled "Media, Solidarity, and Palestine." The event, hosted in recognition of Israeli Apartheid Week, was moderated by professor Hamid Dabashi and allowed Rania Khalek, Alex Kane, Joe Catron and Janine Hassan -four American and Palestinian journalists- to discuss their views and experiences writing on the topic of Israel/Palestine. 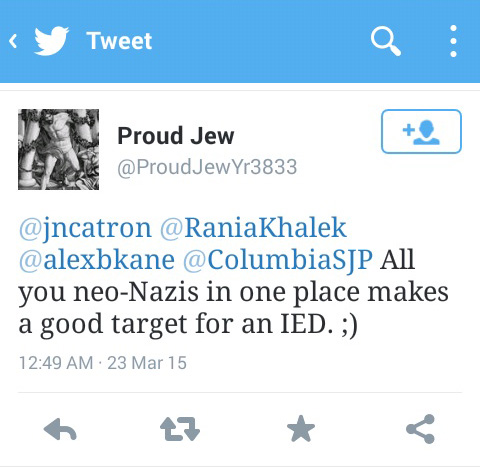 Thankfully, no one was harmed at the event. However, it's concerning that after reporting the incident to the Office of Multicultural Affairs, the administration's only response to a bomb threat was providing a lone security guard. These messages are only a small peek into the larger culture of intimidation that members of CSJP, or more largely, those who speak of Israeli injustices, constantly face on this campus and around the globe.

One incident that exemplifies this very trend transpired last Monday. Members of Aryeh, the pro-Israel student group formerly known as LionPac, flyered all of campus with images that capitalized on the tragedies of the Syrian humanitarian crisis, appropriated Black figures, and underscored issues unrelated to those of Israel/Palestine through a racist conflation of Arab societies. 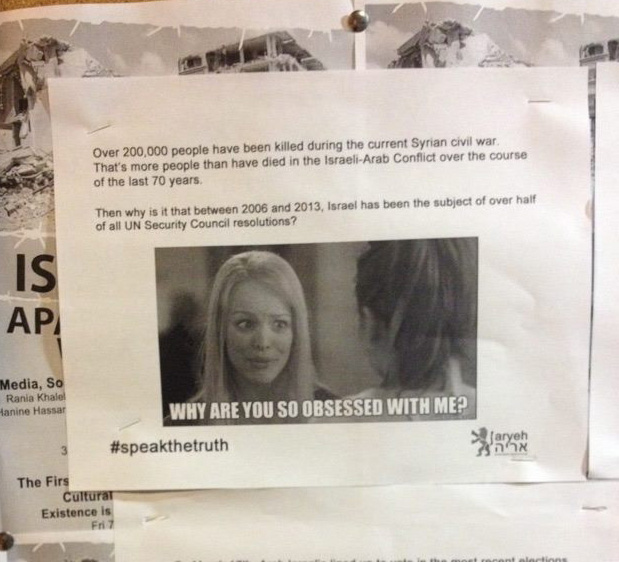 In previous years, during Israeli Apartheid Week, Aryeh would book the Sundial in order to organize counter-programming, claiming to be a platform for dialogue in opposition to the premise of Israel as an apartheid state. This year, the newly established Columbia/Barnard chapter of Jewish Voice for Peace chose to stand at the Sundial in solidarity with CSJP. In response, Aryeh claimed that "Columbia has only authorized an anti-Israel space on College Walk," accusing the administration of not making the space available to them. If Aryeh was truly interested in representing their perspective on the situation, they could have easily booked any other space on Columbia's campus, including spaces on College Walk. Reserving a space is not an act of silencing; attempting to push a new student group from the conversation by intimidating them into giving up their space is. The very fact that members of CSJP must exert time and energy addressing the harassment for speaking on Israeli injustices detracts from the very issues being discussed, which shows how the culture of silencing is at play.

Let us be clear: We do not object to Aryeh's right to express their group's political opinions or to post flyers stating those opinions. However, there is a strange double standard by which speech is protected on this campus. When CSJP hung a banner last year on Barnard's campus to promote Israeli Apartheid Week, it was deemed "hate speech," and immediately removed on the basis that it did not include contemporary internal "borders" (which have never been recognized or respected by Israel to begin with) on an image of the historical silhouette of Palestine. And yet, flyers mocking the deaths of victims of the Syrian crisis (a topic that hits close to home for many students on campus) and belittling people's lived experiences of oppression with pop culture references is somehow celebrated. The continued harassment via the personal Facebook accounts of members of CSJP, JVP, and the Black Students' Organization is also somehow validated as free speech. And a bomb threat to students and faculty is not met with any form of serious administrative action—not even a crime alert.

A bomb threat, or any threat to one's physical safety, is an unnerving experience. The constant bombardment of bigoted and violent messages directed to individuals and to communities is also incredibly taxing and unhinging. But this—threatening the physical safety of minority student groups, ridiculing them and their allies, and mocking the oppression and humanitarian crises of people worldwide—it is just a small sampling of what occurs in the larger political sphere. Palestinian voices are constantly silenced and ridiculed, their experiences invalidated and ignored, their bodies policed and their lives considered expendable.

When expressing the need for freedom of speech on campus, let us not replicate these evident double standards. Let's not create a university space where free speech is extended and curbed where convenient. It is time for us to question what it means to be granted freedom of speech: Time and time again, students of color with an anti-Zionist stance, like CSJP and BSO, are told how and when they should articulate their experiences and liberation, as well as how and when they should respond to harassment. For example, when BSO expressed solidarity with CSJP, Adam Shapiro and Joshua Fattal had the nerve to call the organization "a disgrace to Martin Luther King Jr." and to its community. As if consensus is the only way to have community; as if Black leaders whose legacies have shaped BSO, such as Malcolm X, have not explicitly taken a pro-Palestine stance; as if Shapiro and Fattal are qualified to speak for the Black community.

We experience this everyday: all kinds of harassment, marginalization, and systematic silencing in our call for human rights and equality. Despite all this, we stand at the wall, although our hands are splintered and our heads are aching. We've perfected our English and learned our U.N. resolutions. It's not uncommon to have insults hurled our way: "You bring it all upon yourselves for being such hateful people."