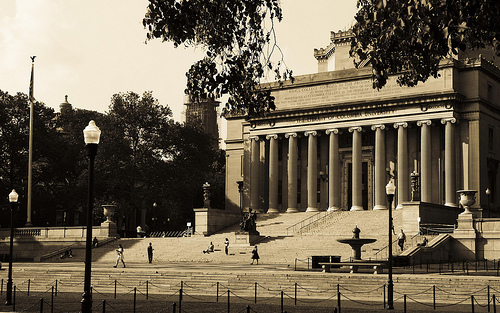 Warning: This article deals with issues of suicide.

Columbia is afraid of me. It is afraid that I will ruin its image of being "more home than home base"—an image that yields it almost 40,000 applicants and $3,400,000 a year in application fees. It is afraid because I could be the next body carried off campus, pronounced dead on the scene: another victim of suicide.

Yes, I'm one of the nearly 5 million college students in America who suffer from some mental health issue. No, this isn't my suicide note.

As someone who found the transition to the Columbia lifestyle—balancing hours of work, club activities, and resumé building time—more difficult than my boarding and prep school-prepared peers did, I've certainly tried to use the professional resources advertised to me. I've done it all—attended walk-in hours, spoken to therapists, and received a referral to a psychologist.

But rather than feel relieved, I felt like I had become a stain on the University's image. I felt analyzed rather than listened to, afraid to say the wrong thing to someone who I felt was just there to report on another student to watch out for. When I said medication wasn't for me—that I had been there, done that—I was made to feel that it was the only option. I needed to snap out of it, as soon as possible. I couldn't be this way, at least not here.

And yet, approximately 1 in 5 adults age 18 to 24 suffers from some mental health problem; 30% of college students nationwide have felt "so depressed that it was difficult to function." This should not come as a surprise to us: a study done by researchers at King's College London found that in students, "achieving an A grade is associated with an increased risk for bipolar disorder." Another from the University of Kuopio in Finland found those who scored high on arithmetic reasoning tests to be twelve times more likely to be diagnosed with bipolar disorder.

Even as a first-year I saw this correlation come to life. I saw mental health issues revisit those for whom they were not new (including myself), just as I saw them settle into many for the first time, triggered by this hyper competitive, pseudo-supportive environment. But despite the many resources and facilities offered by Columbia and used by numerous students looking for help, these mental health issues persist.

Mental health continues to be a major topic of discussion despite yearly efforts to better the available resources. It stays a problem for what I'd say is no reason other than fear; a fear that is brand- and money-driven. For many students, this fear on the part of Columbia means life or death.

Coming here, we are told to succeed. And as students at this university, we know we want to and are capable of succeeding—we've made it here. But our mental health issues thwart us, creating a conflict between our ambitions and what we are possibly mentally capable of doing. I am not saying college is too hard. I am saying the services provided prioritize the interests of the University, not of the students who it is harder for.

After I exhausted professional resources on campus, I contemplated taking a leave of absence. But the information I found on this was from horror stories: students opting to leave but then having a tough time coming back—or worse, not being allowed back on campus due to administrative policies.

I know people will say that maybe I just don't belong here, but that doesn't change the fact that I made it here and still am here—here to succeed. Nor does it change the fact that students have committed suicide on our campus, while one in 10 college students has a plan for their own. And each time, all we receive is an email with condolences and an exhaustive list of resources available to us, the same ones that failed to save other students in the past.

At times, I am barely able to recall the excitement I once felt being here. I see "prospies"  around campus in their tour groups, shielded from my reality. They are unaware that people like me—maybe like them—came here blissfully unaware, and are now struggling because of brains that revolt against us, and a school that is not working with us.

Perhaps working with us just means not being afraid of us.

Sabrina Maliqi is a sophomore in the School of Engineering and Applied Sciences studying biomedical engineering.

To respond to this op-ed, or to submit an op-ed, contact opinion@columbiaspectator.com