All the music you're not hearing

All the music you're not hearing 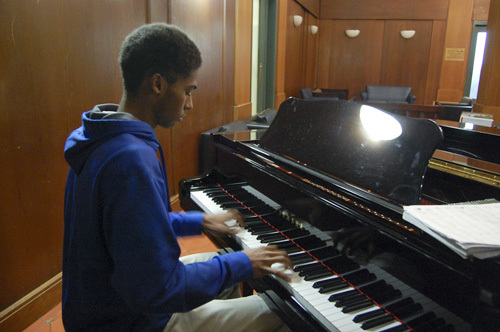 Finding a music practice room at Columbia is like biting into a croissant: either a delicious success or a soggy mess. Securing communal, consistent performance spaces within Columbia's music department, however, is more akin to biting into a stick of butter—distinctly unappealing and nauseatingly difficult.

It isn't simply the lack of any communal space that's troubling. It's not just the gut-punched feeling of walking onto a makeshift stage—found everywhere from the Italian Academy, to Union Theological Seminary, to Teacher's College, to name a few—and attempting to honor months of work in a setting that seems to so disregard it. The lack of a campus space for the communal sharing of classical music, one we can rightfully and finally call our own, contributes to a much heavier problem: classical music's declining relevance in the eyes of the public.

There are undeniably stunning aspects of playing classical music. Learning the world's only universal language is one. Finding comfort in keys, strings, and vibrations when so much of our lives are bound to a strange, intangible digital world is yet another. The friendships we make, the profundity of what we share with others—they're all good reasons to play.

However, a distinct sense of uprootedness and lost home has also come to mark classical musicianship. We can't help but feel antiquated or downright forgotten when, more often than not, our potential audience members would rather double-tap through their Instagram feed, or wrinkle their noses at the prospect of sitting through a two-hour concert.

But you don't have to be at a concert hall to recognize this indifference—you can feel it right here, on campus, when Columbia makes it nearly impossible to find adequate recital space. The tremendous effort that goes into preparing a single piece to share with the community can feel invalidated when there's no communal space in which to share it. It is precisely this lack of a home for musical performances that confirms our fears: that the music we have come to call "home" is ultimately meaningless.

Attending Columbia only magnifies this plight: When it seems we juggle as many commitments as there are keys on a piano, music is there to ground us and remind us of what is real. Unfortunately, Columbia makes it alarmingly easy to neglect our already deprioritized musical studies. Before we know it, we also too easily submit to our culture's growing indifference toward classical music.

But...real estate, the Columbia administration whispers. Real estate in Manhattan. Yet, the upcoming Manhattanville campus' new Lenfest Center for the Arts—surely itself quite the successful feat in real estate—will primarily go to the theater department. What did the administration say when the music department requested its own space at Manhattanville? The same response every time the music department asks for just one space to call its own: nothing.

There could be many bureaucratic reasons for this silence, but as a musician, the hardest one to acknowledge is that music is a dangerous investment. Musicians are already undercut because the audience simply doesn't care enough. Why should the administration care when the majority of its students don't? It's self-fulfilling: missing recital space is one of many manifestations of an audience that is increasingly distant from the music we so value.

To the Columbia administration, I am begging you: allow the music department to fulfill the bare minimum of its duties by at least giving it full-time access to Lerner C555. As a Columbia Classical Performers board member, I've spent more time presenting concerts in that room than in any other designated for student use on campus (and are Columbia musicians not students, too?) I can second the department's assessment of the space as the most "perfect" option we currently have—cozy, adequately soundproof, warmly lit, and complete with an exquisite Steinway "belonging to the music department." The very same department that cannot access its own piano. Let's take a moment to consider that.

To my friends, peers, and classmates, I also beg of you: Recognize the worth of the arts, especially classical music. Even if you don't understand it, even if your ears find it too quiet for your taste, and especially if you think it's "boring"—listen just a little harder. You'd be surprised at what you hear and what you feel, and what your peers—the musicians that you may not even know exist—are making you feel.

Part of me is grateful and relieved that Columbia's musicians have found a friend in Symphony Space. This year, Columbia musicians—90 percent of whom do not call themselves music majors—and 60-plus hours of music will call it their temporary home.

But a temporary home is not enough, and it is also a misnomer. Nothing about it is ours, and calling a home that is temporary is oxymoronic in itself. Columbia—not UTS, not the Italian Academy, not 95th street and Broadway, but right here on our beloved campus—is home. And music is another home, one that is too important to be temporary, too beautiful to be makeshift. It deserves much more than it has received—so, so much more.

The author is a Columbia College sophomore pianist and a member of Columbia Classical Performers studying English, sociology, and business management.