Why I don't have a problem with little "meninist" rascals

Why I don't have a problem with little "meninist" rascals 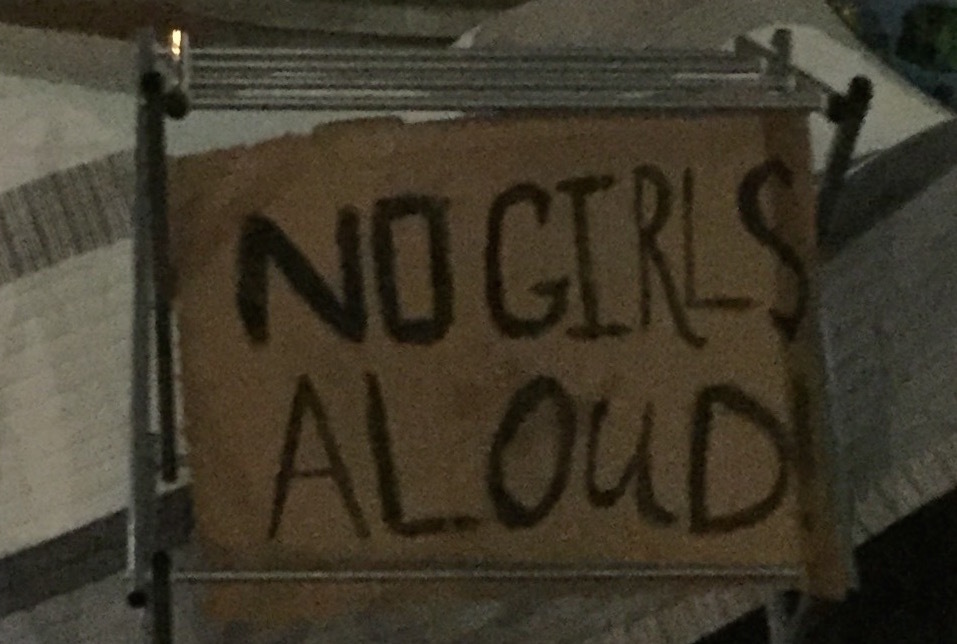 Hazing: the ritual initiation and rite of passage into your typical college fraternity. At many large universities, these requirements for entry may include drinking obscene amounts of alcohol or hooking up with as many people as possible. While these activities are not necessarily looked down upon by fraternities at Columbia, Greek life here is pretty low-key. In fact, the most ridiculous thing frat boys are rumored to have done this semester is build a fort on the campus of the neighboring women's college, Barnard.

This is the second time in the past two weeks that a Columbia fraternity has been accused of holding some initiation "ritual" on Barnard's campus. Last week, some boys stood in the Barnard Quad singing The Star-Spangled Banner, somewhat emulating the serenade scene from "Say Anything." This week, they hid out in a blanket-covered fort with a sign that proudly boasted "No Girls Aloud."

Both times, when I heard about what was going on, I let out the most genuine laugh I'd had in weeks. Why were semi-adult men serenading other students and camping out in a homemade fort? Naturally, I took to the Internet to find out.

As soon as this incident appeared on the Facebook group for the Barnard class of 2019, outrage broke out. Fittingly, people were upset that their midterm studying was so rudely interrupted by boys being loud in the quad. But soon the comments became absurd. Students were claiming that they didn't feel safe and that these guys were being misogynistic and even violent. Really, what appears to have happened is that some guys were pledging a frat.

For young men, being in Greek life means completing a checklist of embarrassing and silly things, including annoying Barnard students (apparently). Obviously, if they were being rude and threatening, there was reason to call Public Safety and have them removed. But to react so angrily just because they were visible and audible while people needed to study? That's a little much.

To put things into perspective: Just the other day, I was studying in Butler Library and the only seat I found faced the lawn. Outside the window were hundreds of screaming children with their parents, running around and jumping on blowup houses. But I didn't call Public Safety, even though they distracted me, much like how the boys on this night distracted some very busy Barnard students.

Yes, of course, the festival outside of Butler was an organized event, while the boys in the Barnard Quad were just being annoying on purpose. But should we completely disband all forms of unorganized or unofficial public assembly? Isn't that a violation of the freedom granted to us by the First Amendment? (The students who fought for Bacchanal last year would say so, anyway.)

The truth is, even though what they said had the potential to hurt other students, those frat boys didn't mean any harm. To assume they're horrible people because they did something dumb would give them way too much credit. They were just pledging a frat and trying to make new friends. They were having a good time, laughing, and trying—unsuccessfully—to flirt with Barnard students who were probably way too cool for them anyway.

I hope that one day, they'll learn the power of their words and what they mean to the women who worked so hard to get to Barnard. That is, after all, one of the benefits of freedom of speech.

Until then, let frat boys have their fun, even if you think their values are a little misguided. Just like everyone else on Columbia's campus, they're still learning how to be real people with real responsibilities and real, valuable opinions.

There are some causes that are worth fighting for. Outrage at this petty kind of Greek pledging is not one of them. So just continue sipping your tea and studying for your midterms. You'll do great!

The author is a Barnard College first-year with prospective majors in political science and economics.