SGA should think twice before supporting No Red Tape

SGA should think twice before supporting No Red Tape 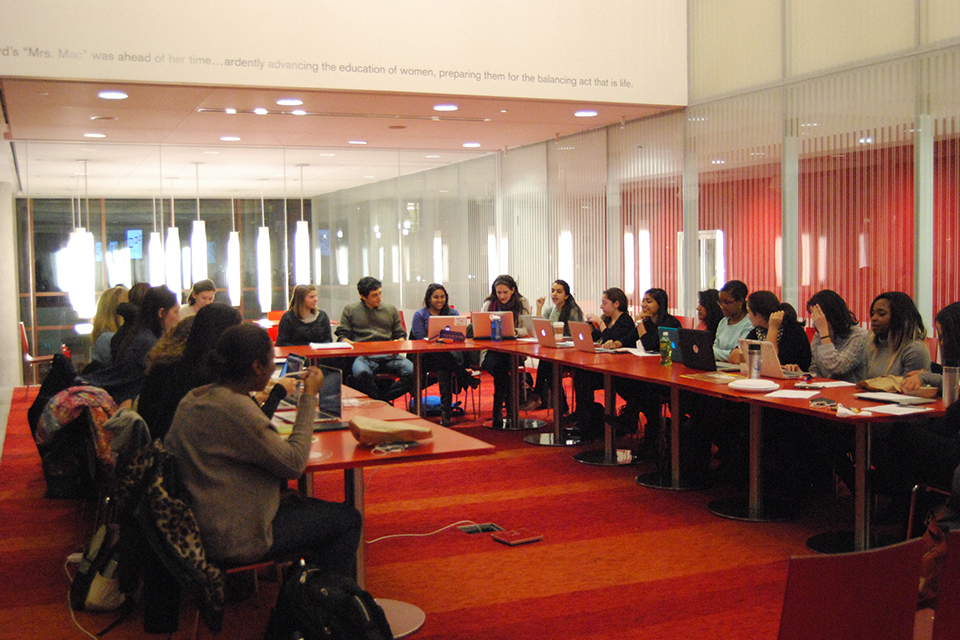 Last night, No Red Tape gave a presentation to Barnard's Student Government Association and called for SGA's public support of its newest petition. Members of No Red Tape emphasized that its demands focus on the Columbia administration—not Barnard's—and made clear that SGA's support would ultimately amount to a symbolic gesture. The group also emphasized Barnard's Values Statement, particularly Barnard's recognition of its "responsibility to address issues of gender in all of their complexity and urgency," as a reason for SGA to take action toward ending sexual violence on campus. I encourage SGA to endorse the issues presented to them, namely sexual assault prevention, but not No Red Tape.

Beginning this semester, No Red Tape has officially taken on an anti-Israel stance. It publicly denounces Israel on social media and collaborates with anti-Israel student groups, such as Columbia Students for Justice in Palestine. No Red Tape claims that its anti-Israel position stems from commonalities between the Israeli-Palestinian conflict—an ongoing geopolitical conflict thousands of miles away—and sexual violence on college campuses. While they may see theoretical strains of similitude, the practical realities of the issues are vastly different from one another.

Ultimately, No Red Tape's decision to align itself with Students for Justice in Palestine is problematic and destructive to its purported aim of enacting actual changes in response to issues of sexual violence on our campus. The Israeli-Palestinian conflict is arguably the most divisive issue on campus; by picking a side, No Red Tape effectively politicized anti-sexual violence work on this campus. Doing so is detrimental to the cause and unfair to pro-Israel survivors.

No Red Tape used to be a safe space for survivors to turn to in crisis, especially if they felt unsupported elsewhere. In the past, a No Red Tape support group open to survivors in the community met regularly. But by making anti-Zionism a primary tenet of its platform, No Red Tape has disqualified itself from being our school's much needed supportive group and community for students across the board. In elevating its political agenda over the needs of survivors, it's reneged on its promise to be "survivor-centric."

I, too, urge SGA to utilize its influence and power to address the needs of survivors by taking necessary steps to increase prevention efforts. However, if SGA votes to support No Red Tape's demands, it would implicitly support NRT as a student group. A public statement of support for No Red Tape's efforts by Barnard's student government—an entity meant to represent the entire student body—would amount to the legitimization of a divisive and alienating student group, one that advocates controversial changes far beyond the scope of ending sexual violence at Columbia.

Ultimately, unless No Red Tape engages with everyone it can, it does not deserve SGA's support. If NRT truly cares about supporting survivors on this campus and eradicating sexual violence within our student body, it shouldn't alienate massive groups of students. As a former core organizer of No Red Tape, I know that we were able to achieve the most substantive policy changes when student support was fervent.

In short, administrators respond to loud voices. After hundreds of students came to the October Carry That Weight rally last year, for example, the administration finally created mandatory prevention programming for all Columbia students with its implementation of the Sexual Respect Initiative. Although flawed, its creation demonstrated that if enough students showed their support, the administration would respond.

Additionally, the problem of sexual violence on campus will only be solved if student actions change, so by turning students away because of political differences, No Red Tape loses an opportunity to engage in meaningful, productive conversations. Forcing people to decide between their support for Israel and their support for efforts to end violence on our campus is unfair, and ultimately harms efforts to improve our campus on this issue.

Given No Red Tape's controversy and overt alienation of countless students, SGA should not blindly support its petition. SGA should not condone No Red Tape's harmful conflation of two disparate issues. Rather, SGA should draft its own statement of proposals modeled off of No Red Tape's demands in a way that advocates meaningful policy change, without regard for any particular student group. Doing so would not only provide a substantive way for them to galvanize support to help address the issue, but also offer the chance to focus on Barnard-specific changes.

When it comes to sexual violence on college campuses, students are part of the problem—but they also can be part of the solution. Therefore, we must come together as a student body, regardless of our political beliefs, to end violence on our campus and to ensure those who have endured violence do not shoulder the burden of survival alone. As an official representative of the student body, SGA can and should reaffirm its support for sexual violence prevention on a broader scale. To that end, however, it cannot endorse No Red Tape's politicized bid for support.

The author is a Barnard College sophomore majoring in art history. She is a former member of No Red Tape and a current member of Spectator's editorial board.