The fight for free speech

The fight for free speech 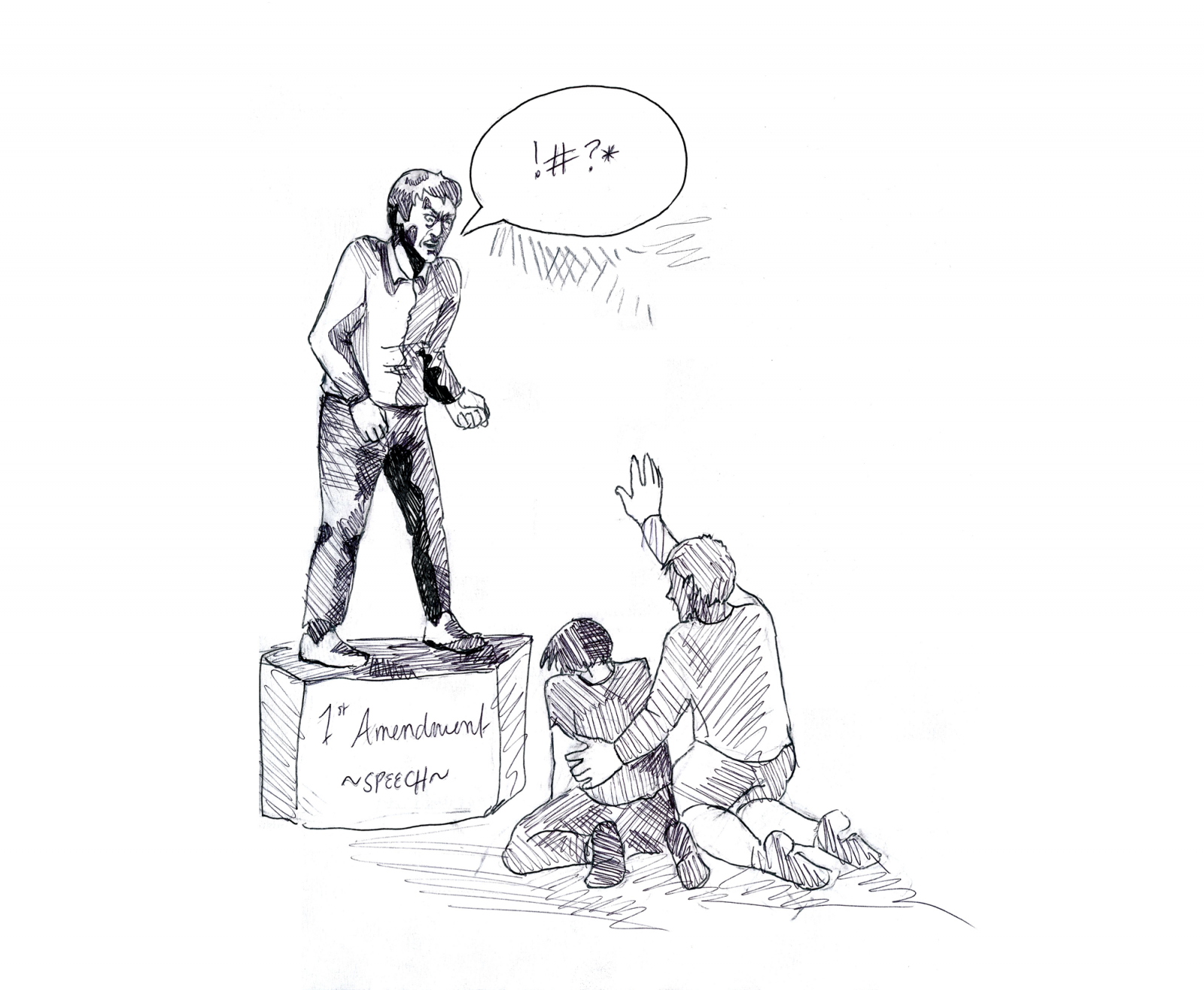 People both on and off campus seemed flabbergasted to see recent polling data claiming that roughly 40 percent of Millennials support government censorship of speech considered offensive to minorities. The very first amendment of our Bill of Rights, after all, focuses on freedom of speech, and time and time again, the U.S. Supreme Court has upheld that amendment by protecting offensive speech that does not advocate violence or directly cause physical harm against others.

For many, this data simply reinforced the narrative prevalent in American mainstream media for months now: America's young people are dogmatic, Marxist censors obsessed with political correctness. Our students are fragile—they want to be coddled, protected from dangerous ideas. They don't respect free speech, or the coveted marketplace of ideas.

While much of that narrative comes down to reactionary hand-wringing, there is a kernel of truth in it: More and more young people have come to question ideal of "free speech" that many older Americans hold dear. At Columbia alone, a number of students have raised objections to Orgo Night because of their perception that the event's language is in itself a kind of violence. Similarly, I encountered quite a few people who bristled at President Lee Bollinger's declaration, in the wake of the Mizzou protests, that we hold "a steadfast belief in the value of free expression, even when offensive or dangerous."

For most older Americans, and many young ones as well, "free speech" is a kind of cultural ideal; protesting an event for its language is anathema to that ideal. All speech should be welcome, no matter how offensive, heinous, or vapid, into the public arena. For a significant number of younger Americans, however, the equality of all speech seems dubious. This debate around free speech has become especially public at Yale, where a number of students took issue with an administrator's statement that the school should not discourage white students from wearing certain Halloween costumes. In their activism, these college students have raised a number of valuable questions: Don't all students have a right to feel comfortable in an institution regardless of ethnicity, gender, or sexual orientation? Isn't the psychological harm of offensive language significant enough to warrant protection? Why does the exercise of free speech for its own sake trump the feelings and desires of those toward whom the speech is directed?

Some critics of the current student protests voice legitimate concerns. Many fear that the current political climate on college campuses quashes legitimate, open inquiry. While many activists feel that certain questions of race, ethnicity, and gender have been answered, an equal number of critics feel that these issues are still up for debate—and these critics fear that over-policing offensive speech may prevent us from collectively answering them as effectively as we can.

Nevertheless, most critics who attack these protesters do so disingenuously. For all their talk of discourse and marketplaces of ideas, critics fail to do the proper research into the positions of their opponents. Rather than dealing substantively with the questions these activists raise, critics dismiss the students themselves as weak-willed dictators. They accuse students of wanting to be comfortable when they themselves dismiss student protesters out of their own discomfort.

These critics miss the real substance at the heart of these protests. Suggesting that there is a real relationship between speech and harm is not a sign of a weak or coddled mind. It is a relationship we already acknowledge in other contexts. Just look at how we treat cyberbullying, or any other kind of bullying really. A child doesn't need to throw a punch to be a bully. All he needs are words. We already know that speech is often action in itself. We know that speech can cause as much harm as any fist.

The free speech that we often deem harmless has physical consequences. To see them, one doesn't have to look further than the countless white terrorists that have become household names this year. Just last week, 57-year-old Robert Dear, a white man, killed three people at a Planned Parenthood clinic in Colorado Springs, Colorado. Dear allegedly told police following the incident, "no more baby parts," alluding to the series of sting videos released over the summer falsely accusing Planned Parenthood of selling fetuses. Earlier this year, Dylann Roof killed nine people in Charleston, South Carolina in an act of race-based terrorism. In the wake of his arrest, it became publicly known that Roof was a frequent visitor of the site the Daily Stormer, the most popular white supremacist and neo-Nazi site on the Internet.

Now, neither the Daily Stormer nor the Planned Parenthood videos explicitly advocate violence. These organizations are just exercising their first amendment rights. Yet, while Dear and Roof became killers for a variety of reasons, it feels fair to question the role that these speech acts played in influencing them. Would Robert Dear have held Planned Parenthood in such contempt if not for those videos, or if Carly Fiorina had not been allowed to tell lie after lie on national television regarding the organization? Would Dylann Roof have murdered those men and women if he hadn't been frequenting a website that literally features a section called, "Race War" on its front page? Do men feel more comfortable committing sexual assault when jokes such as "no means yes, yes means anal" are protected speech? Do people feel more comfortable discriminating against Muslims in actual terms when political figures like Marco Rubio compare them to Nazis?

It is a mistake to accept the current crop of student protests uncritically. These students aren't right about everything; still, even when wrong, these voices raise valuable questions that require further discussion. To dismiss the debate on free speech as a manifestation of mental weakness is in itself anti-discursive. Those who criticize current activism need to actually engage with the ideas that these activists put forth. They need to understand where these students are coming from. Doing so is an integral part of effective democratic discussion.

More importantly, these protestors have a point in questioning our current conception of free speech. Speech does not exist in a vacuum free of actual consequences. It does not need to advocate violence to create violence. The line between speech and action is often much thinner than we think—if you have any doubt of that, just pay a visit to the Daily Stormer. I did, and it was one of the most informative and horrifying things I've done in a long time.

Certain elements of current campus protests do in fact threaten free and open inquiry. So do dismissals of the claims and positions of those who protest. Discourse is a two way street. For any effective conversation to occur, each side must work to understand the positions of the other. Critics of these movements must take a more rigorous approach in studying this activism. Only then can we hope to reach any kind of productive discourse about the relationship between speech and consequences.

AJ Stoughton is a Columbia College senior double majoring in American studies and English. He is an editor in chief of the Columbia Review and a board member of The Jester magazine. But Wait Let Me Finish runs on alternate Mondays. He can be found on Twitter @AJStoughton.