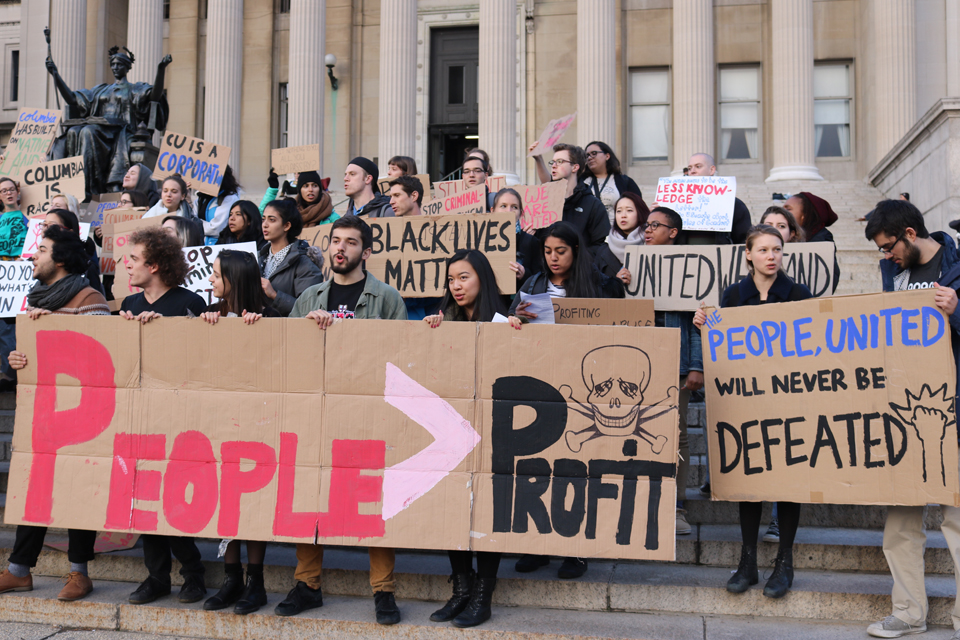 On Monday, students rallied on Low Steps in support of the Barnard Columbia Solidarity Network, a new activist network formed in order to "mobilize in a common struggle for liberation" and to "oppose the University's prioritization of profit over people." The coalition published a set of core demands, an underlying theme of which is making Columbia an environment that is conducive to the success of students of color. These demands address overlapping concerns of the groups that constitute BCSN and deserve serious engagement.

The first demand focuses on fossil fuel divestment and calls on Columbia to "[revoke] the financial support and social license that the University, as a global political actor, grants the fossil fuel industry." The editorial board has already addressed this topic in a previous staff editorial—"Divestment without discourse." Ultimately, we feel that no proposal thus far, brought through the appropriate administrative channels, has made a convincing case for divestment; as such, it is not clear that the University should immediately divest.

The second demand says it is imperative to properly treat "experiences of trauma in marginalized communities," but it bears noting that no "radical restructuring" is necessary to achieve that goal. Earlier this year, CPS expanded its staff by hiring eight psychologists of color and a transgender clinician. And while there's work to be done at Barnard's Furman Counseling Center, specifically when it comes to accommodating transgender and gender nonconforming students, this hardly calls for a radical change in Furman staffing.

Demand No. 3 targets the financial hardships that students and staff experience at Columbia. Of course, we believe that the University should enforce its own guidelines and pay workers on time, and that it would be worthwhile for the University to continually look to expand the range of positions under the work-study program. However, we have reservations as to the feasibility of the direct proposals to eliminate the student contribution and increase wages to $15 per hour for "all work-study, casual employment, and campus jobs, including unpaid volunteer positions."

The demand that a variety of positions be paid at $15 an hour is also unrealistic. Volunteer positions are precisely that—volunteer positions. Introducing pay necessarily changes the dynamic of the position, and might attract those interested in the pay, and not the position itself. If students wish to receive compensation for volunteer work with an on-campus organization, then those organizations should communicate with the University to see if they can offer work-study or student employment.

The fourth demand insists on increased employment of faculty of color. Unfortunately, one of the primary roadblocks to any such employment effort is the relative scarcity of minorities in academia. Still, it's important to acknowledge that for over a decade, Columbia has allocated substantive amounts of funding to diversity hiring initiatives.

[Related article: Why is diversity so important?]

In 2004, toward the beginning of President Lee Bollinger's tenure, Columbia created the Office of the Vice Provost for Faculty Diversity and Inclusion; this is the longest-running diversity initiative within the Ivy League. In 2005, Columbia's trustees committed $15 million for a recruitment campaign aimed at minority and female faculty; in 2012, Columbia committed $30 million more. As of fall 2014, Columbia's Faculty of Arts & Sciences programs employed roughly 17 percent minority faculty (76 of 448 total tenured professors). In April, President Bollinger and Provost John Coatsworth announced "the commitment of an additional $33 million for recruitment, support, and related programs" pertaining to the University's continued diversity initiative. And just this semester, Columbia recruited two minority faculty members from Yale.

As such, demanding that Columbia hire more minority faculty, while well-intentioned, isn't aligned with the reality that there simply isn't a substantial pool of applicants from which to hire. In a Spectator article published in April, Provost Coatsworth addressed this issue: "[The] reason we have to pay particular attention to hiring women and minorities is because there are many fields in which the pool is too small." As such, a more fruitful demand would focus on the broken pipeline into academia for minorities, and Columbia's efforts to expand and develop that pipeline.

The fourth demand also proposes restructuring the Core Curriculum and making "Intro to African-American Studies and Intro to Comparative Ethnic Studies [...] required Core classes." Expanding the Core Curriculum to include two additional classes is a hard proposal to support—for starters, Columbia would have a hard time finding professors to teach these two classes well. However, the demand raises an important question: is the Global Core in its current implementation worthy of the Core Curriculum? In 2007, students engaged in a hunger strike, demanding Core Curriculum reform and the expansion of Ethnic Studies, among other things. What resulted was a watery compromise, largely favoring the administration; as a result, Major Cultures, the Global Core's maligned predecessor, was simply rebranded. Perhaps this is a debate worth revisiting.

The fifth demand calls for "the creation of a food pantry that serves students, staff, and faculty who are food insecure." This would be a wonderful idea if implemented correctly. However, other aspects of the same demand merit a closer look. The request to admit more black students is notable at this particular junction in American history. However, it should be noted that such a commitment—to admit a higher number of black students—would flirt with the limits of legality. It would be impossible to verify Columbia's adherence to this demand, as Columbia would never admit to complying.

Demand No. 6 addresses Columbia's role in the Morningside Heights and Harlem communities. There is little doubt that Columbia's presence in Manhattanville will impact neighboring areas; still, it seems inequitable to focus only on the "Black communities [...] including, but not limited to, Harlem and the Bronx." Demographic data from Harlem, Manhattanville, and the Bronx suggests that we ought to also consider Hispanic, Asian, mixed-race, and other minority communities in these neighborhoods, which constitute almost half of the total resident population. Columbia can always be called on to do more to help the surrounding community; we only ask that the BCSN works for the benefit of all marginalized groups, rather than focusing only on a select few.

BCSN's demands raise a substantial number of points, more than can be addressed in a single staff editorial—this is by no means an exhaustive critique of the demands. Ultimately, the list calls for the attention of all of us at Columbia, and we hope that students engage with these demands, both to praise their merits and critique their faults. At the core of many of these demands is a sincere hope to change the University for the better. While Columbia has certainly made questionable decisions regarding activism in the past, it should be encouraging that Columbia has staff—from Suzanne Goldberg's gender-based misconduct task force to the vice provost for faculty diversity and inclusion—dedicated to causes championed by activists on campus. More earnest efforts at communication on the part of both activists and the administration would make for more productivity on both ends.

Editor's note: Due to an editing error, one paragraph—regarding demands made of the Global Core—was omitted from the version first published.