Sweetgreen and the sugar tax

Sweetgreen and the sugar tax 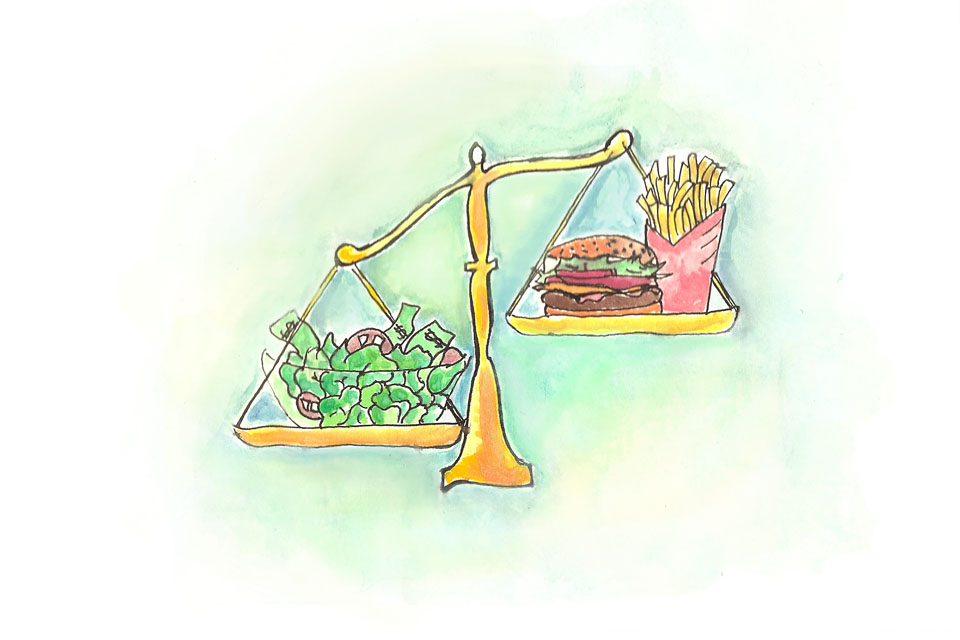 Both Sweetgreen and Dig Inn are near campus and offer food that's quick to order and easy to take out. But out of the five of us, I had the easiest time making my decision. As a 19-year-old woman who still hasn't outgrown her childhood fear of salad, I refused to settle for a bowl of overpriced leaves.

For most Columbia students, Sweetgreen has a certain allure. It's a relatively healthy alternative to fast food, it has a clean storefront, and its location is prime—right next to campus. Sweetgreen has it all! But is it worth the price?

Last semester's "Things you can buy for the price of a Sweetgreen salad" by Camille Sanches, CC '18, sardonically pointed out that no, it's not worth it. I'm interested in what else Sweetgreen has to tell us. Sweetgreen has not only made it easier for people to make healthy decisions—it has also illustrated the unequal socioeconomic landscape of the world in which we live.

The 2008 documentary Food, Inc. explores the issues plaguing the food industry, including the inconvenient truth that, in the U.S., fresh fruit and vegetables cost more than fast food. The film depicts a family who had to decide between paying for their father's heart medication and eating healthily. Eating healthily would help prevent heart disease for the rest of the family, but they resorted to paying for his medicine and eating fast food to save the extra cash anyway.

You can do the math just as this family did. A McDonald's Big Mac is $3.99, and this full meal has approximately 569 calories, while a Sweetgreen salad averages 358 calories for around $10.00. A Big Mac costs less than one cent per calorie, while a Sweetgreen salad costs about three cents per calorie. Sweetgreen effectively charges three times what McDonalds does for the same number of calories. While a wholesome, fresh salad is obviously healthier than a processed hamburger, the energy exchange is a complete rip-off, which makes it easier to choose the burger.

The healthy choice should be the easier choice. However, for the 68 percent of adult Americans who are overweight or obese, the healthy choice isn't easier. One way to immediately curb the overconsumption of sugar would be to introduce a sugar tax. If you're unsure about this, remember that the U.S. already taxes two major unhealthy products: alcohol and tobacco.

Just last month, the National Health Service of England proposed a 20 percent sugar tax on its hospital cafés. The major idea behind this sugar tax is to stymie the rising hospital costs caused by the growing number of patients with sugar-related health problems. The money gained from this tax would go to hospitals to take care of those with heart disease, diabetes, and other related illnesses.

While this all sounds well and good, the sugar tax obviously isn't an easy imposition. If implemented in the US, the tax would directly impact families of lower economic status because what they can afford—e.g. the Big Mac—tends to be higher in sugar. A sugar tax would essentially punish low-income families and equate poverty with a lifestyle choice. Sure, the tax would prevent people from making unhealthy decisions that could become costly in the future, but it would also make cheap alternatives for struggling families that much more expensive.

In a perfect world, we would all be rewarded for healthy decisions: Produce would be cheap and fast food a luxury. But we don't. We live in New York City, where everything is exceedingly expensive, and the cheap route is usually the easiest.

So can we enjoy Sweetgreen when we know that its cost is the result of a skewed pricing system? Certainly. As Columbia students, we need to recognize the implications of that pricing system, and use that understanding to become informed consumers.

After all, Sweetgreen might be too pricy to satisfy every (not so) sweet tooth.

Jackie Hajdenberg is a Barnard first-year with a prospective major in comparative politics. All the Rest is Commentary runs alternate Thursdays.