Campus discourse and the Pinocchio problem

Campus discourse and the Pinocchio problem 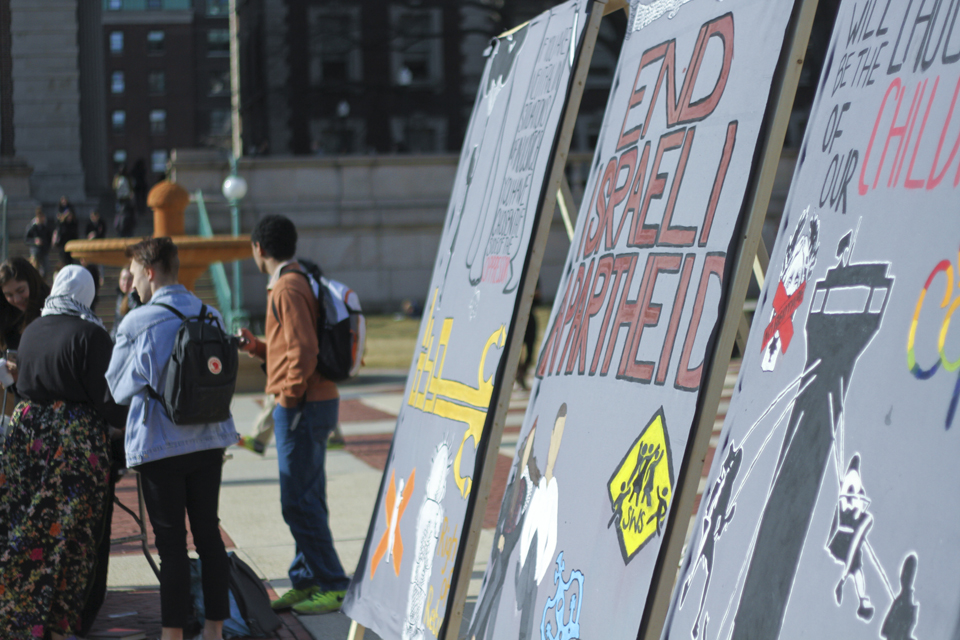 Students Supporting Israel was started in 2012 at the University of Minnesota, and today has about 45 chapters across the United States. Their mission "is to be a clear and confident pro-Israel voice on college campuses, and to support students in grassroots pro-Israel advocacy". It's an organization whose name suggests broadness and inclusivity, but whose practices do the opposite.

At Columbia, SSI is a small group on the outskirts of the Israel-Palestine debate. Columbia's SSI chapter has "somewhere between five and 12 active members" according to an anonymous source, and was established in October of last year. In my mind, SSI has the potential to represent the entire spectrum of Zionist opinions on campus. But if this week's Pinocchio event is any indication of what they're trying to achieve on campus, then speaking as a pro-Israel student, I'm not sure I want to be a part of it.

Part of what makes being an Israel advocate on campus so difficult is not only the complex situation we need to communicate to the public, but also the general scrutiny that comes with supporting Israel. Being pro-Israel on college campuses is becoming increasingly unpopular. And the persuasive recruitment tactics that anti-Israel groups possess are effective, abundant, and difficult to counter. So if pro-Israel groups constantly defend against every attack posed by the opposition, this presents several problems.

First, the Pinocchio metaphor clearly conveyed the message SSI meant to make public: That Israeli Apartheid Week and its supporters spread lies about what's going on in Israel. But SSI needs to recognize that even though they find IAW's material offensive, anti-Semitic, or otherwise threatening, Students for Justice in Palestine has the right to demonstrate, whereas SSI is not an officially recognized club and cannot be guaranteed the administration's protection if they choose to respond. Until they are officially recognized by the University, they cannot receive the same protection as other groups.

Second, protesting the protest looks aggressive, which is exactly the image of the Zionist that anti-Israel groups wish to establish—that Israel and its supporters are belligerent. By constantly defending ourselves against every threat, it perpetuates this perceived notion of Israeli hostility. But that is the exact opposite message that Israel supporters want to spread. Zionism "is the belief that Israel belongs to the Jewish people". So what is the point in SSI's demonstration if it feeds the Boycott, Divestment and Sanctions movement's so-called lies about how Israel is a warmongering and otherwise hostile nation? There are enough groups worldwide that undermine Israel's right to exist, and Israel's own supporters should not contribute to that argument.

Finally, though certainly a clever form of protest, SSI's Pinocchio demonstration uses the same tactic—demonization—as the very groups it opposes. What sort of legitimacy can SSI's argument have if they use the same methods as anti-Israel groups to be pro-Israel? They're fighting fire with fire when they and other Israel supporters instead need to be the extinguishers who champion discussion and progress. This is the image that Israel supporters should be painting, not that of aggression and absurdity.

So when SSI calls out Israeli Apartheid Week and the BDS movement for their lies with this tacky yet compelling counter demonstration, it strengthens the public perception of Israel supporters as militant, ignorant people. Yes, Pinocchio communicates the message they want made public: That IAW promotes baseless lies verging on anti-Semitism.

The way SSI did this also creates the impression that all Israel supporters are belligerent and require responses to every offense. This is not the tactic of Israel supporters as a whole. SSI's actions do not reflect the views of all students who support Israel. Our tactic is discourse, which groups like Aryeh and J Street proudly encourage on our campus, unlike SJP. Instead of using the same strategies as anti-Israel groups, we're just going to need to get more creative. So let's start talking.

Jackie Hajdenberg is a Barnard College first-year with a prospective major in comparative politics. All the Rest is Commentary runs alternate Thursdays.