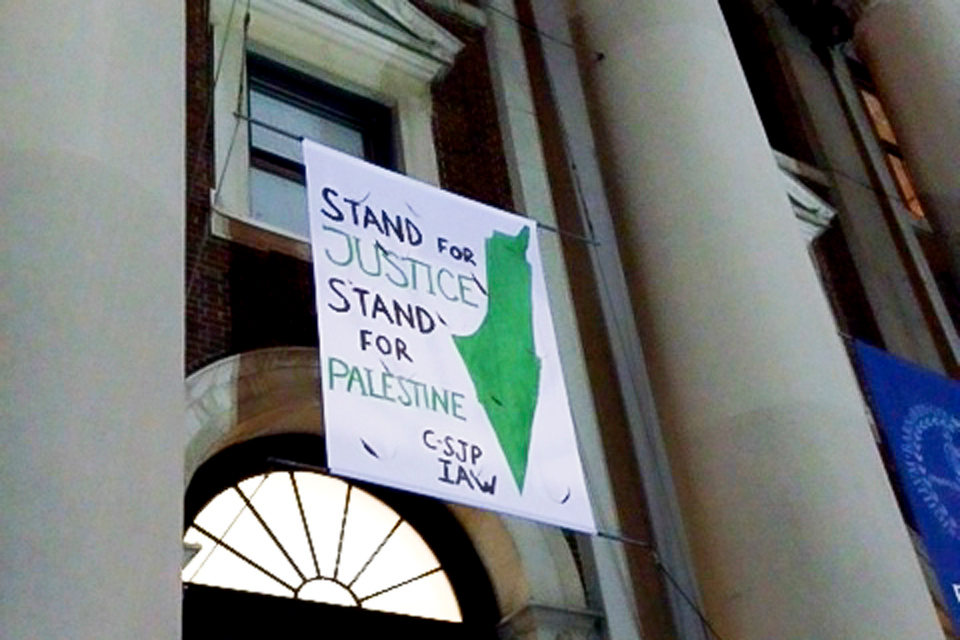 After posting a statement on our group Facebook page in solidarity with the newly launched Boycott, Divestment and Sanctions campaign on campus, we, the Barnard-Columbia Socialists, have found ourselves the victims of an apparent intimidation campaign launched by pro-Israel students. The ostensible reason for these attacks? The inclusion of a popular Palestinian chant, "Long live the Intifada!" in one of our Facebook posts.

On Feb. 22, Spectator published an op-ed by Amalia Reich. In it, Reich stated that our Facebook status made her feel "exposed and unprotected" and that our statements were "only one step away from actually conducting [violence]." Since then, pro-Israel groups on campus such as Students Supporting Israel and Aryeh: Columbia Students Association for Israel have teamed up with their well-funded national backers to paint our solidarity with the Palestinian liberation struggle as a call to violence, terrorism, and anti-Semitism. A petition signed by 600 students, alumni, and faculty members was also recently released, accusing us of "malicious incitement" and claiming that our views on the Palestinian struggle "should find no welcome within our campus discourse."

But in the past few days, this attack has moved from a social media smear campaign to administrative action. We were informed Monday that more than 60 students have coordinated the submission of complaints to the administration claiming that the post constituted a threat of violence to pro-Israel students on campus.

To be clear, these allegations are patently false. Our statement was neither a call for, nor an endorsement of violence. Reich's insistence that the Arabic word "intifada" means "armed uprising" and represents a call to violence rests not on fact but on racist stereotypes of the Arab-speaking world.  The literal meaning of the word "intifada" is actually "shuddering" or "to shake off," though it is more commonly understood to mean "uprising." It is a testament to Zionist racism that their fixation on Palestinian violence has caused them to distort the meaning of this word.

We believe that the real intent of these complaints and misrepresentations is to stifle the free expression of ideas on campus—and, specifically, to marginalize and intimidate anyone standing in solidarity with the Palestinian struggle. This is not unique to our campus. The group Palestine Legal, in collaboration with the Center for Constitutional Rights, has documented what they have called The Palestine Exception to Free Speech after receiving hundreds of complaints from students and scholars pointing to a pattern of censorship, restriction, and punishment of those advocating Palestinian rights. And the "lodging of false and inflammatory accusations of anti-semitism and support for terrorism" is one of the tactics Palestine Legal has seen repeatedly deployed.

While the attempt by Zionist students to smear the growing call for divestment from Israeli Apartheid (BDS) is to be expected, we are deeply concerned by the Columbia administration's failure to defend our most basic free speech rights. On Monday, we were informed that we were being investigated by the Office of Public Safety under the pretext that it is Columbia policy to investigate all complaints of violent or threatening conduct. Our advisor has assured us that this investigation is ending and has found the claims to be unsubstantiated. But as of the publication of this op-ed, we still have not been contacted by Public Safety, nor informed of the scope of any investigation or what due-process rights, if any, we were or will be afforded. Even our advisor could not inform us as to who had been investigated or what surveillance had taken place.

All students and faculty at Columbia, regardless of their own political stance, should be alarmed by the administration's conduct and what it signifies. We do believe the University has a responsibility to investigate genuine threats of violence, and we have seen such real threats on our campus, from nooses hung on the door of an African-American faculty member to a bomb threat directed at last year's Israeli Apartheid Week. However, the University has an equal responsibility to protect its students and faculty from warrantless and slanderous attacks.

This is particularly true when these attacks are directed against groups that are already vulnerable, as is the case with Palestinian, Muslim, and Arab students. We have been told that Public Safety could turn over any materials found in its investigation—again, the scope of which and our rights within which we still do not know—to the New York Police Department. This is the same NYPD that, just a few years ago, was revealed to have engaged in systematic spying on Arabs and Muslims at Columbia. Imagine how intimidating this has been to all our members, but particularly to our Palestinian member as well as our Arab and Muslim allies.

The truth is that these events are only the latest in a long history of silencing Palestinian solidarity speech at Columbia. Until his death in 2003, professor Edward Said was the target of frequent and completely unsubstantiated attacks labelling him an anti-Semite and demanding his firing. To its credit, the Columbia administration defended Said; however, it was not so quick to come to the aid of current Columbia professor Joseph Massad when the David Project, a multi-million dollar Israel advocacy group, launched a years-long witch hunt against him based on unsubstantiated allegations of anti-Semitism and bias against pro-Israel students. Even following a 2005 University-supported investigative committee proving the allegations false, Massad's tenure case lasted several more years despite a glowing teaching record and highly respected scholarship in his field.

Even in more recent years, Palestinian solidarity activists at Columbia have continued to have their freedom of speech curtailed by on-campus Zionist groups and the University administration alike. Just two years ago, the Barnard administration took down a university-approved banner reading "Stand for Justice, Stand for Palestine" as a result of nearly identical attacks to those we face today, calling the banner's language "threatening."

It is in this context that we should understand the most recent onslaught of pro-Israel forces on the rights of Palestinians and their allies to be heard. Whether this be by systematically ripping down flyers, publishing profiles of individual activists in racist online blacklists, or routinely harassing students on campus daring to speak up for Palestinian human rights in their daily lives, these groups have shown themselves to be much more interested in the denial of free speech to those who stand with Palestine than actually contesting our analysis of Israeli apartheid.

The authors are members of the Barnard-Columbia Socialists.