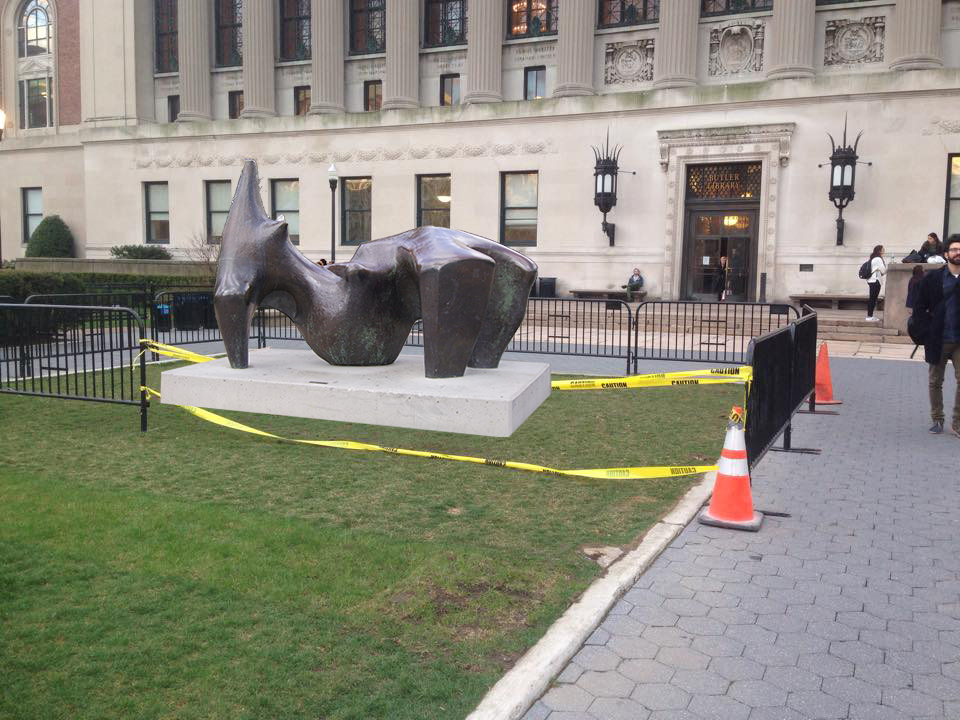 "Mr. Bollinger, tear down that sculpture!"

On Monday, it came to our attention that the University plans to permanently lodge a hideous sculpture in front of Butler Library. Administrators have not announced an unveiling date, but we expect installation to be completed within days.

The bronze monument, titled Reclining Figure, was sculpted by the noted English artist Henry Moore—presumably after he woke up from a terrible nightmare. As both inheritors and wards of our beautiful campus, we object to this desecration of our home. We also condemn the administration's surreptitious launch of this offensive project.

Setting aside aesthetics and practicality, the installation of any sculptural work in our tiny strip of Manhattan invites special discussion. It would not have been hard to announce the sculpture in an email to students or a press release to the news outlets students actually read. But the University's curator of art properties felt it sufficient to slip the news into "Public Outdoor Sculpture at Columbia," a blog so obscure that it only clocked three entries and two comments in all of 2015. Either those responsible for this move were oblivious to the significance of this decision, or they wanted to preclude any discussion of it.

According to the blog, Moore's Reclining Figure "is meant to suggest the form of a woman with her legs outstretched before her, propping herself up with her forearm." It also, we submit, suggests a dying mantis or a poorly formed pterodactyl. The sculpture is so repulsive that when thieves stole Moore's original cast, valued at £3 million, they literally chopped it up and sold it for scraps.

Whatever its artistic merits, placing the sculpture in front of Butler Library will put an eyesore on an otherwise crisp, geometric, and symmetrical landscape. Moore's ghoulish figure clashes with the neoclassical aesthetic instantly recognizable to generations of Columbians. South Lawn, in particular, hosts the two sights most closely associated with Columbia: Low Library as seen from Butler Library, and Butler as seen from Low. Reclining Figure, a lumpy hulk of metal plopped between the two, interrupts that grand vista.

All of this is not to say that modern sculpture has no place at the University. It just doesn't belong in the center of campus. The Curl in front of Uris Hall? Tucked behind Low. Bellerophon Taming Pegasus, astride the law school? Firmly out of sight. And Henry Moore's own Three-Way Piece, the spinny tooth on the East Campus bridge? Well, it's on the East Campus bridge.

Adding insult to injury, the narrow stretch of lawn that Reclining Figure will inhabit is the only part of South Lawn permanently open to the public. The sculpture's girth will intrude on the precious few square yards of grass where students congregate together, be it over soccer or cigarettes.

Students at Columbia often speak of a "war on fun." But this latest salvo from the administration crosses a solemn line—a war on our spirit. Butler may be brick and mortar, but the library also represents an idea. Its façade stands tall, watching over generations of Columbians, testifying to the enduring influence of humanity's greatest thinkers.

Indeed, for many of us, Butler Library is synonymous with Columbia itself. Moore's monstrosity besmirches our library, our athenaeum, with its arrogant middle finger to the world.

We recognize that Reclining Figure may already be a done deal. The foundation has been dug, the announcement made, albeit quietly. But as we write, Reclining Figure is not yet moored in front of our beloved Butler. We cling to some hope that it's not too late—and that Alma Mater won't have to stare at that ugly hunk of metal for the rest of goddamn time.