Don't use your discomfort to discredit student activism

Don't use your discomfort to discredit student activism 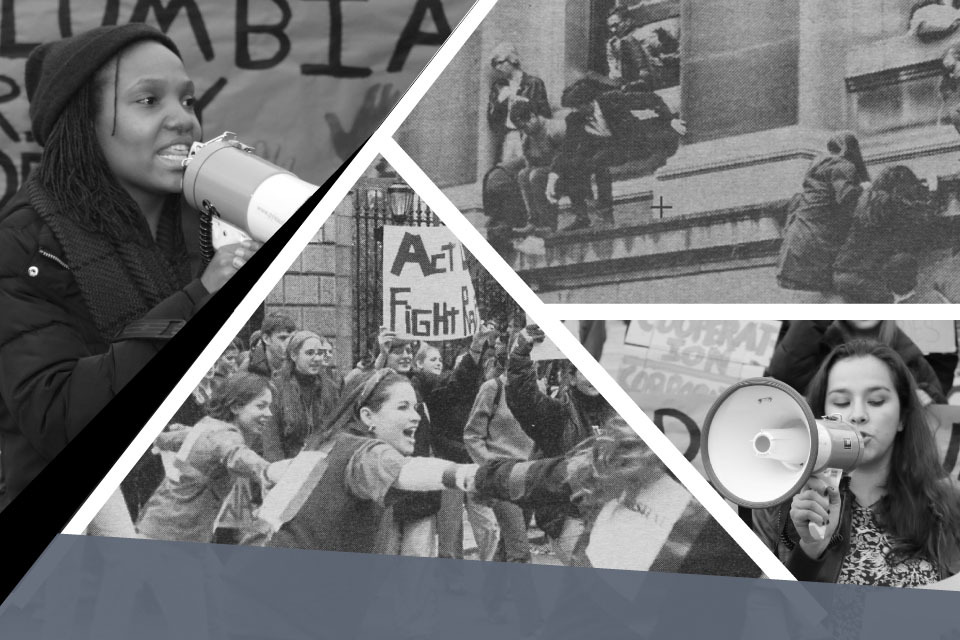 I used to feel embarrassed by the term "activist." When I was heavily involved with the Fight for $15 movement, I'd stress to family and friends that I was just supporting a larger crusade. But by no means did this careful, deliberate wording change what I was doing. I still swept through countless McDonald's restaurants hollering, "Hold the burgers, hold the fries, we want our wages super-sized!" I led teach-ins and championed the campaign on local television; I even stood hand-in-hand with workers as Vice President Biden and Governor Cuomo announced New York City's minimum wage increase at the Javits Center. Dancing around epithets was a fruitless endeavor—but I couldn't shake the stinging derision of being thought of as an activist.

My shame was rooted in contemporary stereotypes: short-lived advocacy from privileged college students, usually to a cause that has nothing to do with them. Campus activists have rarely been placed in the same league as history's most celebrated activists. Those enshrined in our textbooks are recognized by calculated adherence to a set of political opinions or behaviors. Their robust networks and institutions were built by the likes of Eugene Debs, Martin Luther King Jr., and Dolores Huerta. The personal was overtly the political: They fought within the intersectional hardships that they sought to change.

But when did the dominant narrative start delegitimizing campus activists? Let's look back to mid-20th century stasis and the fresh optimism of Kennedy's presidency, often seen as augurs to youth counterculture in the 1960s. Several invigorated coeds gathered in Michigan under the banner of Students for a Democratic Society. These intellectuals penned a lofty agenda for participatory democracy known as the Port Huron Statement. Their 1962 manifesto resonated across colleges, forging a broad-based, grassroots movement.

This New Left reinvigorated a passion for social action. They wanted to shift liberalism away from hierarchal organization and becoming the "dignified retirement home for aging social democrats." They believed, instead, that anyone could be an agent of social change through demonstration.

At Columbia specifically, SDS followed a wave of moderate organizing. Prior to its founding in 1965, students had held sit-ins against CIA campus recruiting. They had striked with dining hall workers and boycotted University-sanctioned rental listings that barred students of color. Petitions disavowing Columbia's relationship with the Institute for Defense Analyses, a government weapons think tank, had circulated campus. Framing the University's corporate interests as antagonistic to students, SDS directly charged Columbian men and Barnard women with taking back the institution's power and countering capitalism, imperialism, racism, and other isms with guerilla tactics. 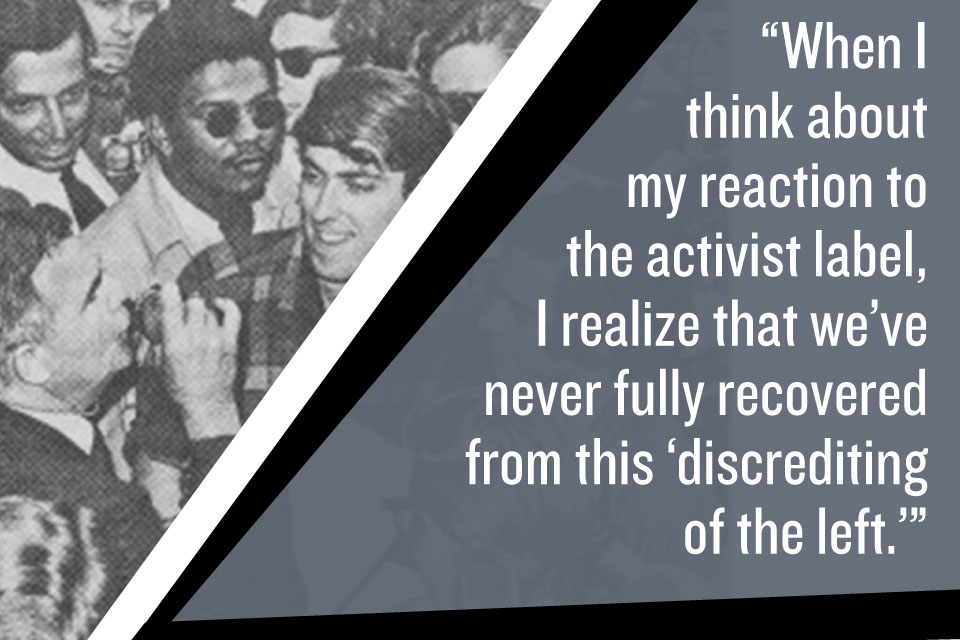 These came to a head in March 1968 when rambunctious Mark Rudd threw a lemon meringue pie at a Selective Service official, challenging the American war machine and draft rules. Next month, SDS and the Student Afro-American Society led the occupation of campus buildings in protest of Harlem expansion. Hundreds participated in the protests spearheaded by Rudd, Harvey Blume, and other activist leaders. Meanwhile, students debated and eventually agreed upon a specific set of demands, knowing that salient policy change had come from past student demonstrations like UC Berkeley's 1964 Free Speech Movement.

In the aftermath of negative press and the culminating police bust, teachers and administrators collaborated with students to establish the University Senate, including a committee to oversee protest and disciplinary action. An African-American studies program was created as then-University President Grayson L. Kirk tried soothing fraught relations by increasing black admission, financial aid, and faculty membership.

But you'd never think that students in the 1960s accomplished anything tangible. Yes, people remember that coeds stood up for interracial solidarity while opposing war efforts and staid college curricula. But the New Left underestimated how provoking the Right would harm their legacy.

While conservatives built up their savvy playbook of think tanks and respectability politics, student activists looked like agitators. Rudd, in particular, was considered a national symbol of student revolt. Moreover, fracture between SDS' immediatists (many of whom joined the militant Weather Underground) and long-term strategists allowed the Right to capitalize on student dithering. The trenchant idea of "principled nonconformity" was repackaged as an inchoate commitment to broad liberal reforms. Conservatives sounded the death knell after violent melees like the Chicago Democratic National Convention and Days of Rage. Thus, from the 1970s onward, student activists have been perceived as recalcitrant bullies.

When I think about my reaction to the activist label, I realize that we've never fully recovered from this "discrediting of the left." In our increasingly categorized society, today's student activists are still devalued as Occupy-ers: insurrectionaries without concrete purpose. The media depicts hipster caricatures, or Black Lives Matter protesters shouting at politicians. Add to this list developing a social media hashtag, circulating an online petition, and debating people on the Internet. In the eyes of many, student activism remains synonymous with ineffective rebellion.

We need only look at the past week to see that these issues persist on our campus. Despite navigating conventional channels of policy change, members of Columbia Divest for Climate Justice have faced harsh criticism that they shouldn't demonstrate at Low Library. I've even heard them crudely branded as social justice warriors. This sort of blithe commentary obscures their arduous research, legislative writing, and coalition-building. Therein lies the activism catch-22: It doesn't matter whether your proposals come to fruition, engaging in intensely visceral activism relegates you to the standing of a rabble-rouser.

Unfortunately, I think too many of us have imbued that mindset of respectability. It manifests in griping when protesters interrupt lawn sunbathing to call a mic check. It means agreeing that Columbia protects rapists, but thinking shining the phrase in bright lights goes too far. Even privately supporting CDCJ but refusing to sleep on the Steps because it's too cold outside. Funny that—rejecting radical behavior yet celebrating its ensuing, intended policy objectives.

I wasn't able to cohere these feelings until I spoke with history professor Eric Foner. After one of his lectures on American radicalism, I asked him what he thought of contemporary student activism. Just as admirable as when I went to Columbia, he replied. Foner is right: Activists are fucking brave. Despite their marginalization, this pressure to yield to a majority that wants to feel more comfortable with radical demands, student approaches have not wavered. Marches, meetings, sit-ins, protests, petitions (online and in-person) go hand in hand with reforming policy. Not all of us have the zeal to stand up unashamedly and demand change. Nonetheless, this activist spirit has become a shortsighted reason for people to spurn movements and disregard their genuine appeals for progress. 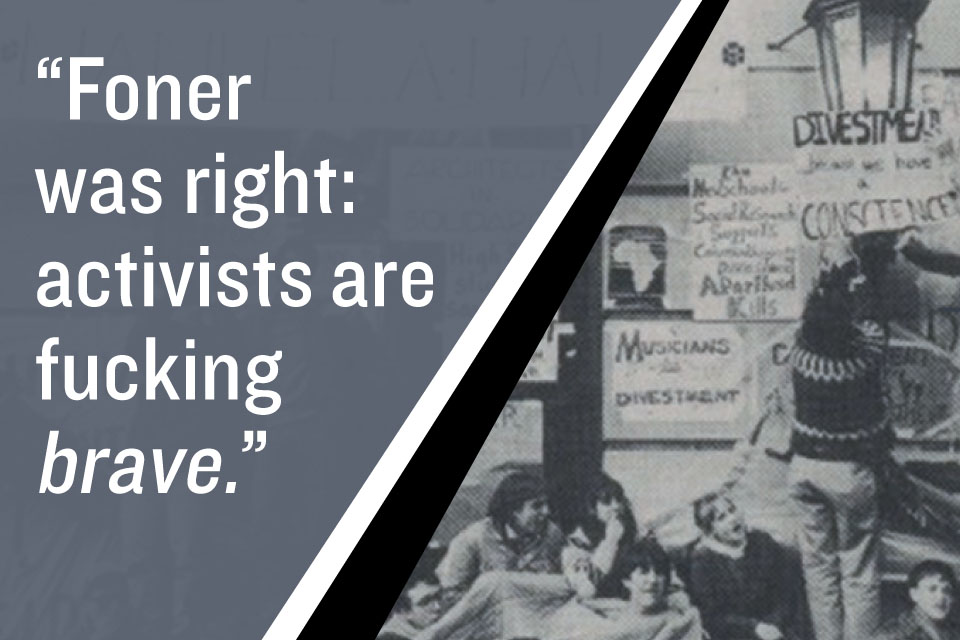 I'm certainly guilty of this attitude in the past. I've considered student activism to be amorphous and defanged. Indeed, we should view any political movement with healthy skepticism, but it is easy to memorialize the past while trivializing present-day activism. Back in the 1960s, coeds were denigrated for tactics that culturally transformed institutions of higher education. These radicals scrutinized the University's role in society at large—and, in doing so, carved out groundbreaking rights for students.

These methods have rightly been co-opted by today's campus activists. Activism can make us feel uncomfortable now as it did then, but that can also be one of its greatest strengths. It should compel us to think about demands rather than write them off. Proud and passionate dissent is deeply ingrained in Columbia's culture. Honoring that tradition behooves us to recognize the multifaceted nature of activism—protest and the policy—even when we're just sitting on the sidelines.

The author is a Columbia College junior majoring in history and concentrating in statistics. She is president of the Roosevelt Institute and a staffer for the University Senate. You can/should follow her @singareddynm for more irreverent criticisms.