What's there to fear about collective bargaining and unionization?

What's there to fear about collective bargaining and unionization? 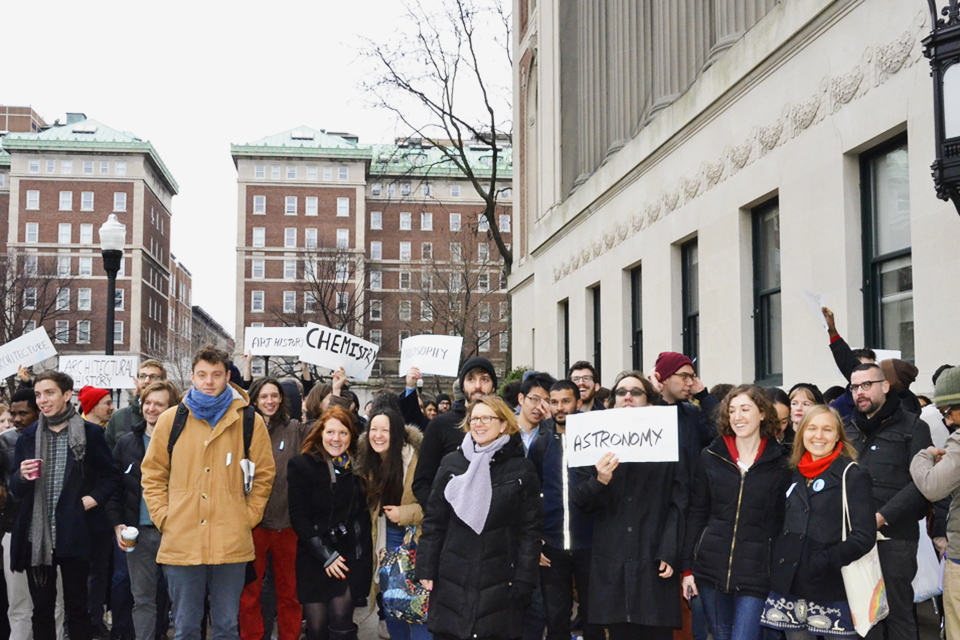 In the wake of this week's landmark National Labor Relations Board ruling, Columbia students received a perplexing email from University Provost John H. Coatsworth. In the letter, Coatsworth states that Columbia not only opposed collective bargaining rights for graduate workers during its long campaign against our unionization efforts, but also continues to do so despite the NLRB's conclusive ruling.

The provost's letter simply encourages graduate workers to eschew this newly regained right in our own purported best interests since Columbia has apparently "established a productive dialogue with the Graduate School Advisory Council and with other student organizations that has resulted in enhancements for Ph.D. as well as M.A. students." ??This is akin to management telling workers not to agitate for collective bargaining rights, because management will look to their interests. Unsurprisingly, workers have historically been suspicious of such assurances.

Whether Columbia's graduate students believe that their interests are best served by a union or not is a decision they will make in a few months when the election, the date of which will be announced by the NLRB, occurs. Maybe graduate workers will decide to be represented by United Auto Workers; perhaps they will decide to form an independent union; perhaps they'll choose an entirely different set of collective arrangements.

As a graduate student, I do not presume to tell my colleagues what is in their best interests. Instead, I work with the assumption that this decision will be democratically and individually made, and collectively, through a process of discussion, debate, and disagreement. That is, it will come through practical politics whereby workers fashion collective associations (which may or may not take the union form) that they believe will best serve their interests.

What is puzzling is that the provost's office deems it appropriate to instruct graduate students on what their interests precisely are and how they will be best served (by not unionizing, according to the provost). Regardless of University policy until now, the facts as they stand are that the NLRB has declared specious the arguments made by Columbia and other private universities, against collective bargaining rights for graduate workers in no uncertain terms:

"We are not persuaded by the Brown University Board's self-described 'fundamental belief that the imposition [sic] of collective bargaining on graduate students would improperly intrude into the educational process and would be inconsistent with the purposes and policies of the Act.'"

Not only did the NLRB see through the faulty logic employed in the legal arguments by the lawyers representing private Ivy League schools—graduate workers saw through it, too. Graduate workers do not need enlightenment from the provost's office or assurances from University administration on where our best interests lie, nor should the provost's office assume that there are automatic continuities and parallels between the interests of the administration and graduate workers.

The provost fears that instituting collective bargaining rights for graduate workers will unduly harm "the advisor-advisee relationships." In fact, a Cornell study indicates that the opposite is true.

It is a little strange to be told that we are actually in some medieval mode of apprenticeship, when it is plain to see the corporate logic of low-wage work by which institutions such as Columbia are run.

If the provost is truly alarmed at the prospect of the involvement of a "non-academic third party" in University affairs, we students would also like some explanation as to why various third-party corporate consulting firms manage the University's economic affairs. The third-party groups involved with the University don't stop there: What about Columbia's defense projects for the military and the government? And what about the military generals who are invited to give lectures here? While these third party groups aren't directly analogous to labor unions, it's important to remember that third parties are largely an accepted part of the University system.

It seems that it is only when workers build cross-institutional relationships and forms of representation that the provost begins to worry about third-party involvement.

As graduate workers, we are most certainly here to train and foster deep intellectual and comradely relationships with our teachers, advisors, and faculty mentors. The provost should know that while several faculty members may have expressed alarm at the prospect of unionized graduate workers, many more uphold our collective bargaining rights. We, too, earn a large part of our fellowships in the form of wages for which we teach, grade, design courses, and conduct research.

The NLRB ruling does not mean that all, or even a majority of, graduate students will necessarily decide that the socially specific form of labor is the ideal description of the work they do, best represented through a union. It does mean, however, that the option to unionize is now on the table. We do not expect the administration to welcome this ruling.

We do expect, however, that this decision will be left to graduate students without unfair pressure or veiled manipulation from the administration.

The author is a seventh-year doctoral candidate in the department of anthropology.