Genocide is not justice, and its advocates don't belong on our campus

Genocide is not justice, and its advocates don't belong on our campus 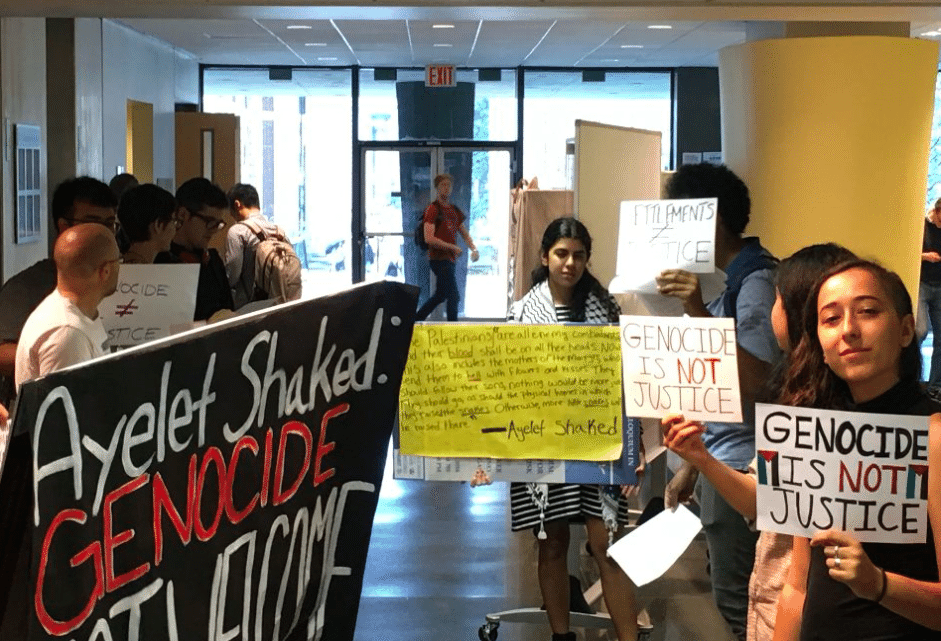 This past Monday, Israeli Minister of Justice Ayelet Shaked spoke at an official Columbia Law School luncheon organized by KOLEINU: Columbia Law Students for Israel. The luncheon was small, advertised through closed listservs, and exclusive to law students.

The secure and quiet introduction of the event seemed to indicate the doubts KOLEINU itself had about Shaked's tenure in the Israeli government, which has been built upon a record of racist, extremist, and vehemently pro-settlement stances.

In July 2014, Shaked posted a call for genocide on her Facebook. She shared a quote from Uri Elitzur, a late Israeli speech writer, that stated, as given in a translation by The Washington Post,

"[The Palestinians] are all enemy combatants, and their blood shall be on all their heads. Now this also includes the mothers of the martyrs, who send them to hell with flowers and kisses. They should follow their sons, nothing would be more just. They should go, as should the physical homes in which they raised the snakes. Otherwise, more little snakes will be raised there."

The Facebook post condemned the entire Palestinian people as the enemy of the Israeli state in their "war" for "freedom"—a war that does not differentiate between children and men, a war that warrants the destruction of an entire people, from the mothers that give them life, to the little children they raise.

While some can chalk the post up to her "personal opinion" or just an exercise of her right to "free speech," this is not just a random post from any individual. Ayelet Shaked is an incredibly popular elected official who became an incredibly powerful cabinet member. She currently holds a position of power at the top of the Israeli government, and is simultaneously advocating for the extermination of the Palestinian people who fall under her jurisdiction. The ideas that Shaked posts on Facebook are those which she brings into the Israeli government. And it is these dangerous, misinformed, unethical ideas that directly cause Palestinian people pain. These ideas do not deserve a platform.

Shaked does not just believe that all Palestinians are terrorists who must be destroyed, she actively seeks to ensure their separate and unequal treatment under law. Not only does she believe that Palestinian children are "little snakes," she disqualifies them from their status as minors, and potentially subjects them to the cruel, inhumane, and draconian treatment of others.

It's time that we, as Columbia students, reconsider to whom we give space, and why. Why was Shaked invited to speak in the first place? Why was she given the space to propagate her hatred and calls to genocide? College students, millennials, and conscious people at large are said to be suffering from a sickness of dogmatic political correctness that demands we be sheltered in spaces devoid of disagreement. Yet the requests of "politically correct" students and their objections against welcoming an Israeli government official who maintains that Palestinian people must be destroyed aren't about creating a sanitized world free of all offending material.

Instead, our objections are born of an understanding that Columbia, a university with an abundance of resources and influence, possesses moral and ethical responsibilities for the people and ideas to whom and to which we give space. When the individual who employs brutal, hateful rhetoric also writes the laws that shape Palestinians' daily realities, we must recognize how words perpetuate and reflect the daily violence Palestinians face.

There is only one thing that we should learn from these forays into ethical gray areas: We should not have to learn from bad people; we should learn in spite of them. Ayelet Shaked should not have been allowed to speak at Columbia. She should not have been invited in the first place. She is a direct threat to an entire people, some of whom live on this very campus, who learn on this campus, who know damn well that nothing she has to say contains enough academic value to erase the pain and destruction she causes them and their families.

The authors are members of Columbia Students for Justice in Palestine. Columbia SJP is currently co-leading a campaign with CU/BC Jewish Voice for Peace in support of the Palestinian call for boycotts, divestment, and sanctions against Israel.