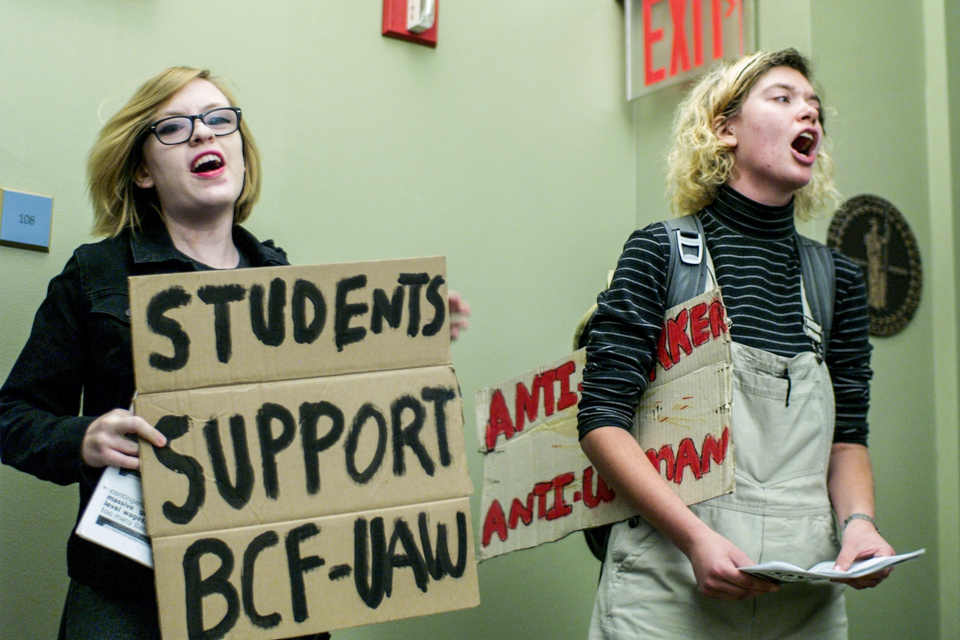 Like so many students at Barnard, we came here in part because we were excited about the idea of attending an institution that embraced, as its mission statement says, a "responsibility to address issues of gender in all of their complexity and urgency." Unfortunately, Barnard administrations past and present have consistently failed to live up to this responsibility when it comes to their own female workers.

Last week, Barnard office and dormitory workers celebrated the anniversary of their 1996 strike over administrative attempts to reduce their healthcare benefits. Judith Shapiro, a noted feminist anthropologist and Barnard's president at the time, seemed to think she knew what was better for these workers, who were overwhelmingly women of color, than they themselves did. As a result, the strike lasted six months. It took the incredible sacrifice of the workers on the picket line—workers who did not receive their pay and benefits—and the solidarity of Barnard students to force Shapiro to withdraw her demands. Eventually, she did, and Barnard was a more just institution because of it.

During the 1996 campaign, students had to demand that administrators "Practice What You Teach" and remind them of the fundamental feminist lesson that "Anti-Worker = Anti-Woman." This message was represented most spectacularly when it was painted on banners that dropped on Barnard and Lehman Halls when Shapiro rose to speak during the 1996 graduation ceremonies.

In 2016, we are seeing a repeat of the dynamics of 1996 in the contract campaign of the new Barnard Contingent Faculty Union, two-thirds of whom are women. Again a group of the most underpaid workers on campus (many make low wages and are denied any health or retirement benefits if they are adjunct faculty)—workers who are overwhelmingly women—are standing up for better working conditions. And again, an administration headed by a self-proclaimed feminist appears to be doing everything in its power to obstruct them.

Siobhan Burke, BC '08, an adjunct lecturer in Barnard's dance department and a member of the BCF-UAW bargaining committee, stated the following in the union's report on bargaining: "As a proud Barnard alum, I often can't believe I'm sitting across from representatives of the same institution that sought to 'empower' me as a young woman. The College has attempted to weaken and disempower us, starting with its hiring of a lawyer from one of the country's most infamously anti-union law firms. This approach is deeply at odds with the progressive values that have drawn so many students (myself included) to Barnard, and to watch it unfold has been disillusioning."

The firm Professor Burke mentioned, Jackson Lewis, was hired by the administration to handle contract negotiations since they began last fall. Jackson Lewis has been at the forefront of several nasty anti-union campaigns and has encouraged employers to "treat union organizers like a contagious disease." In the past, Jackson Lewis has been sued for malpractice and for advising an employer to partake in illegal activities to get rid of a union.

It appears that the Liberal Arts College for Women in New York City has practically sunk to the level of Walmart and other vehemently anti-union, low-wage employers. It is, thus, incumbent again upon Barnard students and Barnard alumni to push the administration to remain true to the College's feminist values. As a part of this, last Tuesday, Student-Worker Solidarity delivered a petition signed by more than 800 alumni who support the union, calling on the administration to negotiate in good faith and improve the working conditions of the contingent faculty.

While President Spar can lament in an op-ed for the New York Times about how the women in her "liberal, feminist-leaning, highly educated peer group" feel about cosmetic surgery and aging, many of the women who teach at Barnard don't even have health or retirement benefits. How are Barnard students who are interested in pursuing careers in academia supposed to feel when their own administration treats their professors and mentors this way? How are Barnard students from working-class backgrounds supposed to feel when their school administration is deploying the same anti-union tactics that members of their families and communities have faced?

If Barnard College actually wants to empower women—and we don't just mean Debora Spar's friends on the Upper East Side—the administration must negotiate in good faith and take concrete action to improve the working conditions of the contingent faculty. Rather than hiding behind a hostile firm like Jackson Lewis, perhaps President Spar could meet with the unionized professors or offer a comprehensive written response to their concerns. The administration can release as many well-crafted public statements as they want, but their words are absolutely meaningless if real progress is not made in the form of improved wages, benefits, and job security.

Until that happens, Barnard students must take the lead in teaching the Barnard administration, yet again, the crucial feminist lesson that "Anti-Worker = Anti-Woman."

The authors are Barnard College students and members of Student-Worker Solidarity.