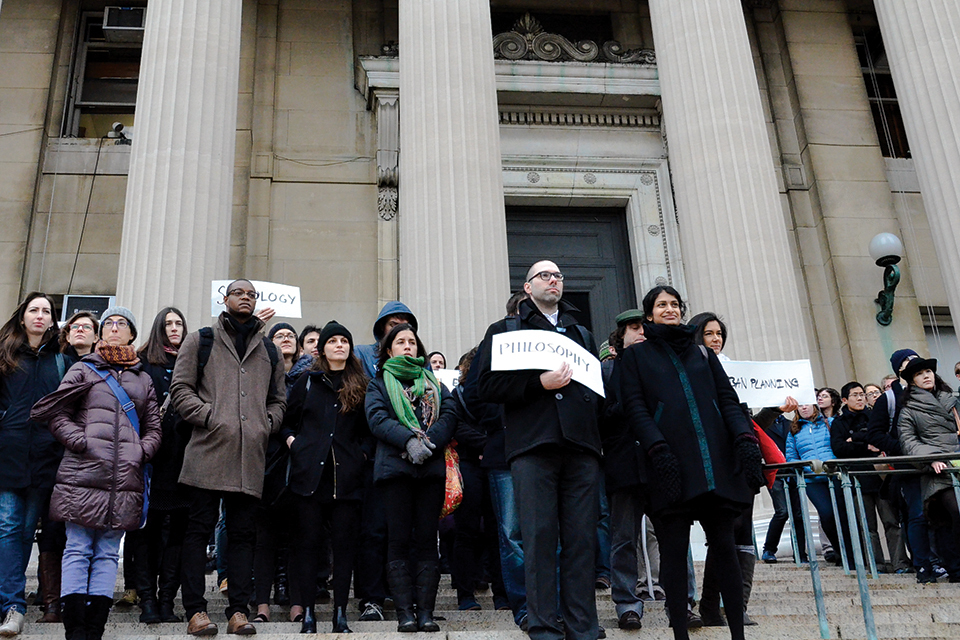 In August 2015, I spent hours on the phone with the Internal Revenue Service trying to track my tax refund. For all international graduate students, Columbia is required to deduct a standard 14 percent of their stipends before disbursal. As an Indian citizen, because of a country-specific treaty, I am entitled to a refund of approximately half that amount. At the time, this refund was months overdue; I had been counting on that money to cover living costs until our fall stipends were issued.

But my efforts proved futile. I had no idea when I would receive the money or, in fact, whether I'd receive it at all.

A few weeks later, I received a letter from the IRS informing me that it would take an additional 180 days to process my return. In February 2016, I received a bill from the IRS for $1,704 because of a "discrepancy" between the information supplied by me and that supplied by my "withholding agent." The reported income declared as withheld was $0 instead of $3,306—the standard 14 percent of my stipend. I was required, therefore, to pay the difference between this missing $3,306 and the amount of money I was due to be refunded—$1,672. It was due in less than a month, on March 14, 2016.

It's hard to explain what looking at that bill felt like. As an international graduate student, my position at Columbia already feels precarious; the enormity of that bill and its imminent deadline only compounded this feeling of helplessness.

I initially assumed that I had made an error of gigantic proportions while filing my returns. After all, U.S. taxes are notoriously difficult to figure out and, when you add to that the complications of country-specific treaties and the stresses of the semester, there was a definite chance that I had, in my sleep-deprived state, messed up. I only realized that this was a systemic issue after the Graduate Workers of Columbia (GWC) called an emergency meeting. The majority of Columbia's international graduate students had not received their refunds. Moreover, a substantial number of them had been billed by the IRS in addition to this loss. These bills ranged from hundreds of dollars to over three thousand, and they were all due in a matter of weeks.

At this meeting, I realized that a number of people shared my first reaction—they believed it had been their personal error that had resulted in this situation. A number had reached out to the International Students and Scholars Office (ISSO), where the standard response has always been that they are legally unable to advise us on taxes. Others had reached out to HR and received different responses, and a few had even employed accountants to take care of it. So, instead of focusing on TA-ing, teaching, or writing our dissertations, international graduate students were all focused on dealing with this looming deadline.

I finally received my refund this summer along with interest. It turned out that this wasn't an issue exclusive to Columbia; it had affected international graduate students at universities across the country, including the University of Chicago, Cornell University,  and the University of Connecticut. The IRS subsequently stated that these discrepancies were due to a problem with their processing systems.

Ultimately, Columbia's administration sent a letter to the IRS urging them to address the issue, and Human Resources provided information and resources to graduate students via Courseworks and partial loans to each student who had been affected. But this administrative action was largely a consequence of the efforts of the GWC.

Unlike American nationals, us international graduate students start off every year at Columbia with 14 percent of our incomes withheld. Our savings, if we have any, are often in currencies severely devalued in comparison to the dollar, and we violate the terms of our visa if we seek employment off-campus. We are often ineligible for external fellowships and grants because of our citizenship status. A lot of us don't have a support system—family or friends—within the country to turn to for financial or emotional help, and I know a number of us are worried about how the events of the past year will affect our future status as workers in this country.

I fully understand that University administration does not have the power to make these obstacles disappear. However, an awareness of these obstacles and a sensitivity toward these difficulties would go a very long way.

Over the past two years, the GWC has been extremely active in addressing the concerns of international graduate students by holding workshops, organizing meetings, and bringing the very particular issues raised by us to the attention of the administration.  While the GWC has had successes in petitioning for international graduate students, this doesn't negate the need for official recognition. Official recognition would allow the union to negotiate on our behalf with the administration. Collective bargaining, the main goal of the union, would ensure that our voices be heard and that we wouldn't have to resort to hoping that our repeated emails, petitions, and phone calls compel the administration to respond.

The recent NLRB ruling that recognizes the right of graduate students to unionize will soon lead to a vote at Columbia. I'll admit that I was ambivalent about the union when I first learned about the movement two years ago. I wasn't sure whether it would have a discernable effect on my life and working conditions as a graduate student. But the past year has shown me the value of collective action and the support that the union will provide to international students like me. In the upcoming referendum, therefore, I will be voting in favor of unionizing because of the quantifiable effect the GWC has already had on improving the quality of my life here at Columbia.

The author is a fourth-year graduate student in the Department of English and Comparative Literature, GSAS. She is currently studying the translation and adaptation of Shakespeare in contemporary India and is a University Writing instructor.