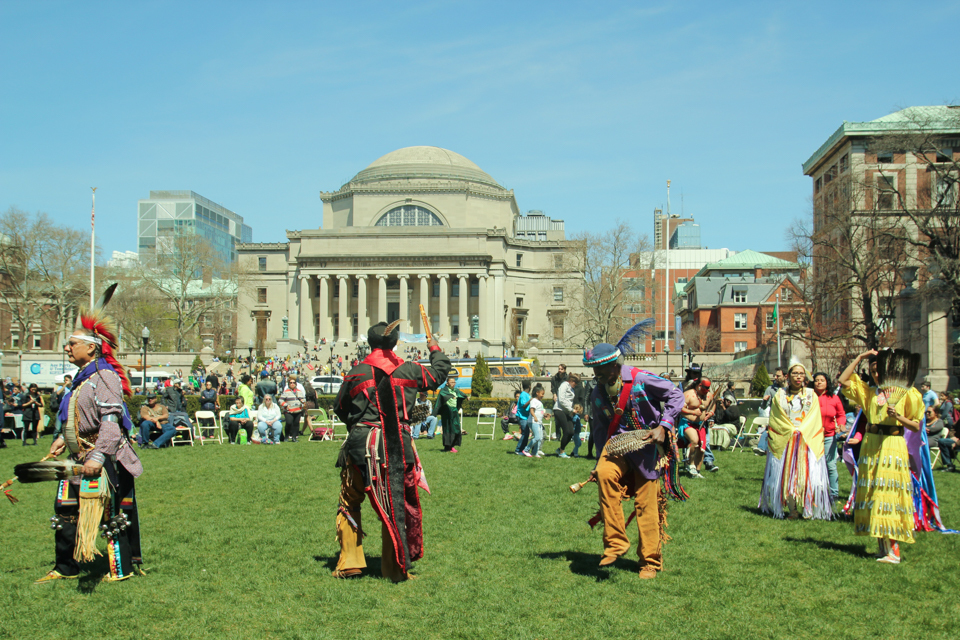 A history can always be forgotten, or worse yet, tainted by the desire to defend a legacy.

A history can be made to be so quiet that it is as silent as a statue or a brick in a building.

In honor of Indigenous People's Day as well as the unveiling of the Lenape plaque this evening, here is an example of an ugly history of our University that should no longer lay hidden in plain sight.

In Remington Arms, An American History, Alden Hatch writes about Nelson Story, an opportunistic settler who "struck it rich in Virginia City [then rode] fifteen hundred miles to Texas and invested thirty thousand dollars in a herd of three thousand longhorn cattle. He had recruited a band of Texas cowboys—ex-Confederate Cavalrymen—to handle them " This business called for them to travel to Wyoming, and when Story arrived, he must have felt excited about the profit that lay before him.

It's not hard to understand why Story might have gotten a little nervous when he stopped at Fort Leavenworth. The news he received there wasn't promising: Hostilities between Natives and settlers were simmering as the latter invaded deeper and deeper into new territories, building forts, killing buffalo, and seizing land. So, during his stay at the fort, Story took the opportunity to purchase "thirty brand-new Remington rifles, together with some thousands of brass center-fire cartridges. It must have been almost the first shipment [of Remington Arms] to reach the West."

The results were catastrophic.

When an unknown group of "hostile Indians" attacked the American invaders, they faced weapons far more destructive than anything they had ever seen. They attempted to circle Story and his ex-Confederate partners, "shooting arrows and muskets at full gallop, waiting as was their tactic, for the slackening of fire that meant the Americans were reloading but that moment never came." The "Sioux" (Hatch doesn't bother to specify) attempted to pull back a safe distance from the guns, but it didn't matter—the new Remingtons could fire at a longer range. At the end of the day, Story and his men had inflicted mass casualties, while not suffering a single loss themselves.

Simply put, Remington Arms was good at making guns. They were good at providing wealth-driven settlers with the tools for destroying Native civilizations. At a time in history when wars were pretext for genocide and massacres were disguised as battles, Remington Arms made a fortune off all the bloodshed—specifically, Native bloodshed.

While Remington Arms was amassing a monumental fortune, another corporation was doing the same. Phelps Dodge, a company that built its initial success by exporting cotton from the deep south to Liverpool, England, was bouncing back from the Panic of 1837. The company experienced major windfalls when it started importing tin, iron, and copper, due to "pioneers"' needs for products designed to endure the hardships of the frontier (i.e. "kettles, lamps, rivets, buttons, and other metal items"). Meanwhile, the company was also preparing to take over copper mining in the American Southwest, an enterprise that would attract a massive influx of settlers to the region. The chaos this triggered would result in horrific wars and many hidden massacres.

Usually, we view these histories as occurring in a different time and therefore a separate world. We tell ourselves that these things happened over there back then. But the Columbia campus, the buildings you learn inside every day, has a direct connection to these histories. This school that we call home—the school descendants of slaves and "hostile Indians" call home—profited tremendously from the these events. And in some ways, so do we.

Remington Arms was owned by Marcellus Hartley. Phelps Dodge was founded by Anson Greene Phelps and his son-in-law William E. Dodge. The two families, the Hartleys and the Dodges, married into one another and provided the funds for a good portion of the buildings on our main campus: 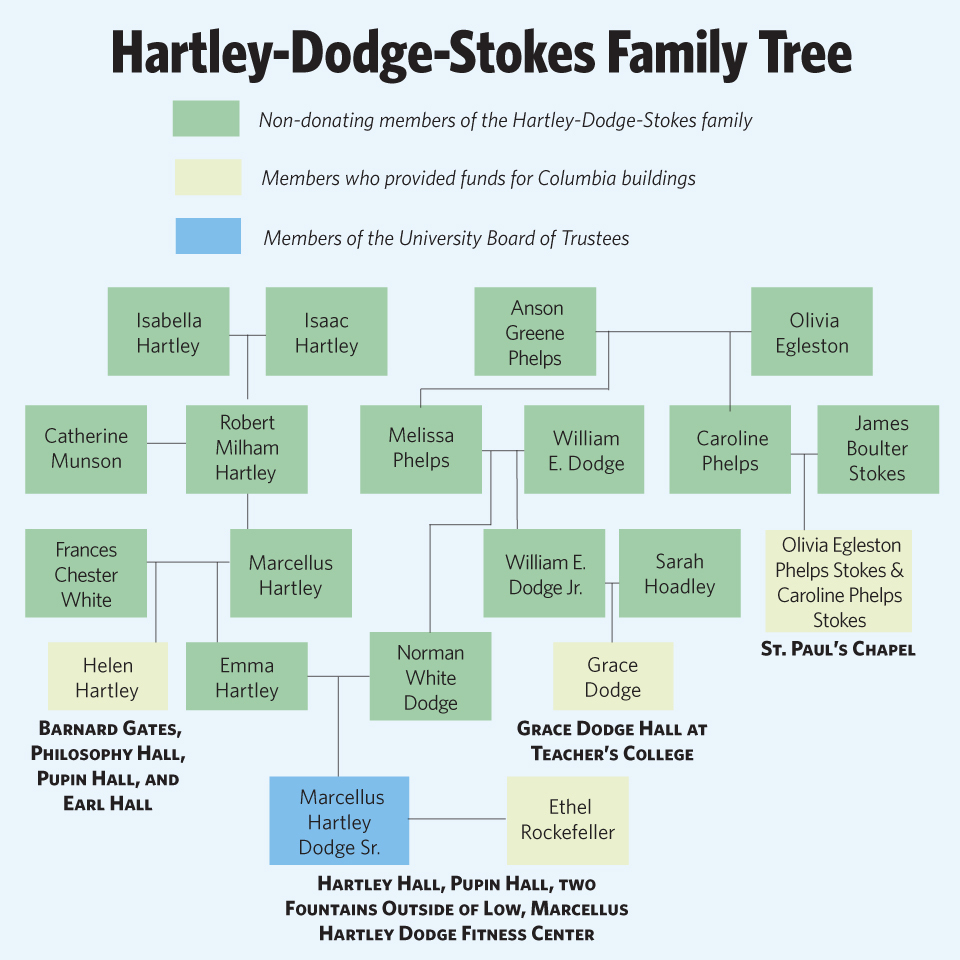 Dodge Hall was named such in honor of Marcellus Hartley Dodge Sr., who was by then regarded as one of Columbia's most generous donors.

Marcellus Hartley's daughter and Dodge Senior's aunt, Helen Hartley, donated the funds for Philosophy Hall and was a major contributor to the construction of Pupin and Earl Hall. Earl Hall is named after nephew Dodge Senior's paternal grandfather, William E. Dodge, a man somehow capable of managing to see slavery as an evil while simultaneously profiting tremendously from its existence.

Helen, her daughter Grace, and Marcellus Hartley Dodge Sr., all heirs of the Remington fortune, also provided the funds for the Barnard Gates.

St. Paul's Chapel was donated by Caroline Phelps-Stokes and her sister in honor of their father, James Boulter Stokes, the third co-founder of Phelps Dodge and another man that married into the Phelps family. Grace Dodge, a philanthropist and the granddaughter of William E. Dodge, essentially founded Teacher's College.

It is imperative that we as students inform our University that we do not condone these donations. We shouldn't want to sleep in dormitories named after men who made guns that could kill Natives more easily, nor should we want to pray in places whose construction was made possible by the profits of chattel slavery. In short, there is only one solution to fulfill the material debt this university holds to Black and Indigenous peoples: Formally denounce the money that was given to the University by the Hartley Dodge family, and repay the communities wronged in the form of funding, admission policies, building name changes, faculty additions, and other means of restitution.

Philanthropy should never be used to justify racism and cruelty, nor should we perpetually honor oppressive figures for building their wealth upon the genocide of Black and Native peoples. It is simply below the dignity of such a prestigious university to accept these histories without critically thinking about the ethical standards of the source from which it came. It is beneath us.

If our trustees, deans, faculty, and students choose to continue ignoring this history we have unsilenced, make no mistake, they will send the message that they condone the means by which Columbia acquired these funds. There is no middle ground here. The Columbia board of trustees need to calculate the total funds the University has received from the Hartley Dodge family and somehow redirect it to the communities that have been wronged. Students, meanwhile, cannot continue to walk this campus while ignoring the plaques attached to buildings which, instead of honoring the people that first inhabited this land, honor the profits our University has made from colonization and enslavement.

The only other option is to choose to remain silent about a history that, quite literally, has all of us surrounded.

Noah Ramage is a Columbia College senior studying history. He is currently one of the political chairs for the Native American Council, and is writing in commemoration of Indigenous Peoples' Day and the installation of the Lenape plaque on Columbia's Morningside Heights campus.