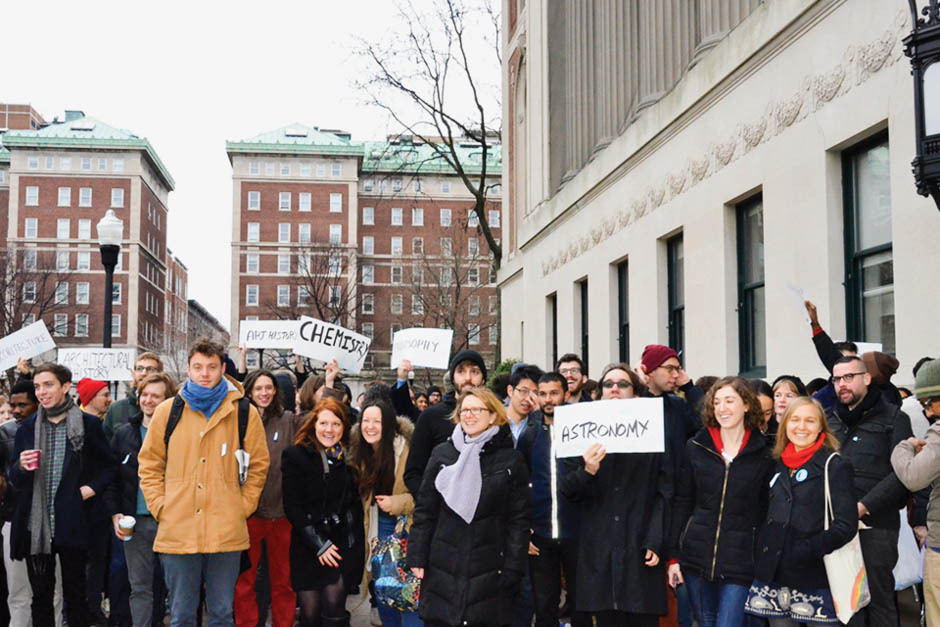 It's hard to know how much money Columbia has already paid to the law firm of Proskauer Rose during its years of struggle against the graduate student effort to form a union, and how much it is still paying. Reliable figures are hard to come by on subjects like this one, but popular estimates run from several million to tens of millions of dollars.

Every time I think back to the moments when the administration told my department that there are no "new lines" (that is, permission to hire new faculty members) in such-and-such a field, that retiring faculty members may not be replaced, that things are tight, I think of all that money, the hard-earned result of so much fundraising, and all of it going—for what?

To stop the young people who do so much of our teaching and research from having any say in their working conditions. But why would we want to spend money on that?

Proskauer Rose is widely referred to as a union-busting firm. Such firms seem pretty good at advertising their services while somehow also keeping a low profile. Common sense being what it is, the busting of unions is not something with which you want to be associated. According to Art Levine, who went undercover at a $1,500 per head union-busting seminar in Las Vegas led by Jackson Lewis attorneys, the name Jackson Lewis didn't even appear on the sign outside the door.

The client list of any given union-busting firm is also hard to come by, but the names of the companies that shell out for them do eventually become known. Alongside many university administrations, these names include Cablevision, Pfizer, IBM, Volkswagen (now infamous for its dishonesty), and Walmart. Unfortunately, it seems that the Columbia administration's recent memo to faculty follows rather closely Walmart's advice to its managers about how to fight unionization.

What are nonprofits like us doing in the same company as these for-profit corporations?

Corporate ruthlessness about employee wages and benefits is ugly, but at least it makes sense in terms of corporate principles, questionable as those principles may be. Universities should have higher principles, no? They are exempted from taxation because they are supposed to be operating in the public interest. How is it in the public interest to make sure that the people who do the University's essential work have no one to support their interests and grievances and must depend instead on the hypothetical good will of their employers?

Many of us faculty members have been wondering lately what it is exactly that administrators, whose numbers seem to increase a lot faster than ours, get paid to do. An upper-level Columbia administrator visited my department recently to explain the administration's position on the union drive. The students, as I remember him saying, were claiming that their dental coverage had been arbitrarily revoked. This, he said, was untrue. In fact, he said, it was the insurance company that had cancelled the policy, not the University. The University had promptly replaced that policy. Perhaps, he conceded, the administrator in charge (not himself) had not advertised the replacement widely or rapidly enough.

An email to a graduate student clarified this problem somewhat. The new coverage, according to the email, included one routine visit and one cleaning per year, pain relief and advice in case of a dental emergency, a $20 copay, and a 10 percent discount on other fees. Comprehensive coverage had disappeared as an option, even an expensive one. Our conversation seemed to indicate that the new policy was saving the University money, and that it was clear whose pockets that money was coming out of. How many graduate students are not living under or around the poverty line?

In its memos regarding graduate worker unionization, the University administration all but complained that allowing a union in a private university would plunge us all into a terrifying new world of uncertainty. In fact, uncertainty is what graduate students are already living with. They had no say at all in whether or not they would have comprehensive dental coverage. The administration decided arbitrarily whatever it liked, whenever it liked, with no input from anyone else.

Here are some answers, then, to the question of what University administrators do. They try to recruit faculty members into their anti-union drive (why else are they visiting so many departments?) And they… spin. Smoothly. Technically, no lies were told to my department. The substance of the issue had been, I think, misrepresented. But nothing was said, I would guess, that would be actionable in a court of law. The administration has likely been receiving high-quality advice from its very expensive counsel.

The putative ill effects of a graduate student union have been mentioned often, and each time they have been soundly refuted. I have been told, for example, that the mentor-mentee relation would be endangered by the existence of a union. That was not my experience, though admittedly, this was at a public institution.

Nothing the administration tells me to fear seems any more plausible than its account of the dental coverage replacement issue. What I do have to fear is every new step it takes that makes Columbia more like Walmart.