How we talk about Manhattanville matters

How we talk about Manhattanville matters 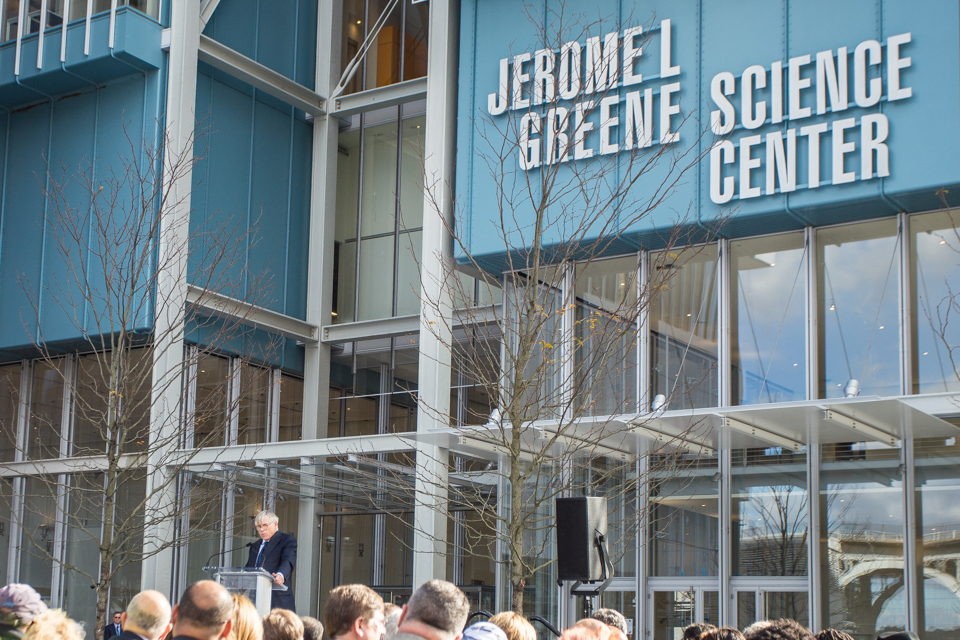 Last week, Columbia dedicated its new Manhattanville campus, a $6.3 billion, 17-acre addition 10 blocks north of its Morningside location. In a press release about the ceremony, University President Lee Bollinger tells his version of the history of the expansion.

"When we committed ourselves to the Manhattanville campus in West Harlem, we knew it would be essential for Columbia to use this opportunity to build exceptional spaces for our mission of teaching, research, and creativity that make a difference in the world, and to do so in a way that benefits our city and community," he said.

This statement, along with many others on Columbia's Manhattanville website and in Bollinger's speech at the dedication, ignores the process that led up to construction on the new campus. It is rhetoric that asks us to forget the truth—that local residents had to fight for years, through protests and lawsuits, to win any benefits at all from a project that displaced people from their homes and businesses.

Columbia began the expansion process in 2003 and was met with opposition from community members, local-level government, students, and faculty. In 2007, the local community board worked with city planning experts and community members to complete an alternate plan for developing the area, which was unanimously approved. It included goals like increasing light industry, creating affordable housing, and banning eminent domain, a practice which allows private entities to seize "blighted" public land for the public good. Columbia's plan, by contrast, gave it control over the full 17-acre site.

Then, in 2008, Columbia seized the land for the expansion through the use of eminent domain. The decision was reversed the following year when local business owners who refused to leave their places of work sued Columbia. As part of the decision, the appellate court pointed out that Columbia owned many of the buildings deemed blighted by the study, noting that the University could itself be responsible for the blighted conditions. But the New York Court of Appeals restored the eminent domain decision in 2010. The City Council approved both Columbia's plan and the community's plan, but community plans do not have the force of law in New York City. After the eminent domain decision, Columbia's plan did. Despite continued protests, construction on the expansion began.

In the midst of community pushback, Columbia was persuaded in 2008-2009 to negotiate a Community Benefits Agreement, which has had questionable results. Because it was negotiated in the context of Columbia fighting the community to carry out its unilateral plan for the area, the CBA does not represent an effort on the University's part to welcome the community into the planning process.

The process of gentrification and displacement predicted by protesters is clearly visible in the blocks near the new campus. On Broadway between 124th Street and 125th Street, several bodegas and a laundromat have closed their doors in the past few years and have been replaced by trendy restaurants. A Starbucks is moving into a storefront that has been vacant for years, after landlords refused to rent to a local health food store. Nearby, at a housing development that was once state affordable housing, longtime residents say that they have been harassed into leaving by landlords who want to renovate their apartments, increase rents, and attract students.

Yet when Columbia talks about the new campus, it's as though the community was always its first priority. "Reflecting the University's values, this new urban campus is designed to have no barriers, either between academic disciplines or between Columbia and the West Harlem community," the press release about the dedication ceremony reads.

But realistically speaking, it wasn't the University's values that encouraged it to represent itself this way. It was the years of community pushback it has had to deal with.

More importantly, barriers can be perceived by different people in different ways, and regardless of architecture, residents of the Grant and Manhattanville Houses—two public housing developments across the street from the new campus—will not likely forget the heightened policing they were subjected to in the years leading up to the opening. It hardly seems fair for Columbia to proclaim that it wants to break down barriers with the surrounding community after, in 2014, it praised the NYPD for arresting over 100 young residents of the Grant and Manhattanville Houses, in what was then the city's largest ever police raid. A Public Safety email went out to students the day after the raids informing us that it would "make our city and community safer." Columbia cannot both welcome the community and criminalize it at the same time.

In his speech at the dedication, Bollinger said directly that he hopes Manhattanville's history will be forgotten. "Within a mere six years, there will be some 6,000 Columbia faculty, students, and staff inhabiting this now somewhat ghostly site, all busily going about their lives and taking for granted what it took so many some fourteen years to create—which is exactly as it should be," he said.

Bollinger's daydream about the future makes sense. It would be convenient for Columbia if everyone forgot about its ghosts. But students and faculty who don't remember this history won't be able to participate in the kind of community engagement Bollinger says the new campus is founded on; we won't be able to talk to our community if we don't understand our role within it.

If Columbia wants community partnership to be more than an architectural metaphor, it needs to work towards an opposite future, one in which students and faculty recognize what we have gained at the community's expense. Columbia can't go back, but it can recognize the true history of Manhattanville.

The author is a Barnard College senior majoring in environmental science. She was the city news editor for Spectator's 139th volume.