Letter to the editor: A call for fair reporting

Letter to the editor: A call for fair reporting 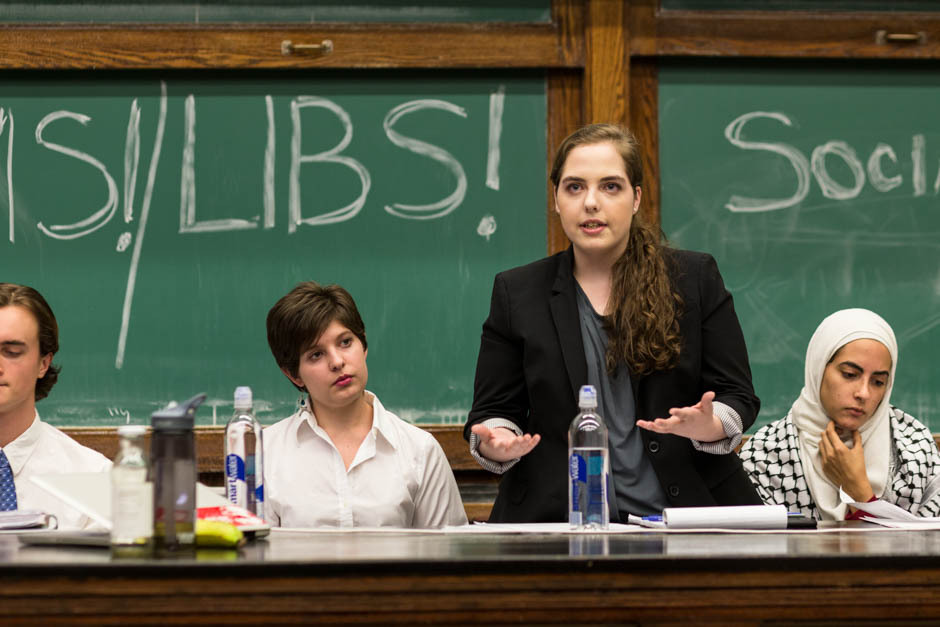 The Columbia University Libertarians are writing in response to the Columbia Daily Spectator article entitled "Ahead of election, student political groups forge different approaches." The article, published on Nov. 2, sought to provide coverage on the Nov. 1 Columbia Political Union-hosted debate, which featured speakers from four different campus political parties: the Columbia University Democrats, Columbia University College Republicans, Columbia University Libertarians, and Barnard Columbia Socialists. This inclusion of such a wide range of political ideologies was unprecedented, yet when reading the article, one would think the debate consisted of only two parties. The Libertarians were never mentioned, and the Barnard Columbia Socialists, the very group whose initial interest in such a debate resulted in its occasion, were mentioned merely once. At least the picture included in the article proves our representatives were, in fact, present.

We do not seek to complain for the sake of complaining. No, the reporting in the aforementioned article is indicative of a much more important issue. The fact of the matter is that Columbia, like most other large universities, is an incredibly unwelcoming place for diversity of thought. It's why, as the article suggests, the Republican speakers were consistently interrupted with audience remarks and reactions designed to ridicule their entire ideology. It's why posters for a Christina Hoff Sommers event about trigger warnings and safe spaces were torn down. It's why similarly charged political zingers in favor of a certain party are spoken in classrooms.

To disagree with anyone—Democrat, Republican, Libertarian, Socialist, etc.—is a fundamental right; we not only support those who do challenge our ideas, but actively encourage them. Discourse is a powerful intellectual tool.

But when discourse completely overlooks beliefs other than one's own, it becomes propaganda. We rely on journalistic publications such as the Columbia Daily Spectator to occupy a neutral position and to foster constructive dialogue. Yet, when they fail to do so, by ignoring the presence of two parties in the debate, they become complicit in the toxic culture and rhetoric that silences the ideological other.

The first article in four years published in the Columbia Daily Spectator that does feature the Columbia Libertarians refers to us in the headline as "party crashers." Which party, exactly, were we not invited to? The Libertarians have occupied a place on campus for nearly 15 years; if there is a party that we were not invited to, it is because you, Columbia University, did not care to extend the invitation.

Our words are not meant to condemn Spectator, but rather to illuminate how pervasive Columbia's lack of ideological diversity truly is. We must hold our journalists and our community accountable for the role they play in fostering the environment in which we all exist, particularly in an election year.

We will end our letter by illuminating the following paradox. Hillary Clinton's "Trump Effect," was referenced a few times at the debate by those condemning Trump supporters for being hate-mongering individuals who suppress ideologies other than their own. Yet we ask you, Columbia, how are you any different? You do not act physically, yet you muffle. In attempting to present an official record, journalists shoulder the responsibility of recognizing different opinions. When journalistic institutions fail to accurately report on the parties involved, they render differing opinions irrelevant, inconvenient truths. We are neither new nor irrelevant, and we call upon Spectator and the entire Columbia community to legitimize all opinions equally.

Do not worry—next time there's a party, we will be sure to attend. Consider this letter our RSVP.

The Columbia University Libertarians is a political group on campus with members from all Columbia-affiliated undergraduate schools. Members hold a wide range of thoughts on today's core issues, and seek to expand upon these opinions as they apply to our modern world. Paulina Mangubat, BC '17 and Spectator's editorial page editor, recused herself from editing this letter due to her involvement in planning and moderating "The Last Word: A Debate and Discussion Among Four Parties."