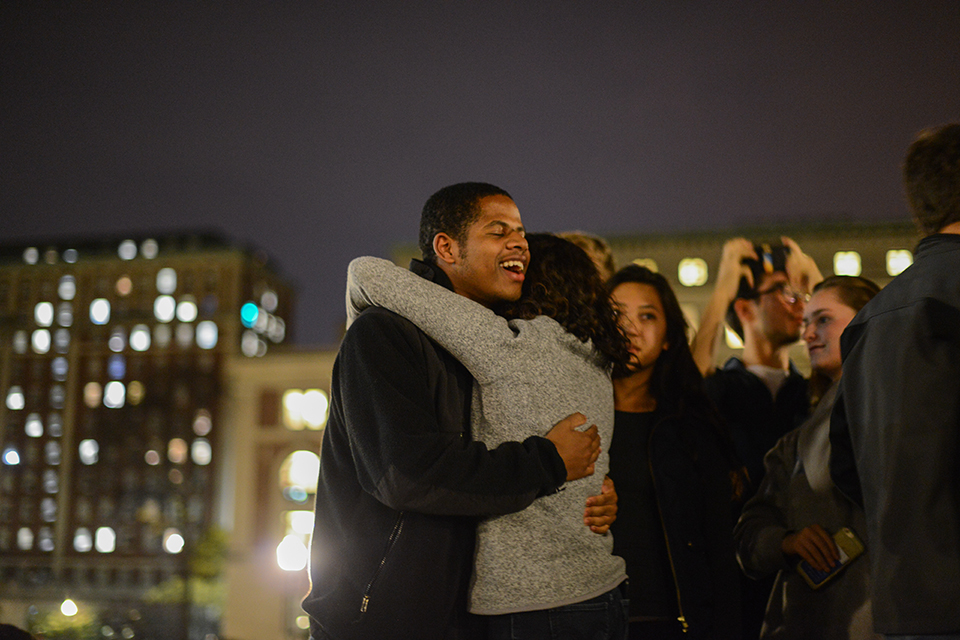 Much like the majority of the Columbia community, we, as Columbia students, woke up this morning in a heavy state of shock and sadness. Campus was eerily quiet, and most people's eyes were bloodshot from lack of sleep, crying, or both. It's fair to say that last night's victory came as a huge surprise to most of us—and not just because we tend to exist in our liberal millennial echo chambers. For most pundits, pollsters, and politicians, the prospect of a Trump presidency wasn't one to fear.

In a strange turn of events, an election that is and will remain unforgettable has ended, and American voters chose Donald Trump. For many people of color, individuals with physical and mental disabilities, LGBTQ folks, veterans, and women, this election result is terrifying and heartbreaking. Many are in states of grief, shock, and worry. There are many unanswered questions, and the pain that many of our loved ones are going through is real and upsetting.

Electoral results like these can and will try our strength, unity, and ability to move forward as a country. Often, after an election, the boil of political fervor lowers to a complacent simmer. We, as a generation, must refuse to let this happen. As young progressives, we have a lot of questions to ask ourselves and each other about what these next four years are going to look like. And while many have pointed to protests and activism as key modes of resistance, we, as members of the executive board of the Roosevelt Institute at Columbia University, urge that there's another half of the battle: policymaking.

Although a lot less glamorous and potentially less appetizing to Columbia students who caught the campaign bug, some of the most important progress that we can make as a country (and one of the key ways in which we can resist a Trump agenda) is to engage in the policymaking process at the local, state, and federal levels. This means lobbying your elected officials, making calls, writing letters, researching the issues, and, of course, voting in every local, state, and federal election in which you are able. This means understanding that, even in the wake of a devastating electoral loss, we millennials cannot afford to cede the political to the forces of racism, misogyny, homophobia, xenophobia, nativism, and fascism, forces that threaten to undermine the foundations of this Republic.

It's true that much of the progress we have made in the past eight years will be rolled back. Namely, actions on climate change, health care, same sex marriage, and financial regulation. But, if we're to save any of it in the years to come, this means rebuilding progressivism from the ground up. It means understanding why we, as progressive millennials, lost this election, and it means crafting and enacting policies that will address the concerns of the white voters in the Midwest, Pennsylvania, and Florida, many of whom voted for President Obama only four years ago.

This means retooling the discourse we use to communicate with our own base and ensuring that everyone feels motivated to turn out to the polls. And, of course, this means expanding the scope of our political engagements. Too many state legislatures and governorships are controlled by the GOP. Too many senate races and house district races have dismal voter turnout. If we're serious about protecting progressivism in the United States, it's clear that we need to work harder than ever to make sure that we are well equipped to mount successful political challenges and craft effective policies.

Our generation is vastly different from those of our parents and of their parents. Millennials—the age demographic that makes up the majority of Columbia's undergraduate community—are the most diverse, empathetic, educated, and compassionate generation. Symbolic of the country's evolving demographic landscape, millennials are a minority majority population, meaning that minorities make up a majority of our population. According to a pre-election survey, if only our vote had counted, Americans would have strongly favored Clinton. We, as a political bloc, have the power to forge a future that we want to inhabit.

All the work that we do and all that we stand for matter more than ever from this day forward. We will be the next generation of changemakers and rule-writers, so let how you feel right now propel you forward to do something positive even when the odds seem stacked against you. Or, in the words of Secretary Hillary Clinton, "never stop believing that fighting for what's right is worth it. It's always worth it."