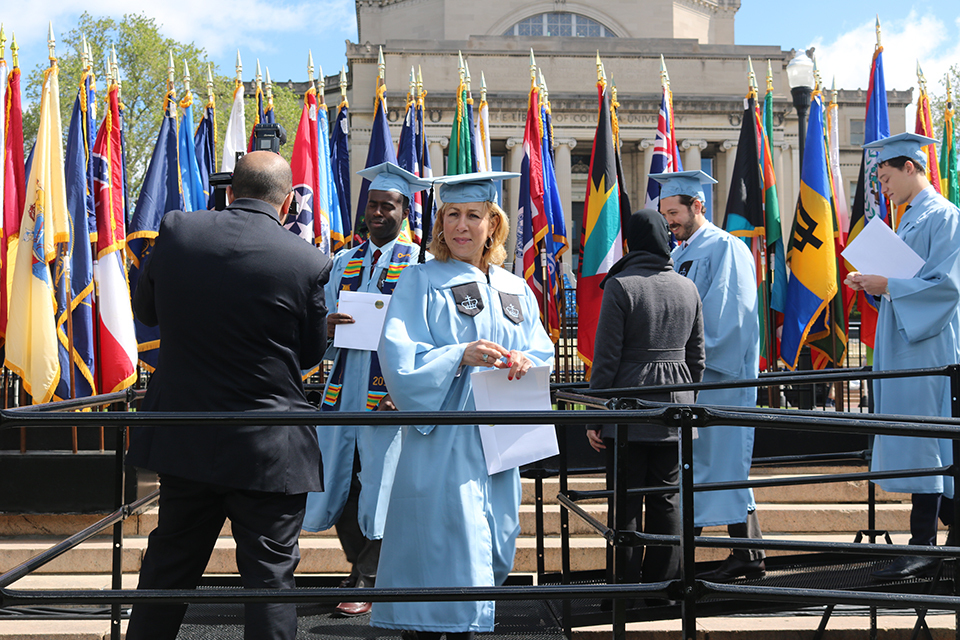 When speaking of goals, Michelangelo once said, "The greater danger for most of us lies not in setting our aim too high and falling short; but in setting our aim too low, and achieving our mark." While I have never been someone to shy away from high goals, my socioeconomic status and other related factors kept the idea of being a Columbia student from ever crossing my mind, despite being a native New Yorker.

Nevertheless, in March 2015, I attended the Beyond the Bars Conference with my teenage son—it was my first time visiting Columbia. I had tried to convince my son to apply to the school, but he brushed me off, pointing out that he was not in the top three percent of his class and, therefore, would never get in. I continued relentlessly to try to convince him, but he was reluctant.

During the Fall 2015 orientation ceremony, GS Dean of Students Tom Harford asked the incoming class to share our stories for Giving Day by posting videos and answering the question, "How is GS going to change your lives, and more importantly, how are you going to change Columbia and the world?" In reply to his request, I posted a short video in which I nervously conveyed the message that people shouldn't limit themselves. When I posted the video—although I had already started working at the Center for Justice and had had conversations with Dean Harford and other administrators about starting a student group—I had no idea how much my Columbia community would inspire me to help change the lives of people who have been impacted by mass incarceration.

Mass incarceration is a phenomenon plaguing the United States. We have seen the staggering statistics time and time again—the U.S. encompasses only five percent of the world's population, but we have over 25 percent of the world's populace confined in jail or prison. More disturbingly, researchers have found that women are the fastest-growing demographic of people who are incarcerated; over the last 30 years, the rate of women in prison has increased by more than 700 percent. Research also shows that the majority of people who become involved in the criminal justice system are individuals who were living in poverty before being arrested and who had little to no education or job training. Therefore, higher education should be encouraged and supported, since it reduces incarceration rates and can help lift people out of poverty.

There are structural barriers in place designed to protect the interests of the rich, while punishing and exploiting the poor. Those barriers prevent marginalized and oppressed people from achieving their dreams and play a key role in the high incarceration rates that we have in the United States. Our criminal justice system is using tough crime and drug laws to criminalize low-income communities of color—people who are often suffering from hunger, poor living conditions, failing schools, dangerous communities, homelessness, addictions, and other health issues—'rehabilitating' them through incarceration, which is nothing more than slavery in disguise, since incarcerated people are paid a maximum of 40 cents an hour for their labor.

Aside from being a 42-year-old single mother, a sister, an aunt, Latina, Dominican, a native New Yorker, a named scholar, and an Ivy League student, I am also someone who has been both indirectly and directly impacted by mass incarceration. People who have been incarcerated tend to hide their past due to the stigmas and negative connotations associated with those who have been convicted of a crime. However, I have such an amazing support system at GS—not only among our incredible student body but also with our administrators—that I've found the strength to openly share who I am.

My experiences at Columbia have helped me grow immensely as a person. At the same time, however, my experiences have caused me to reflect upon the thousands—maybe even millions—of other formerly incarcerated and low-income individuals who will never have these opportunities.

And so, I decided to start the Beyond the Box Initiative, a student group that works to help and unite current and prospective students who are enduring similar experiences as those I have faced as a formerly incarcerated person. I want other people to have these experiences to which I have had access, as a Columbia student—to have people trust them, accept them, support them, believe in them, and fight for them. Hence, Angel Solis, GS '19, Sarah Zarba, Social Work '19, Daudi Justin, GS '18, other Beyond the Box Initiative members, and I organized an event at Columbia University for Latinx Heritage Month—Unlocking Potential: Education is the Key. This event addressed the ramifications of limiting access to higher education to formerly incarcerated students, Black and Latinx, men and women who are disproportionately affected by mass incarceration, through the refusal to remove "The Box"—a request for applicants to disclose any involvement with the justice system—from college applications.

During the brunch for accepted students, Michael Christie, GS '15, spoke to incoming students and, even though his struggles were a little different from mine, I sat there in awe at how easily he was able to trust us with his personal story. I later met Franklyn Forbes, GS '17, Vida Biggins, GS '17, Katharine Celentano, GS '16, and other GS students, and it became evident why he was so comfortable speaking about his past, because my new friends, not only welcomed me with open arms in spite of my past, but actually support my endeavours.

I was also fortunate enough to meet Dean Harford at that same brunch, and he demonstrated a great deal of empathy when I spoke to him of the path which led me to GS. Although my official adviser and strongest advocate is Associate Dean of Students of Students Sara Remedios, Dean Hartford also keeps his door open for not only me but also anyone who might need his support. Professors such as Geraldine Downey, Carl Hart, Andrew Nathan, Dan-el Padilla Peralta, and Brian Goldstone have also been instrumental in the positive changes I have made. GS is a tightly knit community, where almost everyone tries to ensure that our transition and careers at Columbia are successful.

In my video answering Dean Harford, I did not answer him correctly because I did not know then how much studying at GS would impact my life. My answer to him today, only one year later, is as follows: Being part of the GS community has made me a stronger and more confident person, and it has made me a better advocate for underrepresented people such as myself. More importantly, however, it has empowered me to change Columbia and the world by helping people understand that individuals who have been incarcerated are normal people who make mistakes and don't always make the best choices.

No one is beyond redemption, and everyone deserves the opportunity to change their lives and be productive members of society. Let us not forget the Bible verse John 8:7, which reads, "Whoever is without sin among you, let him be the first to cast a stone."

People who have been directly impacted by mass incarceration thrive when we are given the opportunity to unlock our potential. The vast majority of us become leaders—or, as my friend Peter describes us, heroes—in our communities by promoting social justice issues and working in fields that help strengthen our country. We are so much more than the sum of our mistakes. We are lawyers, leaders, professors, motivational speakers, prison reform advocates, criminal justice advocates, clemency crusaders, New York Times bestselling authors, youth advocates, spiritual leaders, entrepreneurs, scholars, life coaches, and so much more.

Therefore, I am continuing my track record of setting high goals. I am striving to have not only Columbia University but all institutions of higher education remove "The Box" from applications, and I believe that we will make our country a better place by doing so, ultimately changing the world by reducing recidivism and helping to put an end to mass incarceration.

Social and financial equality can only be achieved if we are all given equal opportunities. Help us challenge inequality by facilitating access to higher education for formerly incarcerated individuals. Let's help them change their lives by putting them on the pathway to freedom and the "American Dream."

Leyla Martinez is a General Studies junior studying human rights. She is the president and founder of the Beyond the Box Initiative and a member of the National Council for Incarcerated and Formerly Incarcerated Women and Girls. She is also a Justice-in-Education scholar, Gilman scholar, Joey O'Loughlin scholar, Mother's Day scholar, Women's Forum Education Fund fellow, Beyond the Bars fellow, Program for Academic Leadership and Service scholar, Earth Institute Center for Environmental Sustainability fellow, and Women's Independence scholar.