Letter to the editor: Voting 'yes' for unionization at Columbia to improve the international student experience

Letter to the editor: Voting 'yes' for unionization at Columbia to improve the international student experience 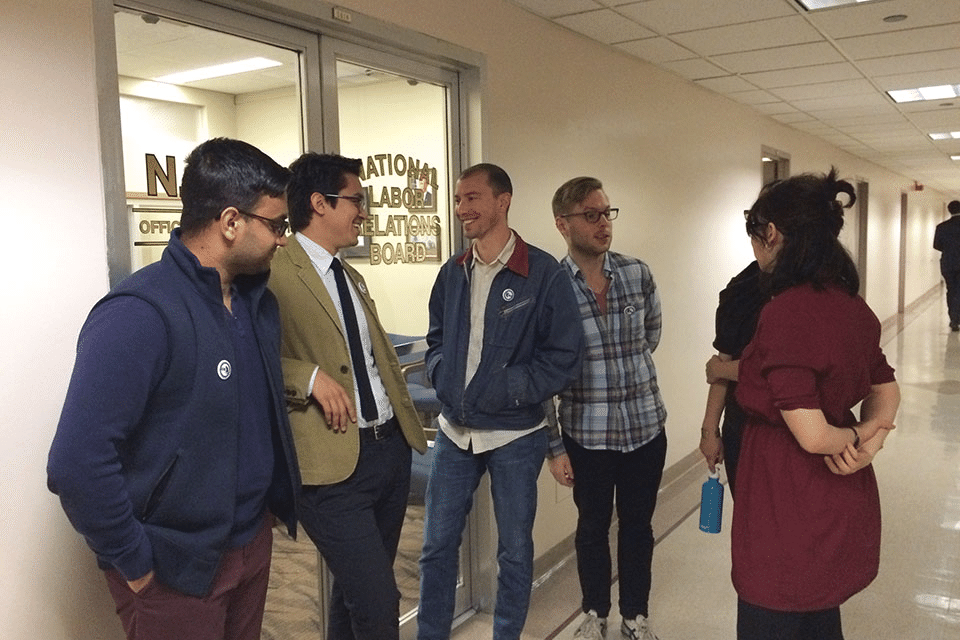 As international graduate students, we have been deeply disappointed by the Columbia administration's extensive efforts to convince us to vote "no" on unionization. We find it troubling that administrators would try to suggest that the United Auto Workers will work against our interests, when, in fact, we chose to work with the UAW in part because it has "consistently advocated for immigrant and guest workers to receive equal treatment and for expanded opportunities for international graduates of our universities to work lawfully after graduation."

We respect Columbia's right to articulate opposition to collective bargaining, but at a time when so many in society are trying to build unity, we find their divisive campaign strategies and their misleading op-ed especially distasteful. However, this last-minute effort by Columbia cannot erase the fact that coming together through the union over the last two years has been a productive and unifying experience for many international students at Columbia; nor can it change the fact that we believe the UAW is the right choice for our needs.

Contrary to what Provost Coatsworth and Associate Provost Austell suggest in their recent op-ed, the UAW has become an increasingly vocal and progressive advocate for international students and for our desire to maximize and strengthen lawful work opportunities and a pathway to permanent residency and citizenship in the United States after graduation.

Coatsworth and Austell's piece makes light of the union's advocacy for "no limits on employment-based green cards" for international graduates of U.S. universities. However, this principled position, which Hillary Clinton also supported in her campaign, is based on years of feedback from UAW members across the United States. A green card is far preferable to H1B, Optional Practical Training, or any other temporary or guest worker visa status, because it offers an individual much more security by granting permanent residency.

While the UAW laudably supports this long-term goal, the union nevertheless advocates for more immediate expansion of opportunities through programs like OPT and H1B. In commenting on the OPT extension last year, for example, the UAW said "until access to green cards can be achieved legislatively, we heartily support the extension [of OPT and H1B] as an enhancement of opportunities for international graduates of U.S. universities to remain here and work lawfully for a longer period, affording more time to find permanent status."

The provost, it seems, may misunderstand the complexities of H1B and other visa programs. His op-ed has the potential to mislead its readers by suggesting that efforts to reform H1B programs will shrink our opportunities. But such reforms would in fact expand our access to programs like H1B. The staffing agencies that abuse the H1B program and gobble up many of the visas each year often hire, in place of international college graduates, workers brought in from overseas. Eliminating that abuse, which the University rightly says the UAW would like to do, would open up more H1B opportunities for international students, not shrink them as the University claims.

And so, we will enthusiastically vote "yes" for Graduate Workers of Columbia-UAW Local 2110 on Dec. 7 and 8 and encourage our colleagues to join us. Here's why:

First, GWC-UAW has already been advocating for improving the quality of life for international students here at Columbia.

International students have played a central role in GWC-UAW since early 2014, when research and teaching assistants revived efforts to form a union here at Columbia. Over the last two years, the International Students Working Group has been one of the most dynamic and effective parts of GWC-UAW and, by extension, of the Columbia campus community.

Our efforts have touched on numerous issues. Union activists, in collaboration with the Graduate Student Advisory Council, started a petition that led to increased summer research funding for international students in the humanities and social sciences. We have also pushed for the waiver of international student fees, and helped coordinate visa and tax seminars.

We also participated in union activism and lobbying to expand OPT for F1 Visa holders; we engaged Congressman Jerry Nadler to help us address our concerns; and we took on the 2014 international tax debacle effectively, most notably by mounting a petition with over 1,000 signatures that got the administration involved.

Second, it is crucial that we are able to bargain for improvements to international student life, due to the unique challenges that we face.

While the security and predictability of a union contract will make life easier for all graduate students, it is especially critical to international students since our visas do not allow for off-campus employment. International students in other unions have negotiated pay increases, fee waivers, more affordable family insurance, time off, and much more—all of which enhanced life on campus.

Family benefits are especially critical, since many of us have partners and children. Owing to the inability to work off campus, which many of our partners face as well, and to the lack of affordable day care facilities or dependent insurance, it is difficult and often impossible for us to live with our families in the same country. Affordable dependent health benefits—which would be a major priority for bargaining—for example, would make it much easier for us to come from across the globe and contribute to the truly world-class research and teaching that happens at the University.

Finally, voting "yes" will also provide access to a larger political voice—the UAW—on issues that matter to us as international students.

With 60,000 academic workers nationwide, the UAW nationally and at the local level has become an important voice on issues that matter to international students, like avenues for post-graduation employment and, since many of us work in STEM fields, federal investment in research funding.

On research funding, we have already become active on the issue through our "Revitalize STEM research" campaign last year. This campaign drew inspiration not only from the UAW's national position in support of basic science funding at our universities, but also from efforts by local unions at the University of California and University of Washington. Those local unions waged a major campaign a few years ago that led nearly 40 members of Congress to sign a letter urging the U.S. House leadership to save science funding during the sequester.

On visa and immigration issues, last year we actively supported the improvements to the OPT STEM extension, which is a 24-month period of training for a student's program of study. We also look forward to joining UAW efforts more formally after winning our election. Voting "yes" will allow us to collectively push for an easier path to H1B visas and green cards.

In short, we have already gained ground by coming together through GWC-UAW and plan to build on these efforts moving into the future. We will be voting "yes" on Dec. 7 and 8, and hope our colleagues join us!