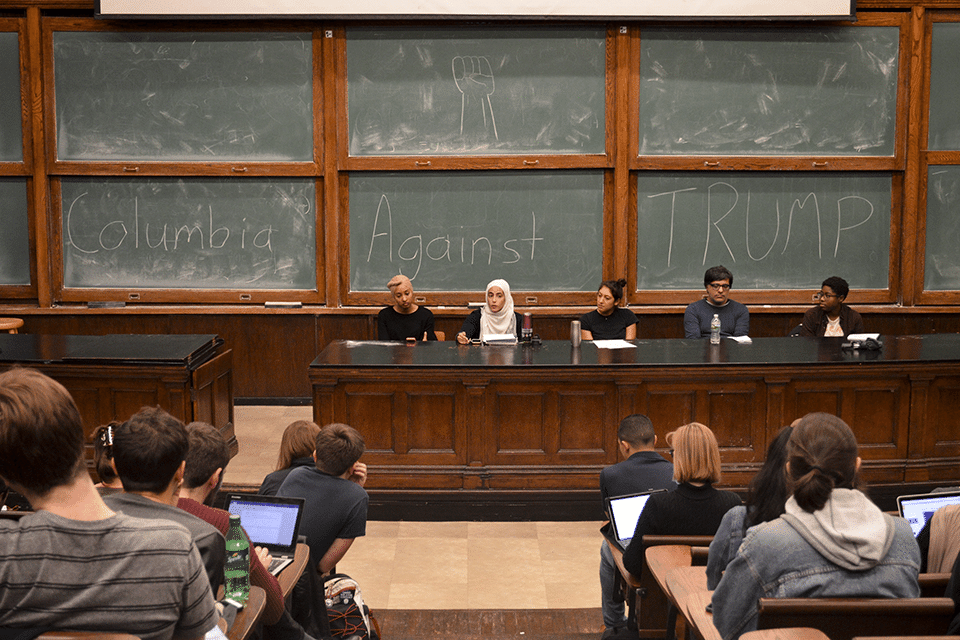 Sunday night, a hollowed-out book may have been found in the Butler Library stacks filled with interest forms for "Dark Enlightenment" recruitment. These forms used a slew of neo-Nazi terms and symbolism—most recognizably, the Nazi Reichsadler (the eagle symbol of the Third Reich). While new information is still coming to light, in some capacity, far-right elements have a presence on this campus against which we must organize together to resist and shut down.

This activity—whether in response to Donald Trump's campaign and election or predating him—is disturbing and must be combatted, silenced, and eradicated from our community. We know that Trump's election has already begun to embolden the far right and grant legitimacy to society's most violent, malicious, and disgusting tendencies.  In the 10 days following Trump's election, more than 900 hate crimes were reported across the country. One of these occurred just a few blocks from our campus when a Muslim student at Columbia wearing a hijab posted on Facebook that she was repeatedly harassed by three white men while walking on Columbus avenue. The so-called "Dark Enlightenment"—a movement propagating ideas of fascism, white supremacy, and ethnic cleansing—is only one of many small but vocal forces supporting Trump's hateful agenda across the country that must be stopped.

Columbia Against Trump, along with other student and faculty groups on campus, is currently investigating the anti-Jewish, Islamophobic, white supremacist formation that has apparently gained a presence on our campus. As a group of students, faculty, and staff committed to fighting President-elect Trump's agenda of bigotry—opposing the far right in all its manifestations on our campus, and protecting our peers who have been made most vulnerable by Trump's victory—we refuse to tolerate the normalization of white supremacy, Nazism or fascism in any form at Columbia.

We demand the University administration take every possible step to address the source of this racist material and to further investigate whether a white supremacist group has a presence on our campus, and if so, take bold and immediate action to eradicate it.

We, as students, faculty, and staff, renew our commitment to finding strategies to force this campus to institute real measures to protect those who are vulnerable in our community. We will continue to organize and speak out until all white supremacists emboldened by Trump and his ilk learn that their bigoted ideas will never flourish on a campus committed to justice. We will fight back until every member of our community understands that this hatred and cruelty, which can only be propagated by individuals seeking to defend and expand the privileges of the oppressor,  will not be tolerated at Barnard, Columbia, or our community at large.

Columbia Students for Justice in Palestine

The authors can be contacted at columbiaagainsttrump@gmail.com or their Facebook @ColumbiaAgainstTrump.