The art of telling PC jokes

The art of telling PC jokes 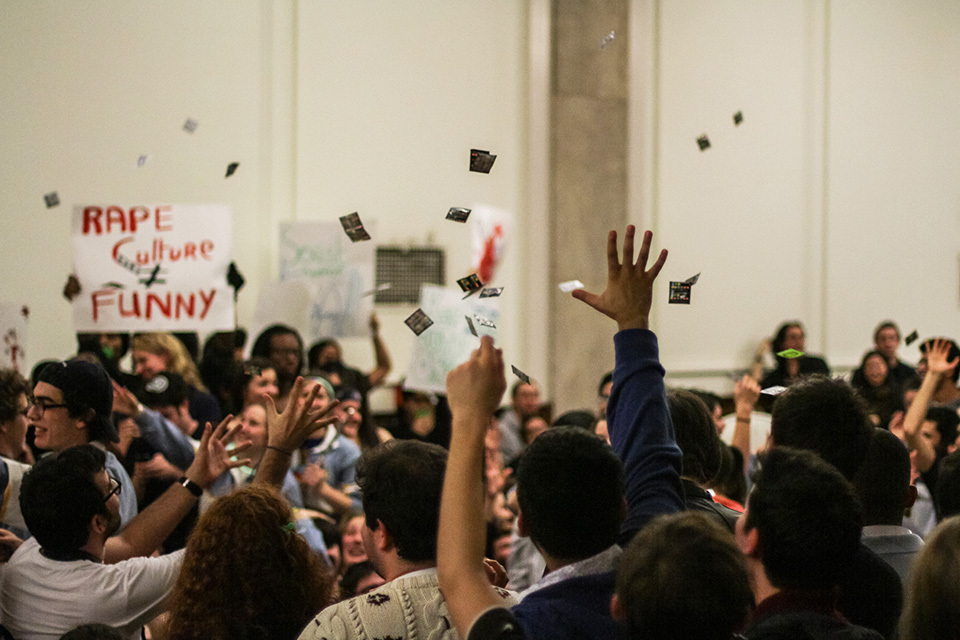 Face it: We've all laughed at offensive jokes. Whether they've been about race, religion, or sexuality, we've all found them humorous. I know I have. But they were just jokes, right? Aren't jokes often funny because they're offensive?

Recently, humor at Columbia has hit a roadblock: political correctness. On Tuesday, it was announced that the Columbia University Marching Band would be barred access to Butler 209 to perform Orgo Night, a tradition that has existed at Columbia since the '70s. While the administration says the decision was made due to the distracting nature of the event, many students have postulated that the offensive humor—which pokes fun at controversial topics such as rape, homelessness, terrorist attacks, and police brutality—was the real reason. Following the outpour of negative responses to these jokes, many on campus may justifiably be wondering, "Can't we have a little fun without having to always be 'politically correct?'"

In a community that loves to laugh, some find that censoring comedy at Columbia for the sake of "political correctness" limits freedom of expression. Students have the choice as to whether or not they want to attend Orgo Night and listen to the jokes. But maybe we need to put freedom of expression on the back burner and consider what political correctness actually means. According to the Merriam-Webster Dictionary, political correctness is "the idea that people should be careful to not use language or behave in a way that could offend a particular group of people."

While this seems like a good definition, the word "could" leaves a gray area for interpretation—and it is in this space that most Orgo Night humor falls. I am hearing many of my peers lamenting the band's inability to tell jokes because of the slight chance that someone might find them offensive. But there is a genuine question here: When does a joke cease to be funny and border on being derogatory?

As a Black woman, I make jokes about my own race and gender often. My peers also make jokes about their own social identifiers. These jokes are pretty funny, but it's important to notice that they are humorous because the person telling the joke belongs to the community that they are teasing. When non-members of a group deliver the same jokes, they appear to belittle the experiences of those in the minority group. Last year at Orgo Night, participants who were not directly affected by these issues joked about the Planned Parenthood shooter, police beating a Latino student, and offered No Red Tape a new slogan: "Don't Rape People, You Dirty Jew."

The key to humor and the ability to poke fun at serious topics lies in the element of self-deprecation and knowing your prerogatives.

Personal mockery gives us a platform from which to discuss aspects of our life experiences in humorous ways. I'm not saying that every time anyone wants to tell a joke, they need to state their identities. Rather, there is a difference between punching up—commenting on the oppressive structures of power that exist in our society and at Columbia— versus punching down—mocking an already marginalized group from a position of entitlement.

We cannot forget that every joke we deliver reflects who we are as people and the position from which we're speaking.

That is how political correctness works. It does not exist to coddle marginalized groups and shield them from satire; it stands as a marker for when jokes go too far. Political correctness is, in short, basic human decency. Where participants of Orgo Night go wrong is that they believe everyone, regardless of identity, can tell certain types of jokes. This becomes problematic when a group that is in power makes fun of an underprivileged community.

Humor finds common ground between the comedian and the audience by connecting them through shared experiences. Marginalized groups tell self-deprecating jokes to each other to show solidarity and fight against oppression. If these disenfranchised communities can laugh at the stereotypes imposed on them, they can break down those labels amongst themselves. That's what Orgo Night has failed to do in the past, with jokes written and spoken by privileged members of the band. And although there has been an increase in women, people of color, and LGBTQ+ members in the group who write and perform the jokes, this change does not make up for the historically institutionalized voice that the event still holds.

Orgo Night does not seek commonality amongst the Columbia family; it reinforces the acceptance of prejudice by creating a platform from which marginalized groups can be ridiculed in the name of good fun for the masses.

Political correctness stands not as a roadblock to comedy, but rather as a catalyst—when it's delivered in the right way. Megan Garber, a writer for The Atlantic and graduate of Columbia's Journalism School, has written about how "PC culture" can actually lead to a more empathetic society. In her article, "An Optimist's Guide to Political Correctness," Garber states that political correctness "helps progress along. It is a way of adjusting—fitfully, awkwardly—to an environment, political and otherwise, that gives so many of us newfound exposure to each other."

The shift towards politically correct humor actually is more vital now than ever, as our country prepares for a president whose humor is known to be polarizing and derisive. It may be awkward at first, but it will allow us all to progress to a more even playing field. Adopting PC culture and relocating Orgo Night isn't about being careful or restricting free speech; it is about respecting your audience enough to laugh with them and not at them.

The author is a Columbia College sophomore majoring in anthropology. She is a member of Sabor, a Latinx dance group, and the Black Students Organization.

To see other pieces from this Scope, click here.