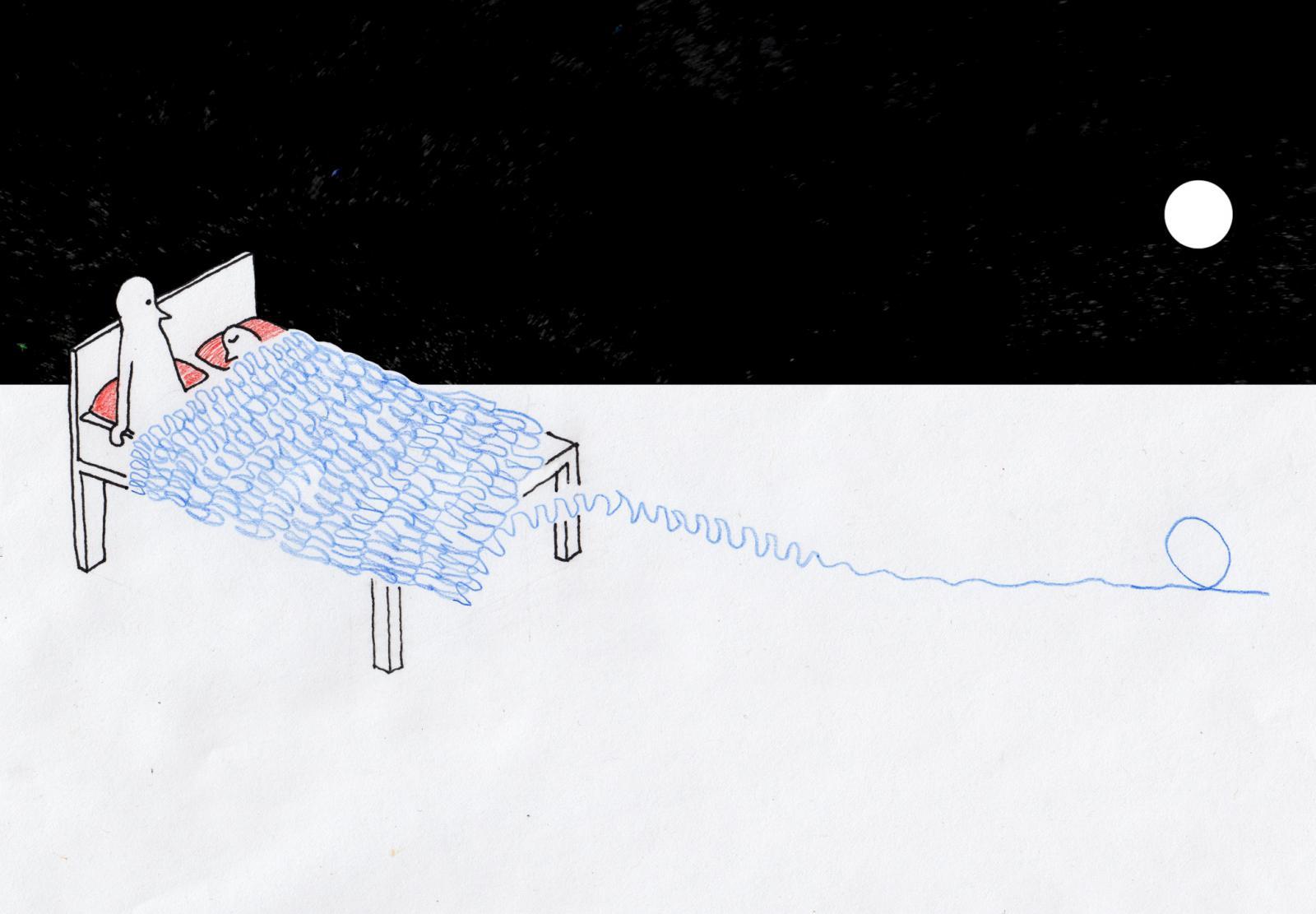 It would begin the usual way, in the middle of the night. I would be sprawled in a giant 'X,' drooling on the pillow next to him, dreaming of something innocuous, when my heart would begin to race and my arms would start roving frantically around the bedsheets. He was the one who would drag me out from the troubled fringes of sleep, his hand on my chest, and tell me that everything was going to be alright.

I couldn't talk about it with anyone else. He was my best friend and my boyfriend, but only rarely would he ever actually bring it up: "Do you have those dreams often?" or, "Did you sleep through the night okay?" The nights that he wasn't there, I would chug bottles of NyQuil that I kept next to my bed to induce a coma-like sleep, free of nightmares.

My psychologist at the time found a way to bring this up during every session, trying to get me to acknowledge the wrongness of the situation since my PTSD had begun to accelerate. She dubbed my behavior "extremely self-destructive" and explained that I was putting myself in precarious situations to assert some sense of control.

Sometimes, when you feel like your life is falling apart, quickening the inevitable descent into pariahdom seems like the only thing left to do.

Looking back, it's easy for me to recognize how this must have been what provoked my boyfriend to feel like he had to be there for me all the time, why he chose to carry my weight. He had known about my rapes since before we started dating and about the possibility of my getting worse shortly thereafter. But I had started seeing a therapist at school and he was determined to help me through this dark period of my life.

We thought we could handle anything my past could throw at us, that we were writing a love story whose end had already been determined: I was going to get well. I would stop trying to commit suicide, start playing the piano again, and finally tell my parents about what had happened to me as a child. I would pursue a job in human rights, transfer to Columbia—things would matter to me again. Defiance! Redemption! Transformation!

He had seen my scars and still told me I looked beautiful, what was more proof than that?

But nothing can prepare you for remembering that kind of abuse. How fundamentally less human you feel when you have to rely on someone else to bring you back to reality, as you wake feeling ashamed and emasculated.

We still went to the movies, played the board games that everybody else thought were boring, but when my nightmares started following me into the day, I stopped going to class. In between consoling me, negotiating with my teachers to bring home my assignments, and coordinating with my friends to make sure I was never left alone, he went with me to my therapy appointments, where he'd sit in the waiting room as I cried in the next room over.

When he stopped being able to pull me out of my dreams, I started popping caffeine pills like Tic Tacs, thinking that if I could stay completely awake I wouldn't have to suffer through the subconscious film reel of my rapes. The end result was that I became sleep-deprived all the time—some days I couldn't even tell if I was awake or not. The things that used to make me happy couldn't even make me smile anymore, and I started lashing out at the people closest to me. Including him.

There was a time when we used to talk about how much better we were than other couples, how we never had the petty fights and misunderstandings that everyone else seemed to be having. Truthfully, I had never felt that way, never flirted with or thought about another boy like that before. The more time we spent together, the harder it was to let go, and so I thought that we were meant to be together, or something had predetermined that our paths would cross. I know more than anything he wanted to be there for me, but after nearly a year of trying, my past had dismissed all of the things that we had come to know and love about one another.

"I can't do this anymore, Joel," he said quietly to me one night. "I can't love you anymore."

There is some grandeur in feeling everything unravel at once. We broke up almost as soon as I moved to New York. Alone and in a new city, I still felt so dependent on him. We kept in contact for a few weeks but he recoiled, explaining that he couldn't bear to watch me suffer anymore, and I haven't heard from him since.

I used to wonder about how much easier this all would've been if I had been more attentive, or if he had fought with some measure of the truth actually spoken aloud: "I love you, I'm not strong enough to watch you go through this, but I'll always love you." But I know I just wanted him to be there for me, without asking: At what cost?

After the breakup, it took me nearly a year to come to terms with everything that happened and to be able to move past the overwhelming sense of guilt that I felt for having created such a large and terrifying distance between us. I have reached a point now where I've finally started to feel like myself again. I credit that victory not just to myself, but to my friends and my parents who were there for me when I needed them the most.

But sometimes I still catch myself thinking about him. The love, the longing, the pain, and the separation taught me that my situation, however unhappy, despairing, or fraught with anxiety, didn't give me the right to overstep the boundaries of others—especially the man that I love. We were ill-equipped to handle an all-consuming situation, and neither of us wanted to be the one to throw in the towel. Sometimes in life, the divide between what we want and what we should do is so great that we make no effort to close it at all.

The author is a political science major in the School of General Studies, a nominee for the 2015 Nobel Peace Prize, and the author of the upcoming novel "Benevolence," which talks about the effects of trauma on a relationship.