Campus discourse, the myth and meme

Campus discourse, the myth and meme 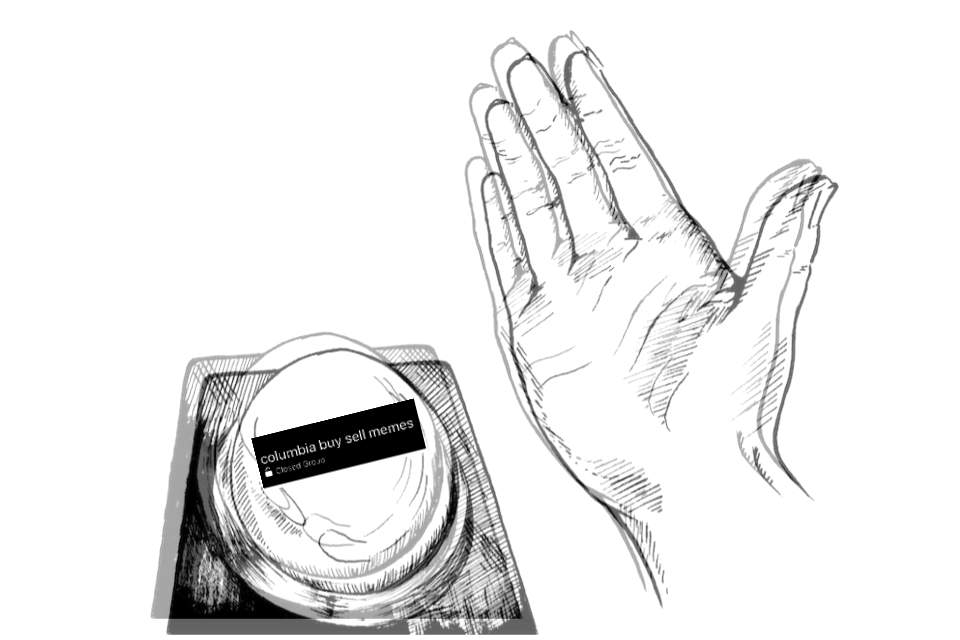 I think about campus discourse a lot.

It would seem that many Columbia students think about campus discourse a lot, too. The proof? Entering the word "discourse" into the search bar of "columbia buy sell memes"—the often profane, and occasionally funny, Facebook group that emerged last finals season—yields several memes.

Classical definitions of discourse, of course, don't seem to leave much room for memes. The Oxford English Dictionary defines discourse as "reasoned argument or thought." Thus, theoretically, when people engage in discourse, they're thoroughly and logically considering an issue via extended discussion. It follows that the issue at hand should lack a single, objective solution and be rife with thought-provoking questions.

It may seem inappropriate to point to an online repository of jokes laden with fart, nut, and titty references as a metric of the discourse happening at Columbia. Once you get past the Comic Sans and low-res screenshots of scenes from The Office, you'll find that memes actually can function as a kind of discourse. After all, "buy sell memes" has covered all kinds of relevant hot-button issues—gentrification, identity politics, and Hamilton's lack of a second elevator are among them.

Discourse becomes a lot more complicated (and hip!) when it's situated within a Columbia context, I guess.

Critics of Columbia's campus culture frequently deride the insularity of the liberal Columbia bubble. Morningside Heights, these critics allege, is an echo chamber. It's a bell jar. It's an ideological circle jerk specifically formulated for the comfort and pleasure of millennials.

This criticism is legitimate, to a certain extent, so people concerned about the unpleasant side effects of living in an echo chamber can feel somewhat vindicated in their respective crusades. As a private university in a liberal area, it's objectively true that more Columbia Lions bleed blue than red (although in my mind, it's more worthwhile to note that Columbia's exorbitant tuition fees mean that a high percentage of Lions are probably blue-blooded.)

The echo chamber argument certainly contains truths about Columbia. But I'm not too concerned about it—Columbia's so-called insularity supports and ensures the safety of students from marginalized communities. Instead, I'm more interested in how and why the echo chamber argument doesn't engage much with how "campus" fits into "discourse" here.

Why should we focus on equalizing campus discourse across the political spectrum when not all Columbia students seem interested in speaking up at all?

In the past, I've often referenced the "free marketplace of ideas"; I may have trusted Rauch and First Amendment scholars like him a little too much. As Spectator's former editorial page editor, I certainly heralded my own section as an equal-opportunity platform, a space for campus voices of all kinds and creeds. I told myself, my staffers, and my readers to "always clap back." Don't like something? Write an op-ed about it. Email the dean. Contact your resident adviser.

The truth is that campus discourse is in no way equal, and it's not just because of real or perceived political biases. Instead, it's because—whether we like it or not—it's really, really hard to get noticed around here.

Let's say you want to make a sizable impact on Columbia's campus culture. Here are your options: You could join a political organization—at the risk of bending your personal politics to the will of a united front. You could run for student office—at the risk of being stonewalled by administrators and befuddled by University bureaucracy. You could pen a scathing piece of journalism or a personal essay—at the risk of either not being read or butting heads with your tyrannical editor. You could attend one of President Bollinger's fireside chats or schedule an appointment with President Spar—but you had better move quickly and sign up before slots run out or the latter president literally packs her bags and leaves Morningside Heights for good.

The campus discourse I know has always been propped up by the meme queens, columnists, pundits, and student leaders who know how to commandeer the platforms available to them. But while I've always loved overhearing the meme queens, disagreeing with the columnists, arguing with the pundits on Facebook, and applauding the work accomplished by student leaders, I frequently wonder about the voices I wasn't hearing because they simply haven't found a platform yet.

If I had written this piece a few months ago, I might have inserted a call to action here. I might have asked the readers of this column to write more op-eds or get more involved in campus politics rather than pondering abstractions about issues of national security that are far, far away from here. I might have encouraged the broadening of Columbia's media ecosystem to ensure the visibility of more campus voices.

But in hanging up my hat as editorial page editor and preparing to don a mortarboard in the spring, I think I'm done with the discourse recommendations.

Paulina Mangubat is a Barnard College senior majoring in political science and East Asian studies. She is a former editorial page editor for Spectator and the former president of Columbia University Asian Pacific American Heritage Month; to her dismay, she is not a former child star. Paulina Please Stop Being Extra runs alternate Mondays.