A women’s college for the one percent

A women’s college for the one percent 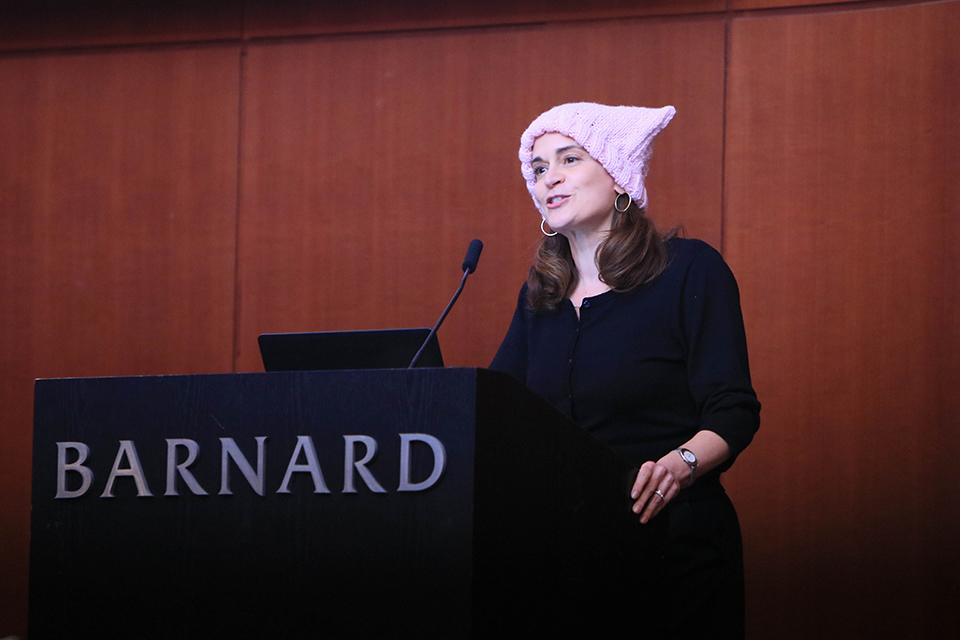 During the first semester of my sophomore year in fall 2014, I attended a Family Weekend forum given by President Debora Spar. As a recent transfer, I was unsure of my place at Barnard. At the forum, President Spar spoke about diversity, the college’s mission, and fielded questions from parents. Sometime during her talk about the college’s demographics, President Spar suggested that Barnard wanted public school students, but she wasn’t sure if they were ready.

If I felt out of place at Barnard before hearing this, it was nothing compared to how I felt after. I, like 90 percent of young people in the country, according to projections by the U.S. Department of Education, attended public middle school and high school. Did the president of the college truly believe that 90 percent of students in the United States were not ready to come to Barnard? I spent much of my first year feeling wholly inadequate—no matter how well I performed in my courses, I knew I did not fit the president’s vision of Barnard.

During my tenure on the Student Government Association, I have interacted personally with President Spar, members of the board of trustees, and other administrators on task forces during one-on-ones and SGA council meetings. I have learned a great deal about the inner workings of college bureaucracy, about who has power over what department, and who does not. At the end of the day, I have to conclude that Debora Spar performed the job of President of the College well—well enough that I worry her legacy will be more than a passing footnote and will define the college for many years.

The function of the president of a college is mainly, of course, to raise money. But in that process, they must also represent the public “face” of the school—a brand. (After all, as a trustee insisted to me at an SGA rep council meeting, the college is a business.) I know less about how successful a fundraiser President Spar was, but I believe she did a bang-up job of building Barnard’s brand as a place for the elite to stay elite, and for the rest of us to try and claw our way into their rankings.

I no longer view her comment about public schools to a packed room of parents, nor her New York Times op-ed, “Aging and My Beauty Dilemma,” nor her urging rep council to all donate to Barnard, as simply poor-taste musings of an out-of-touch, privileged woman. Each appears to be a calculated marketing move to advertise Barnard as a home for the one percent.

At Family Weekend, the comment about public school students came amidst a series of parent concerns about how much the college spends on financial aid. It seemed to function as a way to soothe the anxieties of wealthy parents, to ensure them that Barnard, too, retained reservations about committing finances to less privileged students.

Spar’s comments serve as a reminder that achieving the wealth and status of Barnard’s greatest donors represents the pinnacle of your Barnard education—if you are not born into it, the college will take you there.

Although I know now that the majority of day-to-day policy decisions do not come solely from the president’s office but from the trustees or other members of the administration, I still see the way the college’s “brand” under President Spar has permeated college policy. For example, when the application fee for Barnard rose to $75, I appealed to members of the administration. I made the case on the Presidential Task Force on Diversity and Inclusion that students tend to look for concrete changes to policy when assessing how inclusive the college is. Making the application fee free or inexpensive would be a simple way to set a powerful example to prospective and current students, particularly when so many other women’s colleges have free applications. I was told that admissions represents a financial burden for the college, which I respect—but I also learned that Barnard’s application fee was now on par with Harvard’s.

And in truth, it always appears to be the latter reasoning, more than the former, that is the driving force behind these decisions. A frequent perception on campus is that if the administration truly felt they could not employ the admissions staff without an exorbitant application fee, the Task Force on Diversity and Inclusion would not petition to hire another administrator (a Chief Diversity Officer), and that the college would think twice about demolishing Lehman Hall. A large portion of the Bold Standard funds are being directed toward the new Teaching and Learning Center building. These funds are often solicited directly for this purpose, which begs the question, why couldn’t solicitations for scholarships, or for free winter housing, or to ensure that students with disabilities do not have to pay the single price to live in an ODS single be granted a higher priority?

The $75 application fee is another tagline for our brand. We are not like other women’s colleges. We are expensive. Our president attends annual parties on Upper East Side “packed, as [they] always [are], with a particular subset of the city’s elite.” Our students are cut from the same cloth—if they are so fortunate to be blessed with a scholarship by this elite institution, they know who to worship, and who to aspire to become.

This is less an appeal to my fellow students to consider the qualities we truly want in a president (the cynic in me says we won’t necessarily have much say) and more to think about what we value for ourselves—how the culture at Barnard, as shaped by Spar and the board of trustees, permeates, and occasionally warps, our perception of ourselves and the world.

For example, according to a 2017 study in the New York Times, Barnard actually boasts a much higher percentage of students from the bottom 40 percent than many other private colleges across the nation. However, Barnard does little to celebrate this. In my time as SGA Representative for Inclusion and Diversity, I have heard enough to make me think that many of these students feel swept aside by the administration’s policies and rhetoric.

I think I was ready to come to Barnard. I took three graduate physics courses, I had three research internships, I served on SGA. Yet somehow, I still question whether I actually gave something to Barnard during my time here or if the powers that be were just doing me a favor. A foot in the door is one thing, another is ensuring students believe they are equally contributing members to the college regardless of their socioeconomic status once they arrive.

The author is a Barnard College senior majoring in astrophysics. She is the SGA Representative for Inclusion and Diversity.