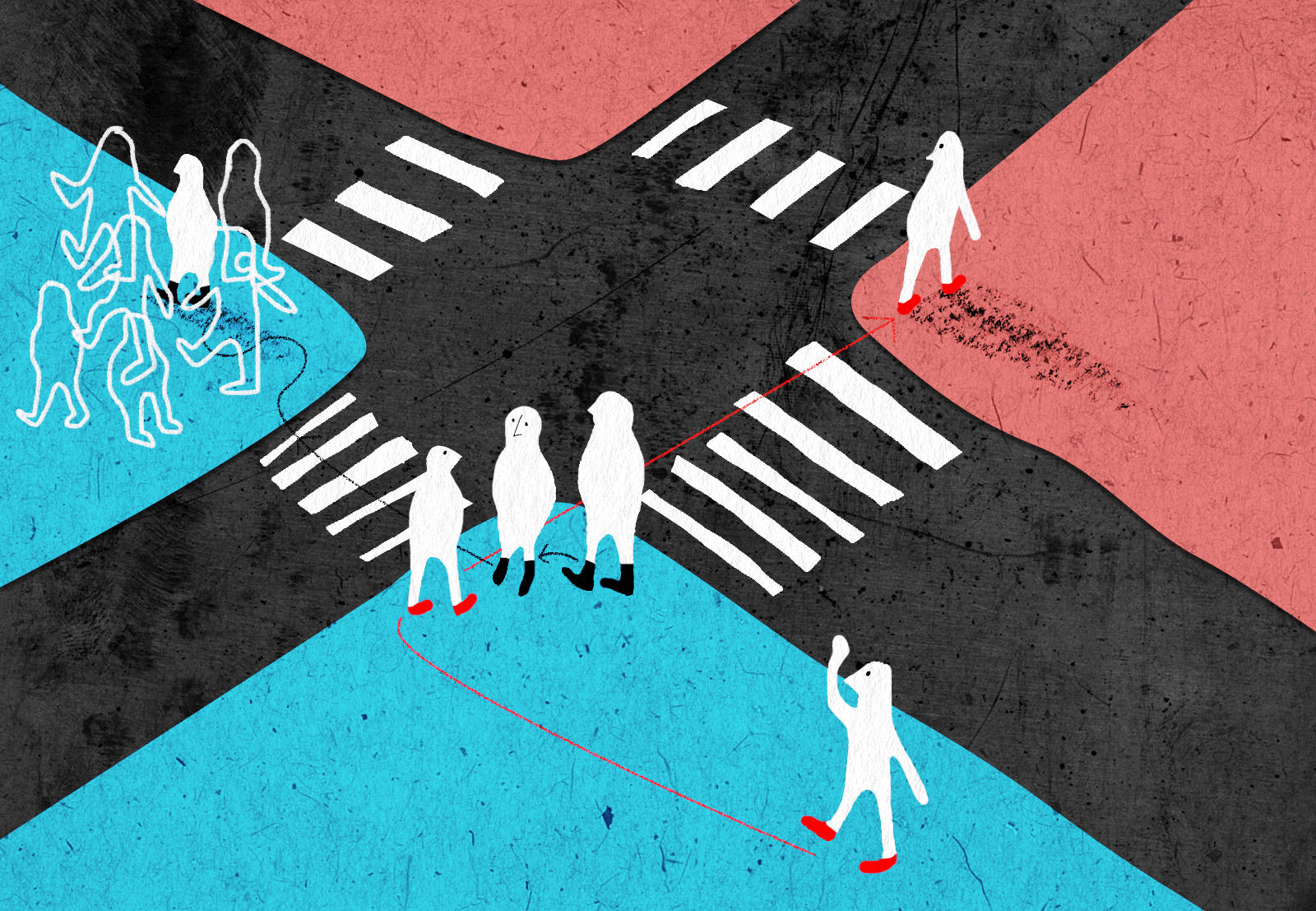 Midtown was flush with tourists and businesspeople—everybody harried and slick with sweat in their suits or Adidas Superstars—on the July afternoon when I saw Nick again. Everything felt hot and close, and I was happy, heading uptown from my dream internship to meet some friends for dinner. I almost didn’t recognize him when we passed on a corner near Penn Station. It had been three years since I’d last seen him.

When I was a senior in high school, I entered intensive outpatient treatment for anxiety and depression. Every day for a month, I spent six hours in group and individual therapy sessions, and completed workshops on topics like how to supplement medication with aerobic exercise. I’d kept the reason for my departure from school quiet, and during that month, I didn’t see much of anyone.

Depression made me feel as though some external force had ripped me away from any comfort there was to be found in the world. But it was me, I was the force. These abstracted, frantic thoughts were characteristic of the way I felt and talked throughout my senior year. Nobody seemed to understand a word that came out of my mouth. That changed in early April, when I heard from Nick.

We’d been acquaintances throughout high school, and for years I’d nurtured a crush on him. That awful spring senior year, he reached out to say that he’d heard I was having a tough time and wanted to offer his support. After that, a new routine quickly developed: At the end of each day in the outpatient treatment program, I’d grab my phone back from a nurse, greedy for it, then from 3:00 p.m. until I went to bed, I’d text Nick. Taking him up on his offer of support, I told him all about the challenges I was facing in treatment.

When my diagnoses finally came, it was a relief—I finally had a name for my feelings of worthlessness and despair, and the consoling knowledge that I wasn’t alone in feeling them—but it also made me feel forever marked. Even if I went decades without another depressive episode, this one would always be part of my past, something I’d have to explain to romantic partners and close friends. I feared the judgment and rejection of these imaginary loved ones. I was familiar with the dismissive way people typically talk about the mentally ill—it was enough to convince me that other people wouldn’t think of me as deserving of their love.

But the version of Nick who lived in my phone never made me feel judged. He seemed to understand all of it.

After I survived a suicide attempt in late April, Nick was among the first people I texted. I was vague about the details of the incident. It was one thing for a boy I liked to know that I struggled with depression, and quite another for him to understand that I was suicidal.

He texted back that it was going to be okay. For some reason, I believed it when he said it.

In May, when I returned to school, Nick and I didn’t cross paths much. I chalked his apparent lack of interest up to nervousness, and attributed my own nerves to my anxiety disorder. After a few weeks, we made a plan to watch a movie together. Years before the advent of Netflix and chill, I understood what that meant. Riddled with anxiety about my fitness for love and sex and life in general, I was certain he would call off our plan.

When he canceled on me hours before we were supposed to meet, I felt oddly triumphant: I’d been right to feel anxious. And if I was right about this, I thought, surely I was right about my other anxieties, too. I must be worthless, and worse, I must have made up his interest in me. I was crazy after all.

He never offered an explanation for the cancellation, or for the way he continued to text me afterward as though nothing had happened. When we saw each other at school, he ignored me. I’m never going to know his reasons for leading me on.

Back in Midtown, I called his name and watched him turn around. I took in his expression of benign indifference, and for an insane moment, I thought I’d start laughing and never stop. He had no idea, did he? He’d never had any idea.

Months after graduation, when new friends at Barnard asked about my dating history, I thought instantly of Nick, but I found it difficult to explain our relationship—because, after all, we hadn’t actually had one. All I had to show for my months of anguish and desire were our texts and the group photos we’d taken with friends at prom and graduation. Late at night in my dorm, I’d grow angry just thinking about it: I had made myself ridiculous, and for what? Like my depression, it had all been in my head.

When I became involved with Columbia boys, my feelings often seemed like weak echoes of my intense crush on Nick. I’d meet somebody, he’d intrigue me, and I’d grow ambivalent toward him as soon as he appeared to return my interest. I was stumped by this. These were boys I could have real conversations with, whereas my texts with Nick had rarely been about anything more meaningful than the latest Game of Thrones episode. Our conversations about my depression had been exceptions, but I found it increasingly difficult to explain to myself how they had fit into the fabric of our relationship. Slowly, I realized that my depression had functioned as a crucible, forging feelings and fantasies that had little to do with Nick, the actual person. In the absence of that crucible, I would have to discover other, truer ways of establishing and assessing my connections with boys. I still haven’t figured it out.

On the corner in Midtown, Nick and I exchanged small talk. It seemed astonishing to me that all this time he had been out in the world, doing things and caring about people. Then suddenly it didn’t seem astonishing at all. It didn’t surprise me that we didn’t have much to say to each other. After all, we’d never really been friends.

There was nothing I could say to him on that corner that would alter what had happened or make him feel remorse for it. An apology from him wouldn’t change the way I live now.

We said goodbye, and I turned to walk north. I checked my phone. Our conversation was going to make me late for dinner with my friends. I thought about calling his name and adding one last loaded remark, something that would convey the enormity of the feelings I’d once had for him; I owed my teenage self that much. I wasn’t sure what I’d say, but I figured it would come to me when he turned around. The light had changed, though, and he had already disappeared into the crowd.

The author is a Barnard College senior majoring in English. She hopes this piece makes her seem chill.