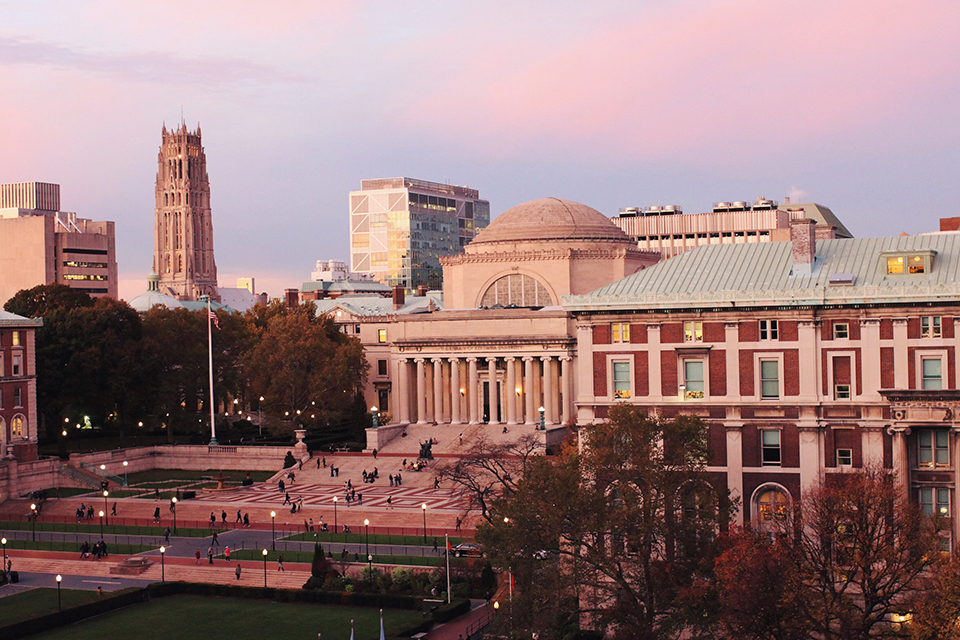 Omar Barghouti, headliner at an event hosted by Columbia University Apartheid Divest on Monday, April 24, has spent over a decade advocating against a negotiated solution to the Israeli-Palestinian conflict, effectively advocating for the end of Israel as a Jewish state. As co-founder of the Boycott, Divest, and Sanctions movement against Israel, Barghouti has called for campuses worldwide to join him in isolating Israel and killing the two-state solution, and CUAD wants to make Columbia complicit in this injustice.

As long as Israel exists as a Jewish and democratic state, Barghouti plans to continue the BDS campaign, which he himself has admitted “aims to turn Israel into a pariah.” Regardless of whether the Palestinian government secures a final-status solution to the conflict, BDS activists following Barghouti’s call will continue to encourage Israel’s international isolation. “We oppose a Jewish state in any part of Palestine,” Barghouti said, denouncing any Palestinian who is willing to compromise for the sake of peace as a “sell-out.”

Barghouti’s intransigence is embodied by the demands of his movement. One such demand is the return of all Palestinian refugees—those Palestinians descended from people who resided in the British Mandate of Palestine before Israel’s establishment—to Israel, not the Palestinian territories or a future Palestinian state. Because the Palestinian refugees are the world’s only people whose refugee status is considered hereditary, their numbers have grown from some 750,000 in 1950 to around five million (UNRWA-registered) people today. Were these descendants to return to Israel, Jews would instantly become a minority in the country established to provide them refuge and defend their rights. American presidents Bill Clinton and Barack Obama have both criticized this goal as a direct challenge to Israel’s right to exist as the national home of the Jews—a right unchallenged for every other nation. Unlike Obama and Clinton, Barghouti has no qualms about singling out Jews, saying: “a return for refugees would end Israel’s existence as a Jewish state.”

Barghouti’s fundamental problem with Israel is not with any actions the nation has taken, but simply that Israel exists. If a Palestinian state in the West Bank and the Gaza Strip were established tomorrow, if every last Israeli in the West Bank were forcibly evicted (as was done in Gaza in 2005), if Jerusalem became the shared capital of Israel and the nascent State of Palestine, Barghouti and his CUAD hosts would still continue their delegitimization campaign because they “oppose a Jewish state in any part of Palestine.” That is, the land area that comprises the West Bank, the Gaza Strip—and Israel. So while CUAD members claim that the BDS movement is “focused on securing equal rights” and not “demonizing Israel,” the movement they have embraced seeks to end the Jewish right to self-determination, specifically by demonizing Israel. The movement’s warped version of justice precludes the possibility of a solution that satisfies the needs of both Israelis and Palestinians.

Fortunately, many Israelis and Palestinians are capable of a more nuanced worldview, one that recognizes that justice cannot be a zero-sum game. One such Palestinian is business leader Bashar al-Masri, who has chosen to work with—rather than against—the Israeli government to build Rawabi, a new Palestinian city in the West Bank, the construction of which is employing 10,000 Palestinians. Israeli and Palestinian organizations work toward peace by engaging their populations in the difficult but necessary project of reconciliation and coexistence—a project that, on our campus, SJP has rejected as “normalization.” Aryeh recognizes and supports the national rights of both Israelis and Palestinians in our support for a secure Israel as part of a two-state solution. As part of our Invest in Peace campaign, we are continuing to raise awareness and funds for Arab and Jewish coexistence programs, like Givat Haviva’s Children Teaching Children initiative.

Barghouti and his supporters know that to succeed, they must spread the lie that Israel’s very existence is a permanent injustice to Palestinians. But to do that, they need to reach beyond their Manichaean world in which Israel’s existence is unjust. They need us, Columbia students, to buy into the idea that Jews have no right to self-rule—a right accorded to all other nations.

As Columbia students, we should oppose and challenge this bigotry. When a student group on our campus declares that all Zionists are racists, defaming many of our friends and peers, we should refuse to give that student group our support. When Jewish student after Jewish student speaks out as to how CUAD’s anti-Israel activities marginalize them, we should pay attention and ask ourselves if we would countenance any other movement that marginalized students of any other identity.

The author is a sophomore at Columbia College studying computer science and philosophy. He is the incoming president of Aryeh: Columbia Students Association for Israel.