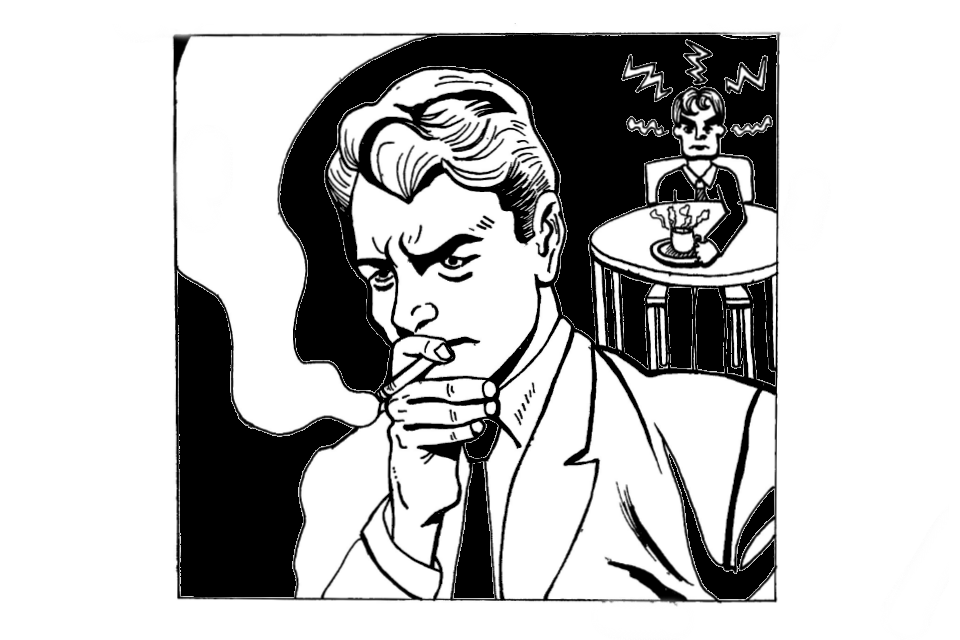 It’s 9:30 a.m. I’m on the 1 train, halfway through my commute to Morningside Heights, when two guys carrying acoustic guitars board my subway car. “Shit,” I mutter. Before the doors even close, they begin playing, their voices mashing horribly with the shrieks of train wheels over metal tracks. A few months ago, at the start of my time at Columbia, these kinds of scenes were novel entertainment to me—one of many charming oddities that made New York City a fascinating place.

Yeah, fuck that. My ride has been quiet for seven stops, and this shitty music is totally unwelcome. Like other riders, I keep my eyes down, locked on my phone screen, my body language deliberately unresponsive as the two men walk up and down the length of the car. No one gives them money, and I sigh in relief when they get off at the next stop. I’m left with lingering thoughts of grabbing and smashing one of their guitars—may they never again interrupt anyone’s commute.

Holy shit, what the hell is wrong with me? Months of commuting on the subway have turned me into a real asshole. A New York City Asshole, specifically. I’ve become one of those people: part of a minority of brash, unempathic people who give New York its reputation for rudeness and hostility. These individuals can switch between pleasantries, rage, and total detachment within a span of seconds. They argue with strangers without hesitation. Frankly, they scare the shit out of me—and I’ve slowly become one of them.

Of course, my conscience tells me that these assholes cannot possibly represent the entire city; surely the common brashness I see in New Yorkers must be a natural byproduct of city life. But as an outsider, it can be difficult to spot the distinction between big-city pragmatism and genuine, widespread hostility. I’ve frowned angrily at articles on the bystander effect, common on the NYC subway, whereby crowds of people witness something horrific but never bother to intervene. I’ve driven on Manhattan streets and had New Yorkers calmly walk in front of my moving car, projecting the confidence that an accident would hurt me more than them. I’ve even had an 80-something-year-old woman tell me to get the fuck out of her way. I’ve never held romantic notions of this city—but when I turned to that angry 80-something-year-old lady and replied, “Calm the fuck down,” I shocked myself. The words came out naturally, reflexively, like a casual greeting. She barely seemed to notice.

Why does New York tend to turn people cold? Maybe it’s because the city itself is emotionally exhausting. There’s a practical limit to how interactive, polite, and courteous we can be, and before long, we find ourselves—our personalities, even—overwhelmed by New York and the millions of people here who learned to be cold long ago. When I first started commuting to campus, I would say “Sorry” or “Excuse me” every time I bumped into someone on the subway. I wouldn’t rush on the sidewalks unless I was running late. And within reason, I generally didn’t mind being approached by strangers or having musicians play music on my subway car. I never saw myself being, or becoming, any other way. So much for that.

It’s 9:40 a.m. I’m a few stops from campus when a disheveled man boards my train. The doors close, and he begins a well-rehearsed speech. “Good morning everybody! I hope you are all having a blessed day.” We were, until now. “My name is Paul.”—or something like that; it could be any name—“I’m homeless and just trying to get my life together. All I’m asking for today is your generosity, to help me get a meal and get myself off the streets.” Is he telling the truth? Maybe. Either way, his speech goes on, and he eventually walks up and down the car asking for donations.

I see different versions of Paul all the time. Sometimes he’s a war veteran, or an addict trying to stay clean. Sometimes, he’s genuinely polite, other times aggressive. Sometimes he seems sincerely mentally ill, or drunk, or high. Today I can’t tell, but I don’t judge him. I know that addiction and mental illness are serious medical problems that require treatment. I know homelessness can be nearly impossible to escape. But without exaggeration, Paul is the second, third, possibly even the fourth person I’ve seen asking for money on the subway today, and one of dozens I’ve seen this week. His speech—his genuine plea for help—is something I have heard so many times that my sense of empathy has been taxed to the point of burnout.

My privilege enables this cruelty, and New York normalizes it. Paul, and those like him, roam the subways clinging to survival, seeking modest help from those who still feel a sense of warmth toward the people around them, who still feel alarm and obligation at the sight of common suffering and injustice. I haven’t felt that way in New York for a long time. I’ve become an asshole.

Paul doesn’t get off at the next stop. Instead, when the train resumes moving, he walks through the door at the end of the car and into the next one, where he recites his speech again. I hear him briefly, just as he introduces himself to the new crowd, before the train turns sharply and the shrieking of metal wheels drowns him out. I will probably never see Paul again. I’ve seen a lot of people roaming the subways, asking for money and help, but I’ve never seen the same face twice.

It’s 10:00 a.m., and I finally arrive on campus with plenty of time before my 11:40 sociology class. Our lecture today is on social stratification. I decide to kill time by grabbing coffee at a nearby café. When I walk in, I notice a guy getting up from a small table—the rest are all taken. I approach him and ask, “Hey, are you leaving?” He glances at me and turns away, coldly. Did I come across as rude? I sincerely thought he was leaving, and I had asked to make sure. “Yeah,” he replies, “can you give me a minute?” I give him his minute.

As he leaves, he ignores me, and I ignore him back. I decide in that moment that he’s an asshole. And so am I.

Johnathan Fuentes is a sociology major at the School of General Studies and a prospective member of the Flat Earth Society. My Compass Points Sounds runs alternate Thursdays. Find Johnathan on Twitter at @JohnathanAF.